Donate the amount of your choice and download Summer Comes but Once a Year at keithkozel1.bandcamp.com.

FOR several years now, Savannah has rallied around beloved musician and dad Keith Kozel as he battles a rare kidney disease.

Each fundraising event has been inspired by Kozel’s creative spirit and eclectic tastes: a Pee-Wee’s Big Adventure screening at The Lucas Theatre, complete with costume contest; a grindhouse film screening; a punk show at The Jinx, sweetened by a kissing booth from The Savannah Sweet Tease Burlesque Revue.

Now, the GAM, Superhorse, and Shoplifters frontman is reaching out to his community for help and giving Savannah his art in return. 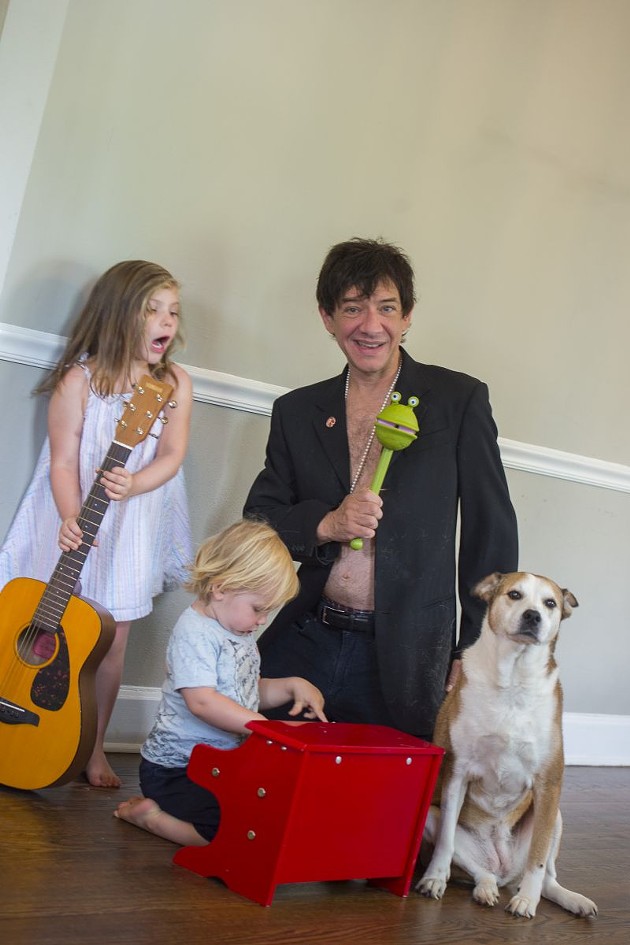 Geoff L. Johnson
Keith with his children, Zeila and Wolfgang, and the family pup.

“Times are tough at the Kozel household,” he shares. “I got a kidney transplant—that was the initial fundraiser—but that was before they could diagnose this rare form of blood cancer. I had to go all the way to Little Rock at the behest of my transplant doctor to be diagnosed. They tried to save my kidney and couldn’t...it’s been a terribly rough year.”

The kidney failure has been particularly hard on Kozel psychologically.

“I have two children, and the doctors were saying the kidney transplant would make me better,” he says.

“I love my family, and we’ve been growing and happy, but it is hard.”

The medical bills are piling up.

“I can’t handle them on my own,” Kozel says. “I’m on disability, and I can’t work harder to pay for them, because I can’t work. I couldn’t in good consciousness ask people for money. I needed to give back something for people to enjoy and give a piece of my heart and soul to people.”

The result is Summer Comes but Once a Year, a compilation of new and old recordings from various Kozel projects. For nine months, Kozel has written and recorded new songs, dug into the back catalog to find lost treasures, and sent it all off to Gene Lyons to mix the tracks down and create a cohesive sound. 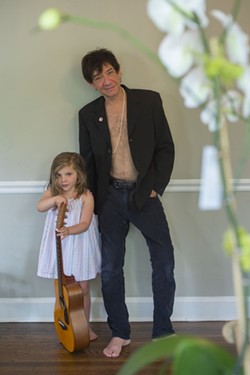 Geoff L. Johnson
"They love to play music, even though they're not very musical yet," Keith says of the Kozel kids.

The recordings were originally made in a variety of places—in practice spaces, at Gene’s studio, at The Jinx.

There’s even a track from Cuddle Bear, Kozel’s project with Lyons and late drummer and Civvies on Broughton/Primary Art Supply owner Robyn Reeder.

“That was in the older archives,” Kozel remarks of “Cuddle Bear Instrumental.”

“Robyn had already been diagnosed with cancer and was already playing drums in Hot Pink Interior. Some of these are older pieces of history. It’s been a long time since I’ve been a local rock ‘n’ roll guy.

“I picked songs that hadn’t gotten much exposure,” he says. “Most have never been released. I just made a list of the songs I wanted and went to work.”

Lately, Kozel has been writing on an acoustic guitar—which, if you’ve seen the frontman gyrating in costume with GAM, belting over Superhorse’s electric guitar army, or fronting his new garage-punk project Shoplifters, may come as a surprise.

“It’s a little less bombastic than people might expect,” he says. “I’d write them on acoustic, sing them, and then we’d come up with an arrangement in the studio and have people play leads.”

Anyone who’s witnessed a Kozel DJ set is familiar with his genre-spanning musical taste, and that varied liking is evident all over Summer Comes but Once a Year.

“At the risk of sounding like a total music tool, I just love music, and I love all kinds of music,” he says.

“There are two funk songs on there—‘Lady Parts’ and ‘Nasty,’ those are Prince-influenced. I listen to a lot of old Delta blues that inspired songs like “Bang Bang.’ Then there’s a rave-inspired song, ‘Rave 112,’ about being at a techno party. I like mashing stuff up.”

The album is available through Bandcamp, where supporters can donate any amount they like and download the 21-track album.

The funds will help cover medical bills for Kozel’s kidney disorder and Waldenstrom Macroglobulinemia, the rare form of blood cancer he is fighting.

Friends and fans will have the opportunity to see Kozel back in action May 17, when Shoplifters opens for The Woggles at The Jinx.

In the meantime, the raw spirit Kozel is famous for can be streamed and downloaded for a good cause.

“I really want people to know that this is not me putting out another record,” he says. “It’s a fundraiser, and I could really use the help. I have talent. I have things I can give to people—this is one of them.”

Art for a great cause