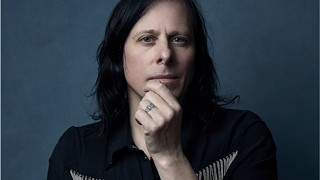 TO SAY THAT Ken Stringfellow has had a storied career would be a major understatement. His initial turn in the spotlight happened in the form of The Posies, the powerpop band he’s been co-fronting with Jon Auer for many years. Their third album, Frosting On the Beater, remains a classic of the grunge era due to its heavier contemporary sound mixed with the smart pop song craft the band had already been known for.

Around the same time as Beater, Stringfellow and Auer joined forces with Alex Chilton and Jody Stephens to form what would be the final version of beloved powerpop pioneers Big Star. That band lasted well over a decade as an occasional outing, even making a studio album along the way. In the mid-90s, Stringfellow was asked to join R.E.M. as an auxiliary member, joining The Young Fresh Fellows’ Scott McCaughey in the backline and taking the same spot previously occupied by the likes of The dB’s Peter Holsapple.

In the late 90s and early 2000s, Stringfellow recorded a solo album called Touched with the legendary Mitch Easter. That album was released on September 11, 2001, inevitably being overshadowed by the horrific events of the day. In hindsight, Touched feels like an eerily applicable record for that moment in time—something Stringfellow himself realized later. Years after that album’s release, Stringfellow is giving the album new life on a solo tour across the U.S. that brings him to many different cities for the first time ever—including Savannah.

He’s set to play Neighborhood Comics on Wednesday, Oct. 2, where he’ll perform the album in its entirety plus other songs that span his 30-plus year career.

“The impetus for this whole tour started with one show in New York City. I was invited to play for the anniversary of a venue, and that venue is where I played when Touched. That New York show was September 20th, and there are some pretty unusual relations with the subject matter of Touched and the kind of mood I was encountering [at the time],” Stringfellow tells Connect.

“There are things about that album that really started to feel like they were commenting on that particular period, even though that’s impossible. So when I posted about this show, people were really excited about the idea. Then it just kind of snowballed, and now I’m playing 50 or 60 shows throughout the country.”

Touched, Stringfellow recalls, was written during a difficult period of his life. Many of the lyrical themes on the album reflect that.

“In those couple of years, I went through a long and stop-start relationship that left me a little bit, shall we say, shellshocked. And, my band, The Posies, broke up during that time and left me a little bit uncertain about where my life was going. And yes, R.E.M. did come through and scoop me up, but there’s some grief and loss [on Touched],” he says.

Working with Easter was something Stringfellow had wanted to do for a long time, as he’d admired the legendary producer and guitarist’s work with R.E.M. and Game Theory. He met Easter when the Let’s Active frontman was playing guitar for Marshall Crenshaw on a gig that The Posies opened.

“I didn’t really get to know him until I was involved in a project he was working on called The Orange Humble Band. I really liked working with him in that context, so then I was seriously talking to him at that point about doing a record at his studio,” Stringfellow recalls.

For Touched, Easter brought in drummer Eric Marshall to play on the songs. They also enlisted longtime Patti Smith Group bassist Tony Shanahan, and sourced local string players for certain songs. The bulk of the record was ultimately Stringfellow, Easter, and Marshall.

“Mitch did an absolutely great job of recording [the record], and doing some very technical things. We had time, too. We didn’t do this record in a weekend—I spent a month there,” he says.

Looking back, Stringfellow says he’s proud of what he did on Touched and feels like the record holds up well in today’s musical landscape. What’s particularly interesting about the record, though, is that the mixes ended up being primarily roughs that Stringfellow himself had put together after recording, rather than more polished or “professional” mixes of the songs.

“Essentially, I mixed the album in one day. I thought that those very simple mixes just had something. The ultra simple rough mixes that I made somehow, because Mitch’s tones were so good, let the songs be. They had a lot of space, and were humble but beautiful. I just thought, ‘Wow, these songs don’t even need mixes,’” he says.

“For all of that, the simplicity of the record presents itself very honestly. And I think, by virtue of that, this record is very able to move from time to time. It doesn’t really get pinned down to one era. We were using completely 1960s technology in some cases, so there you go.”

Ultimately, it’s the emotional weight of Touched that Stringfellow thinks has allowed it to continue resonating after so many years.

“On the two solo albums that I’ve made since then, there wasn’t the same level of trauma and fear and doubt that was in my life making Touched,” he says.

“You can’t fake that kind of stuff, so that gives the record a certain kind of rawness that’s alleviated by how gentle of a record it is sonically. I think those two things together make it really, really special. I think that’s why people connect to that record so much.”