Ken: Produced by Stratton Leopold, Directed/Adapted for the Stage by Tom Coleman III

Leopold's Ice Cream will host an ice social during intermission at each show.

TWO legendary giants of Savannah show biz have come together for a totally unique theatrical collaboration.

Produced by Stratton Leopold and directed and adapted by Tom Coleman III, Ken is based on a short story by Arnold Sundgaard published in the New Yorker in 1959.

Despite years of interest in a movie or play based on Ken, there has never been a stage adaptation of the story. This weekend marks the work’s world premiere.

“There’s this moment when I just got really teary, and way too involved,” laughs Coleman, founder of Savannah Community Theatre and longtime Savannah and Athens theatre veteran who adapted the story for the stage.

“In a couple of places the story really hits me. I’ve really liked working on it.”

A minimalist production with essentially a single set, Ken is the true account of a cross-country train ride taken by Sundgaard during the Great Depression while he was an acting student at the Yale University Department of Drama.

Arnold Sundgaard himself grew up in modest means in Minnesota and was expected to take up farming like his father.

“But he really wanted to go to Yale, that was his goal. And he worked hard for it,” says Leopold.

When a fellow student named Ken Stevens dies, Sundgaard is asked to accompany the boy’s body back to his parents’ home in Portland, Oregon.

“They required that back then,” explains Coleman. “Someone had to physically escort the remains back to wherever they were supposed to go.”

The story centers around his trip, the woman he meets on the train, the loss of Ken’s body, the funeral, and of course the effect all this has on Sundgaard.

“He becomes attached to the fact that he has a mission and people are counting on him, whereas before he didn’t really care about other people’s needs,” Coleman says. “At one point he actually loses the body when he changes trains! It becomes a massive thing to him. He realizes what it means to let people down.”

The way this story found its way from Sundgaard to Leopold to Coleman and now to you is a typical Savannah tale of personal connections.

In the 1970s, Leopold came in contact with Sundgaard in New York City.

“He was opening a play on Broadway, and doing quite well. We talked about Ken and he thought it might be made into a film. I thought it made more sense as a great one-set play. I asked him to write it, since he was a Broadway-produced playwright. But he never did.”

Time passed. The great director John Sayles approached Sundgaard wanting to buy a single scene from Ken to put in a movie.

“But he didn’t sell it. Time goes by and Sundgaard essentially retired,” Leopold says.

About a year ago, serendipity struck as Steve Sundgaard, Arnold’s son, stopped by Leopold’s Ice Cream Shop on Broughton Street for a sweet treat.

“I had not seen Steven in 20 or so years. But we both never forgot the story,” Leopold says.

“Steve asked, ‘What about Ken?’ I said, ‘I’ve always liked it. But I always thought it might have more impact as a play.’”

Steve’s father Arnold had passed away in 2006, “which meant all the rights to Ken reverted to Steve,” Leopold says.

That seemingly small but quite vital legal point paved the way for the production to see reality much quicker than anyone realized at the time.

Stratton Leopold has invited Tom Coleman to lunch. The two men had met and spoken before, but never worked together to this extent.

“Stratton gives me a story, five and a half pages. He says, ‘Here, this was written by the father of a friend of mine. I want you to turn this into a play,’” Coleman says.

“I asked, ‘Why are you giving this to me?’ Stratton answered, ‘Because you can do this. Just look at it.’”

The evocative, moving story had an immediate effect on Coleman.

“Every second I was reading it, I went, this is a film, not a play. It has beautiful language, it’s very picturesque,” Coleman says.

Originally, Coleman wrote the play in first person, with no dialogue, and began communicating with Steve Sundgaard.

“He’s a very kind person, but I could tell he wasn’t necessarily happy with what I had on paper,” Coleman says. “So as I kept writing versions, I began really understanding what this train ride meant. This is a true story of one person’s experience, but I began writing from a much more sympathetic standpoint.”

Leopold says, “Tommy came to me with one version and said, ‘If you hate it, that’s OK.’ I told him, I don’t hate it, I’m figuring it out. I’ve never done this before.”

After a few weeks of nearly round-the-clock writing, Coleman had a script that everyone felt comfortable enough with to hold a reading. The actual cast was determined in May.

“If this is received well, we’re going to approach Yale about taking it to New Haven, since Arnold was a Yale alumnus,” says Leopold.

As if all this weren’t enough, at intermission you can also enjoy—you guessed it!—complimentary ice cream from Leopold’s. 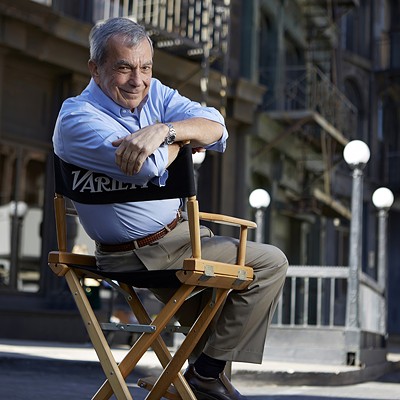