Kevin Clancy: A ‘raging patriot’ beneath the provocative artist

Three-part exhibition on the American flag slated for this weekend

What So Proudly We Hail’d

AT first glance, Kevin Clancy’s work in "What So Proudly We Hail’d" seems offensive. American flags are bleached, stripped of their stars, painted over, seam-ripped.

Americans have been conditioned not to disrespect the flag and this seems to verge into that territory.

However, after discussing the work with him—and he’s more than open to discussion—it seems clear that Clancy might respect the flag more than most.

Clancy, a SCAD Painting MFA candidate, started this body of work two years ago, though he’s always been interested in political work. 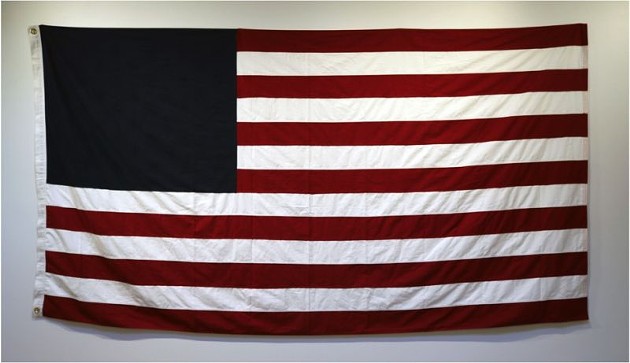 “The first flag I ever painted was in 2002,” he remembers. “I was in high school, and we had just watched the Twin Towers come down live on TV, in history class. I didn’t understand what I just witnessed, so I started reading the news. I became very politically interested. Once I got into it, I just couldn’t stop—that’s all I do now, is read the news. The work I was making back then was more activist-type art. All statements with an agenda, making my personal opinions known. But then you end up alienating half your viewing audience, and the people who do look at it like it and already agree with you. There’s no real dialogue there.”

Clancy decided to take his work in a direction that sparked more dialogue.

“The thing with my old stuff, it was easy to look at it and say, ‘That’s political, I’m not interested in engaging’ and walking away,” Clancy points out.

“This stuff, even though it’s political, because of the material choice, people seem not to be able to ignore it. They have to tell you what they think about it.”

Clancy’s ongoing project, The Fabric of Our Reality (@thefabricofourreality on Instagram) takes the flag apart seam by seam every day. He posts a picture of the flag with the piles of thread each day with several pieces of news.

“I made the first piece with just the three piles in late 2016, before the election, and then I decided no matter who won, I was going to do it,” he explains.

“At first, the things I was posting under the pictures were [Donald Trump’s] tweets, but I got really tired of that really fast. It made the project more about him, which it’s not.”

While seeing the flag dissembled is a little unnerving at first glance, it’s more of a psychological reaction, as Clancy explains.

“If, tomorrow, Puerto Rico becomes a state, we would get rid of the 50-star flag and replace it with a 51-star flag. The object doesn’t have much attachment to it. But by changing its orientation and speaking about some sort of historical idea, now we have to rethink our interpretation of the object.”

Clancy’s manipulation of the flags is thoughtful and intentional. A history buff, he ties in historical elements to his process, like Gov. Sonny Perdue’s 2003 decision to change the Georgia flag (which had already been changed a few years before by Gov. Roy Barnes).

“Everyone chose this design, but this is actually the official flag of the Confederacy,” Clancy explains, holding up a Georgia flag. “If you just cut out the symbol, you end up with the Confederate flag. You have to think they knew what they were doing. You traded an overt racial symbol for a covert racial symbol.”

Essentially, that’s Clancy’s point: since the American flag is used as a symbol, it’s important to examine what that means.

“And I really love this symbol. But it also is just a symbol, and if it stands for freedom and we don’t have the freedom to look critically at it and think about what it means and what we do in its name, then where are we?”

Far beyond the NFL’s current anthem kneeling controversy, the flag has for years been used in ways that disenfranchise others.

“The manipulation of its display and the historical nature of the object—you can’t dissociate feminism or racism or class warfare or world wars,” he says.

“You can’t look at it without those; those things are embedded in there. I manipulate it to bring those forward. If you think about the last hundred years, the flag encompasses everyone and is kind of our collective object, but the state uses the flag as a tool to limit its meaning,” he says.

“You have football players who kneel and they’re disrespecting the troops, but when they stretch the flag out over the field like that—that’s not allowed. The flag can never be held horizontally, aloft only.”

Clancy’s more than met his goal of starting dialogue. He shares stories of people who are at first confused or even angry who, after hearing him out, were more open to the project.

“I have met people on both sides and the ones who didn’t like what I was doing, after talking to me, they at least saw I wasn’t doing it to get a rise out of people,” he says.

“It’s not like I’m just piling it up and throwing it on the floor with no conceptual idea behind it. I can see how people would feel it’s disrespectful, and I respect that opinion, but frankly, I think I’m a raging patriot. I love America so much that it makes me sad.” 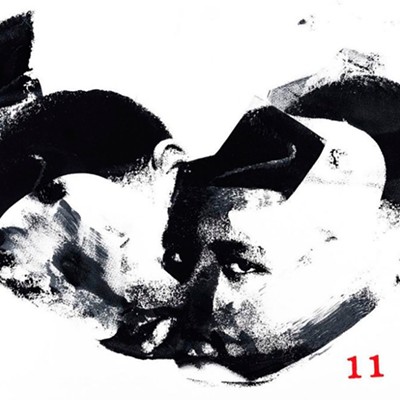