For Kelie Miley of the Savannah Children's Theatre, they're equally as important

Kelie Miley opened the first Savannah Children’s Theatre in the back room of a downtown church, with six kids, in 2003. They did two shows that first year.

Today, nearly 300 children are at the theater every week, Miley says, “actively doing something,” whether it’s taking singing, acting or dancing lessons, rehearsing a show, hanging curtains or painting a set.

Six years ago, the theater moved into a massive (32,000 square feet), two–story building on Victory Drive, the shell of a Belk’s department store that had closed in 1998. Now the Children’s Theatre averages about 40 productions, open to the public, every year.

“This was an idea to start a non–profit with pretty much zero capital, and we’re very proud that we’re still in existence,” says Miley, a Chatham County native. “I’d always wanted to have a children’s theater in Savannah, from the time I was around 12 years old.”

This week, the SCT opens Andrew Lloyd Webber’s Joseph and the Amazing Technicolor Dreamcoat, its summer musical. Although many of the shows feature age–specific students (i.e. elementary school kids or high schoolers), the two annual, extra–large mainstage productions are cast with adults and teens from the community, along with SCT regulars who must audition for roles.

The winter production this year was Annie.

“We want to go full–out, we want to give it big budgets and big production values and do our best,” Miley explains. “And everybody loves big giant musicals.”

The success of the Savannah Children’s Theatre is particularly inspiring because theater programs are all but gone from public learning centers these days – with the exception, of course, of high schools, where the dramatic arts are still encouraged.

With a fulltime staff of six, and contracted workers hired as needs dictate, Miley – the theater’s artistic director and one of its teachers – finds herself filling a void.

Not that it’s been easy.

“The amount of volunteers I have – people working 40 hours a week or more – is enormous,” she explains. “People have jobs and families. And none of it could be done without them. Because we obviously don’t have the revenue to support that. So it’s a labor of love, still.

“Six years is still pretty young. But I think it’s a milestone to still exist, especially with how the economy hit us two years ago.”

Miley had left Savannah for Los Angeles, where she acted professionally, graduated from the American Academy of Dramatic Arts and earned a BFA in theatre from California State. She also developed programs for several California children’s theaters.

“I have worked in professional theater, in my youth, and it seems a little more narcissistic than I wanted to spend my life in.”

She returned home in 1993, and was hired as the artistic director for the City of Savannah’s Dept. of Cultural Affairs, a position she held for 11 years.

She left that gig for the church backroom and an uncertain future. “I have more freedom as the creative head of a non–profit, instead of a – very kind and generous – government organization,” Miley chuckles.

Even as the boss, Miley is extremely hands–on. She and her father drove to Hollywood, Fla. in a U–Haul to pick up the 150 plush, purple seats that are now in place for mainstage shows. They had been offered – on one day’s notice – by the Hard Rock theater, which was remodeling.

The SCT’s black box theater seats came from a shuttered 1970s movie theater in Orlando. Miley got the call that they were being donated.

“They said they’d all be stacked and waiting,” she recalls. “Well, they were still bolted to the floor. With no electricity. And just me and a U–Haul truck.”

She got out her wrench kit and did all the work herself.

Miley says her goal is to teach young people about the intrinsic value of collaboration, in a creative environment. Often, children enter the program believing it’s just a stepping–stone to big–time celebrity.

“I certainly understand why they do, and some of them certainly are capable,” Miley explains. “That doesn’t mean for sure. I’m not a pre–training program for degrees – which I try to tell their parents. Although I’m supportive, helping to prepare for auditions et cetera, because many of them do go do that.

“They all come in, depending on what age, with a different concept of what it is they’re going to be doing. Most of it is, in their brain, self–serving: ‘People are going to watch me and clap for me, I’m more talented than that person,’ that type of deal.

“Auditions are tough. And if they stay, if they can get past this concept of what they think ‘being a star’ is, they get that they’re creating and collaborating and learning perceptions about other people, and other cultures. Getting into other people’s skin.

“And their parents very often come in and say ‘This is so much more than I thought it was. I thought we were going to come and watch a show, but my child has learned so much from this.’”

Miley’s own children, ages 16 and 11, also take classes and perform.

“Somebody just asked me, ‘Do you ever get bored with this?’” Miley says. “There’s a lot of things, but it’s never boring. I have never regretted it, not one day.”

Joseph and the Amazing Technicolor Dreamcoat 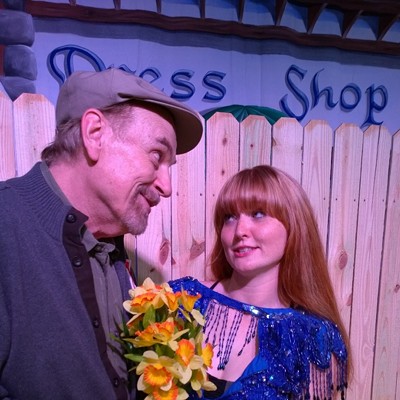