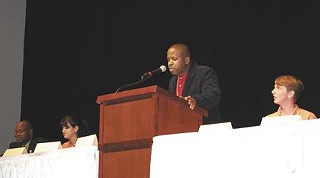 It wasn't to perform, but to talk to kids about the importance of education and to reassure them that if he made it from humble beginnings in the Westside's Frazier Homes, then they could do the same if they focused on being leaders rather than followers.

The talk, which drew several hundred kids, parents and community leaders, was the public side of the Youth Futures Authority's Annual Youth Summit, and was sandwiched between two full days of rigorous meetings.

At the center of the summit discussions was the YFA's annual report, formerly known as the Community Profile, and now known as Kids Matter!, which gathers data from YFA partners like the school system, Health Department and Department of Juvenile Justice, among others, to give a depiction of progress being made on youth issues.

According to YFA Executive Director Edward Chisholm, who took the reins in December, changing the name of the report to Kids Matter! was an important signifier of the re-focusing of efforts to help local youth.
"I wanted to get back to our roots, and to communicate to the community that this is the core of why YFA is in existence, that kids matter," Chisholm explains.

The changes between last year's report and this year's run far deeper than just the name though, and one of the most important aspects is found in how the data is presented - now looking at year-by-year trends, rather than annual snapshots of data.

"We've discovered that just giving a snapshot in time of any condition is not enough information" says Chisholm. "This profile is going to be different because we will have substantially more trend data to look at those areas of child well-being. Our job is to take that data and in partnership with them do a level of analysis why are the numbers the way they are."

This year's report paints a portrait of a community that continues to struggle with many problems that have remained statistically consistent regardless of time and effort.

23.8 percent of children under the age of 18 live below the poverty line in Chatham County, compared to 34.3 percent in Savannah - a statistic that is one of the most troublesome considering it has changed little in over a decade, and in spite of the economic growth the area saw prior to the recession.

The data isn't all negative though, and among the positives are the school system, which has seen a decrease in the total number of dropouts, out of school suspension and truancy.

The health sector also saw some improvements, with decreases in low and very low weight births, and a significant improvement in the total infant mortality rate from 13.1 in 2006 to 8.7. The IMR, however, still remains above both the state and national averages.

One issue that has been at the forefront in recent years has been crime, which mirrored the mixed bag of results found in the rest of the sectors: Juvenile arrests rose last year to 1,205 from 1,088, as did the number of charges against juveniles, but the number of delinquent referrals by Juvenile Court was down, as was the number of unique youth served.

Although the YFA's role is to facilitate progress, rather than enact sweeping changes, Chisholm recognizes that many of the problems illustrated by the report have been problems for quite some time, and that they will continue until positive action can be taken.

For him, one of the major issues within the numbers is the evident racial disparity in almost every sector of data, and most notably in crime and health.

"We're not going to reduce the overall numbers until we reduce the disparity between the races," says Chisholm. "That's what the data tells me: teen pregnancy, teen birth, out of school suspensions, those numbers are consistent and that disparity is consistent."

One of necessities for fixing the problem is to have everyone possible on board to do their part. While the YFA has gained some new partners in the community this year, most notably the Step Up Initiative to reduce poverty, there have been many other groups that have severed ties with the YFA.

At the forefront, according to Chisholm, should be that kids matter, something that should supersede politics or finances.
"Kids matter," says Chisholm. "They matter to all these different areas, and unfortunately over the years, a lot of people have walked away from the table and we need them back at the table."