AS OUR food industry continues to take great strides moving forward, we will see growth in places that we might not normally expect.

The tourism market is expanding every year, therefore I believe we will begin to see tourism spread into the nooks and neighborhoods that have been shaped by locals.

The art scene perpetuated by the influx of students coming to study at SCAD is beginning to see the potential the city has to offer for the future. As city officials and government leaders are starting to see the value in ideas presented by locals, we are beginning to be met with less resistance, and instead are being met with solutions to the problems that may be presented. One subset of our food industry that is often slept on is the hotel restaurant industry. Most people view restaurants that exist in hotels as part of the corporate chain, and unfortunately most locals in our city avoid those spots; which isn’t necessarily our fault.

We have been conditioned based on our experience that most hotels are catering solely to the tourists flooding their rooms, instead of finding opportunities to make locals feel involved. So that connotation ends up stretching to most hotels in the downtown area and beyond.

But through this recent growth, even hotels are beginning to recognize the value and potential that our locals provide for the now, and the future. These large hotel groups are utilizing the culture of the cities in which they are stationed, to designing their menus for not just the tourist, but for the locals as well.

We were invited to attend a private tasting at Kitchen 320, on the first floor of The B Historic Savannah downtown on Montgomery Street. We all had a chance to take in the inspiration, flavor, and pairings of their menu, created and designed by Chef Will Herrington. 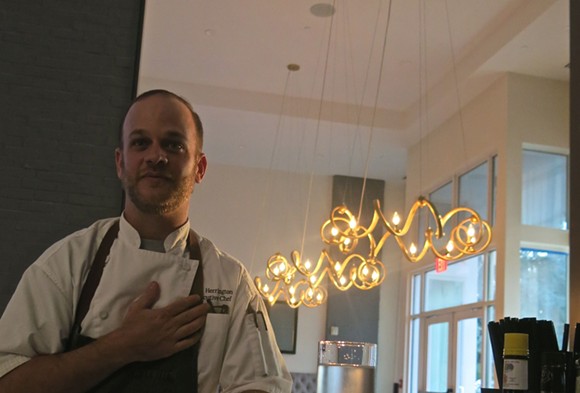 Born and raised in Statesboro, Will was raised to be hands-on, and had developed a strong relationship and respect for nature and food. Growing up on what was essentially was a farm, he learned how to grow, humanely kill for meat, and prepare food through traditions and recipes passed down for generations.

Because of the freedom and creativity granted through B Historic Savannah, Will was able to truly be himself when creating this menu, which allowed him to have a personal relationship with every item on the menu. Not many restaurant groups would allow a chef to have complete creative reigns, and give him an opportunity to put himself on a menu.

Taking us through the Lowcountry, Chef Will provided a taste of his home in every course that would brought out. With family style plates, we all got a chance to share and talk throughout the night, as they paired drinks with every course.

First, we had a chance to sample some of their appetizers, all of which had a story behind them, which all struck home for Chef Will. The Blue Crab app served with a grit cake, was one of my favorites. A spin-off of a traditional dish, it was executed in a way I had never experienced. The blue crab was soft and flavorful, and the grit cake was spot on.

One of my favorite aspects of their menu is their local collaborations. From Hunter Cattle and Canewater Farms, to Savannah Bee Company and Leopold’s, Kitchen 320 makes a commitment to engaging in the local economy, and serving the local communities. This menu felt unique in its design, and used traditional flavor pairings in non-traditional ways.

Their sweet tea chicken wings plate was a dish that took a lot of preparation, but is worth the time and intention. Served with a side of spicy Lowcountry aioli, this dish is something that exemplifies the south, and is an approach I have yet to see. Traveling into the main, we were given a sample of their Hunter Cattle skirt steak, which was served with their rendition of “Southern Caviar” which is pickled mustard seeds alongside smoked potatoes.

I will give it to him, this dish was very well rounded, and was extremely flavorful, especially paired with a delicious red. We finished the evening with their official original Leopold’s flavor of ice cream with candied ginger, Savannah Bee honey, blueberry compote and lemon chantilly cream. Well thought out, and extremely delicious.

All in all, I wouldn’t have expected this kind of thought and intention to come out of a hotel in the downtown Savannah area. Most of the big business brought here is motivated by the trends of the tourist rather than what locals are interested in.

From the Rocks on the Roof over at the Bohemian, to 22 Square at the Andaz, and now Kitchen 320 at the B Historic Savannah, you can find great drinks, thoughtful service, and flavorful food in places that you wouldn’t normally expect. Step out of the box or your normal routine, and try something new. Let’s keep stirring that pot, people. 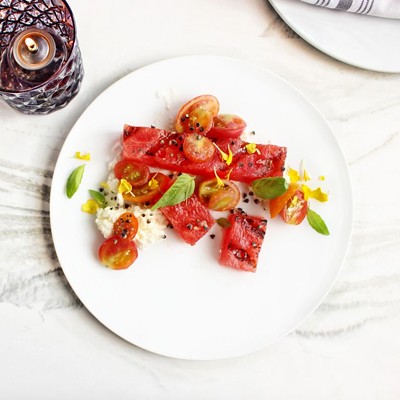