OVER THE past few years, Savannah has accumulated a collection of diverse eateries that, perhaps unwittingly, all serve the same purpose. With each new restaurant, restaurateurs and chefs seek to influence the food scene and its consumers by either going back to their roots, innovating with avant-garde flavors or concocting an amalgamation of both.

This upsurge is not only broadening palates but also forging Savannah into a culinary destination.

“The food scene in Savannah is starting to blossom; we are about to pop. This is something the city needs to take it to the next level. We are on a trajectory to be one of the best culinary scenes in the country,” reports Executive Chef William Herrington of Kitchen 320.

Kitchen 320 is the signature restaurant and bar in the B Historic Hotel that resides on Montgomery Street. It may be downtown, but its off-the-beaten-path location brands Kitchen 320 as a best-kept secret among locals. 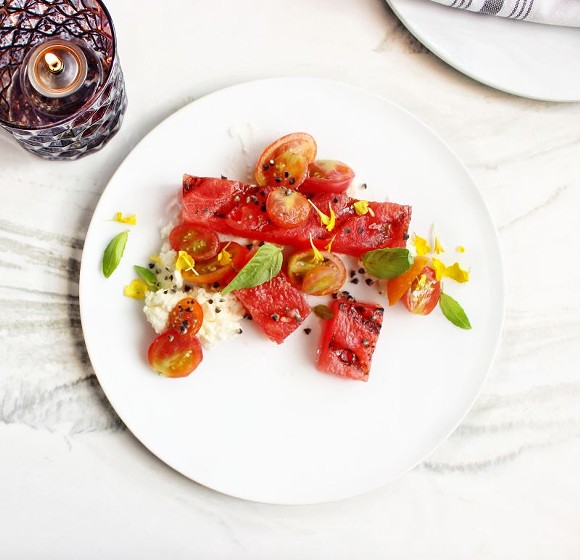 Chef Herrington has been with Kitchen 320 since its conception, opening the restaurant in November 2016. Since then he has contributed to Savannah’s evolving food scene by serving sophisticated soul food inspired by his upbringing.

As a child growing up in Waynesboro, GA, Herrington was no stranger to Lowcountry cuisine. With a population of 5,700, restaurants of any kind were scant, making going out to eat a rarity.

Herrington reminisced about helping his mother cook meals like Hoppin’ John and field peas, never realizing its impact on his future.

“It resonated with me...I was always enamored with cooking.”

After receiving a culinary degree, Herrington gleamed experiences from a variety of cities working with a range of fare including French, Italian, German and Caribbean. Yet, when the opportunity to establish Kitchen 320 came, Herrington saw it as a dream come true.

“It is a blessing to be able to cook the food I grew up with,” he says.

Now, Herrington utilizes Lowcountry nostalgia as a foundation for his upscale and cultured cuisine. By doing so, he seeks to incorporate influences from other regions while simultaneously modernizing southern dishes.

When entering the B Historic Hotel, its grandiose space is lavished with rich tones and textures, radiating with refinement. Just past a charcoal slate wall, embedded with wooden logs, resides Kitchen 320.

As of last week, Kitchen 320 showcased a new summer menu that capitalizes on farm-fresh simplicity.

A majority of the menu items are composed of small bites at approachable prices. These dishes are created for sharing, serving as a conversation piece.

At the menu tasting, Chef Herrington delivered each dish to the table, describing its humble ingredients and personal inspiration.

The first course was a Tomato and Watermelon Salad that emulated the refreshing flavors of summer. Herrington partnered with Canewater Farm in Darien, GA to provide the freshest heirloom tomatoes for the dish.

The tomatoes were pickled in sherry and rice wine vinegar, offering a briny and bright flavor. This was paired with grilled watermelon, lending a subtle sweetness. They were served on top of a horseradish, mascarpone and goat cheese whip that was creamy and tart with a slight pungency.

These ingredients were showered with bright basil blossoms and crystalized mint. The mint provided tings of invigorating sweetness with each bite. Overall, this dish was reminiscent of a southern caprese salad.

The fennel puree was the star, providing a subtle smoky flavor that complimented the sweetness of the scallops. This dish was balanced, harmonizing each ingredient in its truest form.

Herrington pointed to the golden fried cakes and said, “Those are used as your sopping device.” The scent of comfort wafted from the cast iron skillet of peas. The familiar flavors of chicken broth, rendered bacon, sweet corn bread and tender peas embodied nostalgic coziness.

Chef Herrington took a dish that is typically served as side and elevated it to main status. My only critique? More hoe cakes, please!

The fourth course was the Lowcountry Paella. Chef Herrington incorporated as many ingredients from Savannah as possible, serving his own rendition of the classic.

This dish was comprised of zipper peas, Carolina gold rice, Hunter Cattle sausage, Georgia white shrimp and smoked Sapelo clams served in a fish fumet broth. This dish was hearty and well rounded with a welcomed heat that lingered on my taste buds.

The dessert course had two finales. The first was a creamy scoop of Leopold’s ice cream with Savannah Bee Wildflower honey, candied ginger and blueberry sauce.

Herrington partnered with the chef from Leopold’s to create an ice cream that is unique to Kitchen 320. The zippy ginger balanced the sweetness of the honey and blueberries. It was everything a summer ice cream should be, decadent yet refreshing.

The final course was a riff on an adult friendly dunk-a-roo. Sorghum spiced cookie sticks were served with a banana buttercream dip. For the cookie flavor, imagine a ginger bread cookie without the ginger. This was a delightful way to end a fantastic meal.

After a dining experience like this, it is clear that Chef Herrington seeks to commemorate not only the Lowountry, but also specifically Savannah. He continues to partner with local farms and host events that build and boost our community. He aspires to continue his contribution to Savannah’s culinary future at Kitchen 320.

“It’s a pleasure and honor to be in the food scene in Savannah at this point in time.”