The Industry: Curating Art for Public and Private Spaces 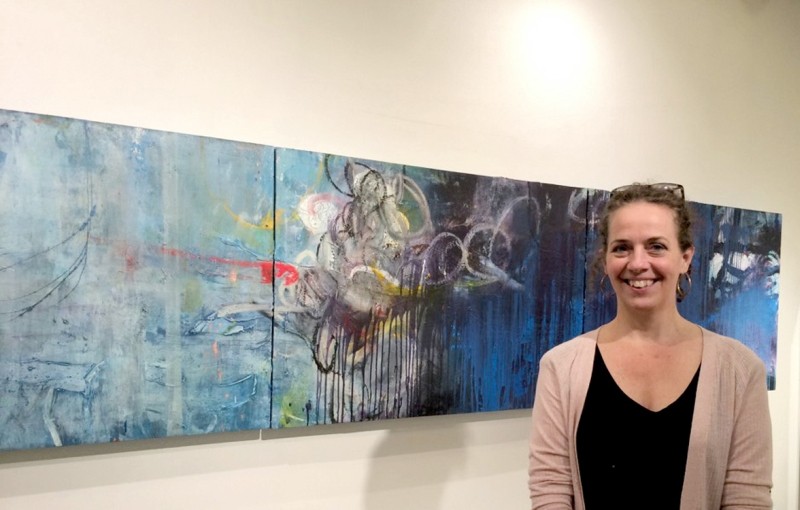 Deb Oden, painter, printmaker and co-curator of “The Industry,” stands before her contribution to the Kobo Gallery exhibition.

“You know there’s something about having an artwork be larger than us—that you can go up to it and you can lose yourself. You don’t have to think about yourself,” Oden says.

“You can be immersed” Edwards responds.

The work is nearly complete. Unlike many large pieces in Savannah, this one is destined for a gallery wall.

It will be featured in Kobo Gallery’s weeklong exhibition “The Industry” alongside other large-scale works created specially for this exhibition.

One of the bedrocks of Savannah’s art scene, Kobo is a cooperative gallery featuring contemporary art from both established and up-and-coming local artists.

With “The Industry,” curators Edwards and Oden will highlight Kobo’s 2 and 3-dimensional artists.

While many of Kobo’s painters, mixed-media artists and printmakers prefer facing down a large canvas, this is a rare chance for them to display this aspect of their art making to the public.

With 15 artists in the gallery it’s rare to see a 12-foot piece. Usually each artist displays between 4 and ten small or mid-sized pieces on their designated wall space.

“For this show, it might be that you can just show two big pieces. We’re economizing our walls so the pieces have enough room. You need air and breath around them,” says Edwards.

There’s a gamble in limiting the number of works available. Oden and Edwards are mitigating this with added storage racks for smaller works and a hanging rack for works on paper.

“We’re moving everything. We’re disrupting everybody’s lives to hang these big pieces for a week and show people what else we can do,” Edwards says. 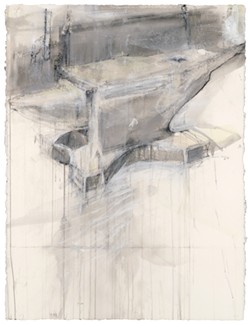 Despite the challenges of working large, which include studio space limitations, transport complications and the lack of opportunity to display larger works, Oden and Edwards have a passion for expansive art.

“With large works, I get a body connection because I see the body movement. With a line, you see a whole arm moving across the line instead just half a hand moving across that line. Being able to see that with larger work is what’s exciting for me. It’s human scale,” says Edwards.

While artists face definite issues when deciding to work large, there is a demand for art of a certain scale.

“I feel like whenever we’ve had monster large works in the gallery they get a great response and people are really interested,” says Edwards.

It is the call for large work from both collectors and commercial clients that “industry” refers to.

“We wanted to reach out to the large industry of art making and art consumers—interior designers, the art consultants, the hotels and the business owners—to invite them all in,” says Edwards.

“I also linked it to the industry of the artists; the industrious nature of the way we’re working and producing,” Oden adds.

For this exhibition the Kobo artists are reaching out to remind the public that the work they are often seeking is right here, even if it is not always on display.

“You get so caught up with making and being in the gallery that you don’t get a chance to go out and meet these people that you want to reach,” Edwards says.

This exhibition has been the impetus for beginning new conversations as well as re-engaging support each artist already has.

Oden and Edwards intend for this show to plant a seed and open imaginations to the possibilities that come with large work.

“With this show people are going to be able to see—all of us have our distinct own voices—but they’ll be able to see our interpretation of what large is. Then they can take that back with them and go into their spaces and re-think their own ideas of how they can use the space that they have available,” Edwards says.

In Oden’s studio, the two artists continue to stare into the massive painted surface. There is a true majesty to a work of its size.

“The fearless part is that if you’ve got the inclination to experience this process that is larger than yourself physically—you’ll be able to find a way to let it see light,” Edwards breaks her gaze to say. 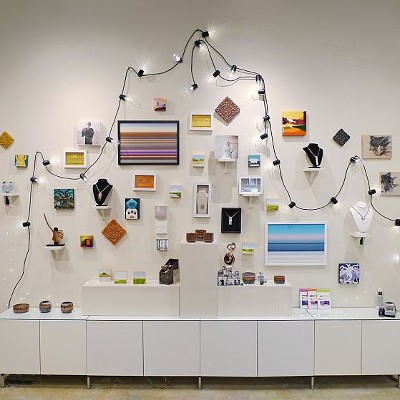