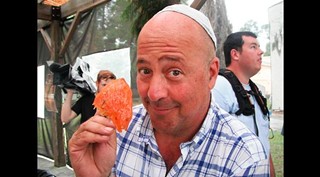 "I eat enough pig and shellfish to make my rabbi's toes curl."

IF YOU live in Madagascar, eating stickbugs seems completely normal.

The Bizarre Foods host and his crew swept through the Savannah to film a few episodes about the Lowcountry while the eight–day harvest festival of Sukkot was in full swing.

“Not a lot of people around the world know about the heritage of Southern Jews,” said Zimmern, who’s broadcasted in over 70 countries. “I always like to do a little mythbusting on the show.”

Under the sukkah (the traditional outdoor structure built for the holiday), around a centerpiece of dragonfruits, figs, berries and other exotic fruits, Zimmern kibbitzed and schmoozed in the rain with the congregation’s rabbis and families.

His presence caused plenty of excitement with the elderly residents of Buckingham South assisted living facility next door, where Zimmern helped Chef Matt Cohen prepare kosher dishes to serve to the sukkah guests outside.

“That guy eats so many different animal testicles that when he walks through the zoo, all the animals cross their legs,” joked BBJ member David Eichelbaum while waiting for the trays to appear.

It was reported that a pair of young women dressed in tight pants and tank tops showed up before the filming and introduced themselves as “the waitresses” but were sent away in keeping with the congregation’s observance of modesty.

Zimmern, who is Jewish, said he felt plenty comfortable in a kosher kitchen where dairy and meat preparations must be kept separate along with other culinary restrictions. But obviously his career path prevents him from observing halachic laws: “I eat enough pig and shellfish to make my rabbi’s toes curl.”

Cohen and business partner Murray Gottlieb (of the delicatessen Gottliebs in Savannah’s days of yore) have recently launched New South Kosher, a “virtual restaurant” that markets Cohen’s innovative New Southern cuisine to the kosher community and beyond. Lunches, dinners and catering are available for pick–up and delivery through their website, gottliebandcohen.com.

“What Matt and Murray are doing isn’t so much bizarre as remarkable,” said Zimmern admiringly as he dodged raindrops under the sukkah’s thatched roof. “They’re taking Jewish grandma food and getting creative with it.”