La Scala: Italian from a team of culinary all-stars

IF YOU’RE a local, you have probably noticed the magnificent pink Victorian that sits on East 36th Street by now. What looks like a grandiose home of Savannah’s elite is not that at all, instead housing Savannah’s newest upscale authentic Italian restaurant, La Scala Ristorante.

The bold duo behind the massive undertaking, Donald Lubowicki and Jeffrey Downey, have been a part of the food scene of Savannah for over a decade. So when the two located this particular empty home, the restoration of the historic space began.

What would prove to be quite a challenge was stalwartly conquered by the two who have now ran Circa 1875 for many years.

“Our love is food and libations. We were getting phone calls from people asking to take parties of 50, and we had no room there for that [at Circa 1875].  Right then and there, we outgrew the place. At that point we started looking for places around town and, three and a half years ago, this came on the market. We purchased it and the rest is history,” Lubowicki’s remembered on La Scala’s beginnings.

During my visit, I was given a tour of the immaculate three story Victorian, which emanates that Savannah feel from the very foundation. Lubowicki proudly guided me through each room, narrating the work that it years of research and preparation to accomplish.

I could have stayed for hours learning about all of the zeal that was placed in picking every single adornment by Lubowicki and Downey. Nothing was forgotten—even the powder rooms are orante.

When you walk in, the towering staircase, reminiscent of the old home’s vertebrae, strikes you. Each room has a speckling of dressed tables, antiques, imported European fixtures, and almost all have mantles. As you pass under each archway, you are transported to a different region in Europe. Even the downstairs bar, which I would consider the most important part of any restaurant, was made just for La Scala.

Besides the cool, cave-like wine cellar that sits below the grand space, the most breathtaking room of all is the chapel on the second floor—a vestige from the Catholic Diocese that once inhabited the home. The space is rentable and would make for an intimate wedding venue.

Executive Chef David Landrigan is from New York and has been working in kitchens since the age of thirteen. After gaining experience from various northern kitchens, Chef Landrigan completed culinary school at The Culinary Insitute of America. After moving to Savannah, Chef Landrigan worked with The Olde Pink House before joining the Circa 1875 family.

Chef McLain worked as the Executive Chef at Alligator Soul, a Sous Chef at Leoci’s, and many other local well-known Savannah kitchens. He was quick to inform me that he owes all of his culinary education to his grandmother, who owned several restaurants south of Nashville.

“We always try to do a seasonal menu. With the seasonal menu approach of this restaurant, we are trying to focus on regions of Italy. On the autumn, winter menu we have been focusing on the northern regions, coming into the spring we are going to focusing more on the central regions like Tuscany and Emelia-Romagna. Summertime will be a lot more Calabrian, Sicilian, Southern Italian.”

The ingredients are procured from local sources including Russo’s, Vertu Farms, Savannah River Farms, Joseph Field Farms, Ed Fields Coffee, Kachina Farms, and Canewater Farms. Lubowicki elaborated that their “pasta is also sourced locally, from Frali. We are really trying to tie into the community.”

A quick glance at the menu and you can see that every single locally procured ingredient was calculated in its application and expertly used. 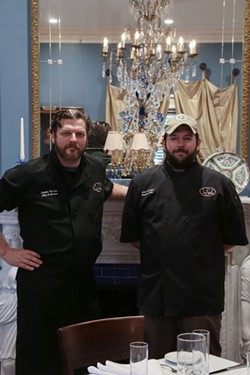 Fettuccine Fruitti di Mare includes a beautiful, night-sky-black squid ink fettuccine pasta layered diver scallop, Georgia shrimps, Little Neck clams, and octopus. Each piece of seafood your fork finds is more tender than the last. The scallop is hard seared to create a crunchy shell, yet the inside is sweet and delicate. My favorite shrimp are our coastal shrimp because their meat is sweeter than most, and these did not disappoint.

The Branzino Arrostito is one of La Scala’s more popular dishes. A hearty roasted sea bass is served with artichoke, risotto peppered with fresh herbs, charred broccolini, and lemon.

Just as popular with loyal patrons is the Osso Bucco, a true Italian classic of roasted veal shank.  The Chefs serve their version featuring roasted squash and cippolinis, a type of onions, risotto milanese, and gremolata.

Lubowicki was quick to tell me about the Pollo Mattone, saying “the roasted chicken will blow your mind.”  Not only is the chicken extremely juicy but it is well balanced through all of its accompaniments. Sweet figs, briny olives, peppery arugula, and creamy polenta are paired with this superstar.

As for the preparation, Chef McLain explained that they “beer brine it overnight. The beer brine has oranges, coriander, bay leaf, and some cinnamon sticks. You get a lot of those spices’ notes inside of the chicken as well as all of the maltyness of the beer. The cooking technique is really simple—it is an old Tuscan cooking technique. We put it on the grill and put a brick on top of it. It flattens it out as it is grilling and gets the skin really crisp.”

The Chefs are even making their own desserts. Chef McLain gave me the rundown on the dessert menu.

He said, “Right now we are making all of our desserts in-house except for our sorbets. We make tiramisu, panacaot, a really nice Meyer lemon cheesecake, chocolate torts, and biscotti.”

The building may be the gorgeous Victorian architecture that you probably pass every day, but inside of La Scala, you are transported to a villa in the hills of the Italian countryside with a dish in front of you that would make any Nonna exclaim, “Bellisimo!”