For more info go to textilesocietyofamerica.org/tsa_symposium/symposium2016/

THIS WEEKEND, the Textile Society of America, Inc. hosts its biannual symposium on all things fibers at the Hyatt Regency. "Crosscurrents: Land, Labor and the Port" has the potential to start an important conversation about textile production and development in Savannah.

“I think we have such specific potential for textile development,” says Nathan Saludez, special projects director at Art Rise Savannah.

“There are very few small textile mills in the country, particularly in the South. Here you have access to the cotton being grown and this is a major world port so I think there’s opportunity for production, development and manufacturing textiles. Getting people here first [is key]—they have to have that introduction to the city first, but you know everyone who comes here falls in love with it.”

The symposium plays a crucial part in getting people to Savannah—the TSA has members around the world, and the symposium attracts about 500 people.

Three SCAD professors—Susan Falls, Jessica Smith, and Liz Sargent—are also members of TSA and convinced the association to bring the symposium to Savannah because of its historical relationship with textiles.

“We have such a rich history with cotton,” Saludez explains, “so the title of this symposium, ‘Land, Labor and the Port,’ show how these things have affected textiles and how the textiles affect the city as well. It’s not limited specifically to Savannah. It’s a conversation—you know a little bit about someone else, bring up your own things.”

This year’s event is unique because for the first time, a series of exhibitions accompanies the symposium. Seven local galleries will host exhibitions free and open to the public, unlike the symposium, which is only open to TSA members.

The exhibitions are eclectic in topic, from shibori to quilting to digital hand weavings, and were all juried.

“The point of exhibitions is to start a conversation,” Saludez says. “The quilt exhibition I’m working on “Between” is more traditional applied art, but these artists take it into a whole other place of fine art. I think that some of the shows are challenging in a really great way.”

Falls, Smith and Sargent approached Art Rise for help with the event because, as Saludez explains, taking on the project with only three people can be overwhelming.

“The SCAD professors were coordinating these shows, but they had eight exhibitions—now it’s seven—and having three people to do that many exhibitions is quite impossible,” he says. “They needed help coordinating the gallery spaces, and TSA is also a nonprofit with limited funds to make this happen.”

The diversity of the exhibitions speaks to the nature of textiles and fibers as an artistic medium.

“There’s the potential for functionality or to be fine art with no practical function,” Saludez notes. “You can take it in any direction; it’s a very expansive medium.”

There’s also an artist talk planned for “Between: Layering Context and Perception in Patchwork” at Jelinek Creative Spaces on October 19. Curator Molly Evans Fox will introduce the artists’ work and discuss how they were chosen, and artist Sonja Dahl will discuss her practice. This event is notable because it’s the only artist talk of the weekend free and open to the public.

Saludez notes the community’s hand in pulling off the weekend, and the range of people involved speaks volumes of the broadness of textiles as a medium.

“The community has really come through and supported this,” he says. “What’s funny is when we had the call for volunteers we were expecting maybe ten people to come to the meeting, and we had 30. People that aren’t specifically affiliated with SCAD or other arts organizations, and a whole mix of students, older people, mid of people that have some sort of interesting aspect in textiles. So we went around the room and talked about what we did and everyone had such a diverse background.” 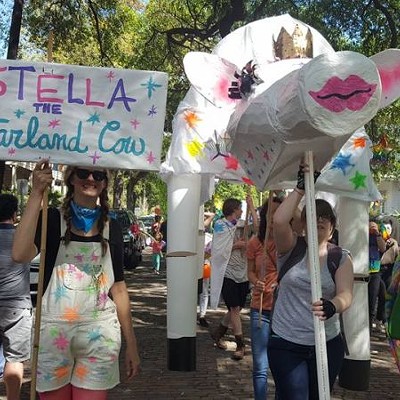 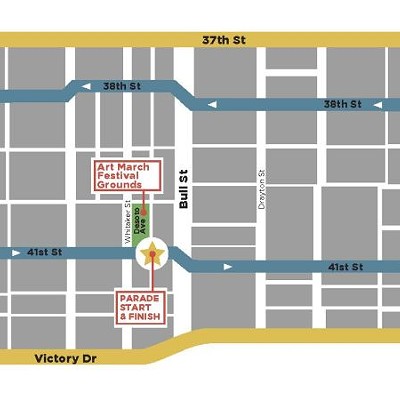