SAVANNAH is somewhat notorious for citizen apathy. But if you want to know what it takes to get us into an uproar, mention the possibility that we might lose our treasured National Historic Landmark District status.

The new report commissioned by the National Park Service (NPS) that broke last week isn’t quite that dire.

Indeed, the NPS itself says point blank that “the Savannah National Historic Landmark District is not in danger of losing its designation... This year’s report was commissioned to provide complete data about incompatible changes that had occurred and have been proposed.”

However, the report does recommend that the NPS move the Landmark District not one but two spots worse, from “Satisfactory” to “Threatened” status.

The public response was quick and angry, much along the lines of “We tried to warn you about all those new hotels.”

While the report neither focuses only on hotels nor does it revoke the District status, it’s remarkable how quickly the report tapped into what is obviously a preexisting vein of serious public angst over new development downtown.

The report to the NPS cited two primary reasons for concern, which were by no means limited to hotels:

1. Increased volume and scale of development, specifically height and mass;

2. Degradation of the original and still-revered town plan established by James Oglethorpe three centuries ago.

(Background: The Landmark District was designated in 1966, ironically the same year the classic DeSoto Hotel was demolished. It’s bounded by River Street to the north, MLK Jr. Blvd. to the west, Gwinnett Street to the south, and East Broad to the east, with a 1977 addition to include Trustees Garden. Neither the proposed new Arena and Canal District nor Savannah River Landing are included.)

The East River Street skyline with a cargo vessel coming through.

“Several larger forces were identified as the root cause of many of the district’s most imminent threats, such as the rise in tourism and continued use of an outdated zoning ordinance,” the report continues.

“With tourism at an all time high, efforts to accommodate this population have led to many of the threats previously mentioned, such as the incorporation of numerous new hotel buildings, reuse of existing structures as STVRs, as well as a variety of other changes,” the report says.

While hotels are the focal point of the public’s ire, non-private sector buildings such as the new Cultural Arts Center are also noted in the report as problematic.

Also mentioned are some rather far afield items such as noise pollution — which, though important, one assumes isn’t germane to a Landmark designation.

There was a bit of confusion over the recommended status change.

The NPS report says the last full assessment was done 16 years ago, in 2002, when the Landmark District was placed on the “Threatened” list.

The day the report broke, the City of Savannah entered damage-control mode and rushed out a press release later that afternoon saying the District “was designated as ‘Priority 1 Threatened’ when it was last assessed in 2002, and it is recommended in this report to remain at ‘Priority 1 Threatened.’”

This is not totally accurate. Turns out the NPS had quietly put Savannah back on the Satisfactory list in 2006.

To be fair, the reason was quite specific and relatively minor: The out-of-character intermodal CAT terminal ended up being built west of MLK, so we were taken off the Threatened list.

Also to be fair, I certainly don’t think the City was deliberately trying to cover anything up; they were working off the same report we were all looking at last week.

The point is that in the subsequent decade-plus between 2006 and today, there is little question that enough new threats have emerged to at least potentially threaten the District status all over again.

As stated in the report, the threats this time are systemic and pervasive.

While the report is not quite the coming of the zombie apocalypse, it does give us some red flags to keep an eye on.

The report was unveiled at a meeting at the new Kehoe Iron Works Project in Trustees Garden, featuring Daniel Carey, executive director of the Historic Savannah Foundation; Rebecca Fenwick, Director of Preservation for Lominack Kolman Smith Architects and a local partner in the assessment; and Ellen Harris, Director of Preservation with the Chatham-Savannah Metropolitan Planning Commission.

Perhaps fittingly, out the window I could see the huge Homewood Suites dominating the East River Street skyline, with its ridiculous Eye of Sauron tower (which has been compared to other, less printable things of a phallic nature) and its fake tiki hut rooftop pool bar.

While just a hair outside the actual NPS Landmark District, that Homewood Suites is in some minds the local poster child for garish, oversized new hotel development.

(For an interesting counterpoint on the subject of height, read Jason Combs’ Urbanist View column this week.)

The challenge to maintain Savannah’s historic character is constant and ongoing. The building of the Civic Center in the late ‘60s and the destruction of a section of River Street for the Hyatt in the late ‘70s provoked similar outrage.

Being off the Satisfactory list is actually nothing new for Savannah’s Landmark District. Between 1988-1992, it was on the ‘Watch’ list. In 1995, it was back to Threatened through 1997. After a five year hiatus, it returned to Threatened in 2002.

But the sheer volume of new development in the wake of the economic recovery is now at an unprecedented scale, with unprecedented challenges to match.

As Harris said, “Last year the [MPC] Board and staff reviewed 372 Certificates of Appropriateness — that’s more than double what it was ten years ago.”

Saying that while current change is “inevitable,” Harris concluded, “how we manage this change is the crucial question that decisionmakers must address... the Landmark designation is fragile, and it does need to be protected.”

“We all agree on the importance of balance and maintaining the integrity and authenticity of Savannah’s Historic Landmark District,” Marinelli says.

“However, it seems that there is a huge disconnect when so much of the chatter calls into question a nearly $3 billion industry which drives so much of the economic prosperity in our community.”

Marinelli points to examples of more well-received development, “including the Brice Hotel, the Mansion on Forsyth Park and the upcoming total transformation of the power plant on River Street. Ultimately, we are all in this together,” he says.

Indeed we are, for better or worse.

What does the future hold? The report doesn’t recommend decreasing our Landmark District’s size, as had to be done to the Beale Street District in Memphis, TN.

For the City’s part, they say the brand-new Planning and Urban Design Department is ready to assist with developing a long overdue archaeology ordinance and a “historic pavement” ordinance.

Add to that the anticipated passage soon of the new Historic Preservation ordinance, the Downtown Savannah 2033 Master Plan to be considered later this spring, and the already-passed Hotel Overlay District and Tourism Management Plan, and hopefully the current controversy will be rendered moot.

If not, we can’t say we weren’t warned. Again. 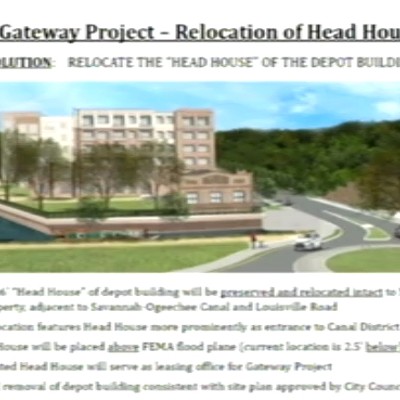