A conversation with comedian Catherine Maloney 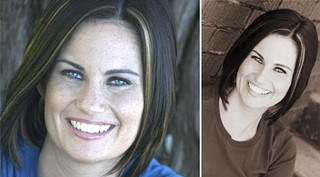 Proof that standup comedy is alive and well in Savannah: On the first Friday of every month, Bay Street Theatre (at Club One) brings in a couple of touring acts, with support sets from local comics. The whole shebang is known as the Savannah Comedy Revue.

Onstage for July – on the 2nd – are Catherine Maloney and Tony Gaud, two Florida–based club comics with bringing–the–house–down reputations. Together they operate a comedy booking company, DitchDog Entertainment.

Born in New York, Maloney lives in New Port Richey, just about an hour northwest of Tampa. She has an acerbic sense of humor (be sure to ask her about skanky babies) and an easy way with irony – she’s like that really funny person in the office, the one you look forward to running into every morning at the coffee machine.

Just two years ago, in fact, Maloney actually bid farewell to the corporate world and got onstage for the very first time, armed only with steely resolve – and the desire to make people – lots of people – laugh.

I was thinking about the psychology of standup, if that’s not an oxymoron. When you go out there, do you have to swallow hard and say “I’m taking this audience into my confidence”?

Catherine Maloney: I’ve always liked public speaking. My degree is in communications. So getting in front of a bunch of people doesn’t really bother me. But you’ve got to have some moxie to get up in front of a group of people and say “Hey, I’m funny.” That takes a whole new type of person.

Once I started doing it a couple years ago, I just never could look back. I could never stop doing it. It’s almost like an addiction.

But how do you summon it from inside to put yourself out there like that?

Catherine Maloney: Someone once said to me: When you hit the stage, you have to have the excitement of “I have to tell them this.” You know when you get really excited about telling someone good news? Or something funny that happened? That’s almost the adrenalin rush that you have to have right before you hit the stage. Like “They have to hear this.” And that propels you through your set, and gets you going.

On the other hand, how quickly does a comic know when she’s bombing?

Catherine Maloney: You kinda know. My material is a bit abrasive, so if I’m in front of the wrong demographic I try not to make too many adjustments. ‘Cause I’m an artist and I try to stay true to what I want to accomplish onstage. In the long haul.

But at the same time, once you realize “OK, this audience is not typically my audience,” you need to almost recharge your batteries onstage. You need to adjust your energy; you can’t allow the audience to dictate what your energy’s gonna be like. A lot of comics starting out do that; you can see the energy drain from the comic’s body and they almost go in to autopilot and go through their set in a monotone.

What is your demographic, as you see it?

Catherine Maloney: I’d say it’s anywhere from 18–year–olds to early 50–somethings. It’s people that just enjoy laughing at absurd things that happen in everyday life. Because that’s all I do, I just give everyone my perspective on how I see things. It’s a little bit off–color at times. I don’t use a lot of profanity or anything like that.

It’s my perspective. Like I don’t think Oprah is God. I’m a 30–something woman, and we’re told that we’re supposed to attend her service at 4 o’clock every day. And I don’t attend it. It might be blasphemy to somebody else when I say that.

Were you a funny kid? And how did this happen for you?

Catherine Maloney: I think I was a funny kid, because my family’s really funny. I was raised on George Carlin, at a very young age. I saw Raw and Delirious when they came out; I was only like 6 or 7.

How I got started: I was being groomed to the GM for this company, and so I was able to speaking candidly in meetings about my frustrations. And I would just go off on rants. And the owner thought it was the funniest thing he ever heard. And I wasn’t trying to be funny.

I tell people who are just starting out, you should be writing constantly, and you should try to hit the stage as many times as you possibly can. Like all the time.

This is what I wanted to be when I grew up. I just didn’t realize it until a few years ago.

Why is your show called The American Dream Revised?

Catherine Maloney: The two of us realized, a few years ago, that our life is not what we thought it was gonna be. At all. And instead of being disgruntled, we’ve decided to just vent and rant onstage. I do a little bit more than he does. I think it’s time for people to realize that not everybody’s gonna end up in the colonial house with the white picket fence, with the two kids and the dog. We’re not in the ‘50s.

The American Dream Revised: A 2–Act Stand Up Comedy

Where: Bay Street Theatre at Club One, 1 Jerfferson St.