LAZER/WULF may have been born in Athens, GA six years ago, but 2014 has been their banner year. The experimental metal trio caught the ears of Retro Futurist Records (Kylesa's boutique label), and, in July, released their first LP to critical acclaim. The Beast of Left and Right—a hard-to-pin-down but immensely accessible record—is a cauldron of influence and genre, with prog-rock elements, a touch of sludge, thrash, and mind-bending angularity. Really, it just rips. 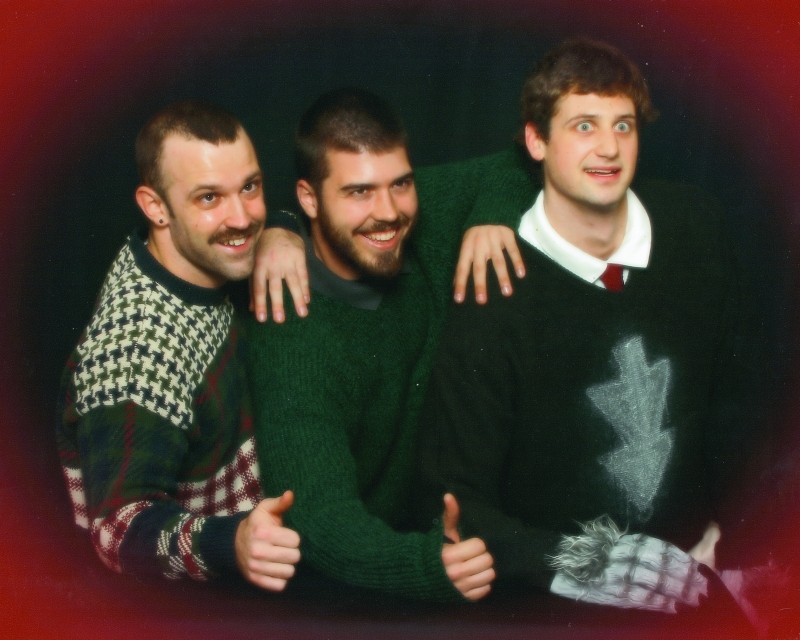 Did we mention it’s a palindromic record? The band reversed and synched up each intricate riff, lyric, and hook so that the album mirrors itself. Yup.

Guitarist Bryan Aiken filled us in on putting out a record they thought no one would hear, living for weeks without barbecue, and the signs of a good show (Hint: it involves getting beer on you).

This has been a huge year for y’all! How have things changed with the new record’s release?

Bryan: Oh man, it's been a whirlwind! We wrote this album thinking no one would ever hear it but our friends in Georgia; we didn't have any kind of future in mind. We just made it for own demons, y'know? Then when Kylesa found us out of nowhere, they insisted we're on to something special. They've been pushing us to meet the potential they see in us, and backed us with their independent label, Retro Futurist. We've been touring like crazy; we've even been lucky enough to go to Europe. This has always been my dream, as long as I've had dreams, but I never thought I'd actually live it. We're just so, so lucky.

Bryan: They're so damn supportive, and they've made it clear that we're at our best when we're honest with ourselves. It's the best possible atmosphere for an upstart band. We're still trying to define our sound, and they've given us their full confidence that our instincts are rad. It's so freeing, having people you respect so profoundly, that have done and seen so much, tell you, "You don't suck. Now go get 'em, tiger!" We're having a fucking blast.

How was touring Europe with Kylesa this summer? This was your first time overseas as a band, right?

Bryan: That was especially a fucking blast! I live between meals, and the food there is mind-blowing. No barbecue, I guess, but it turns out there are other kinds of food. I had no idea. And the people there love music so hard, and with so much energy. We played a show in Spain at 2:00 in the afternoon in the middle of a fucking park – like, trees and swings and shit – and two hundred metal heads came out of nowhere, already day-drunk and raising hell. Every show was such a rager, because they don't know how to not have fun. Even for a band like us that they'd never heard of, they still threw down; it was amazing.

Tell us about the conceptualization of The Beast of Left and Right. A palindrome album is quite the undertaking.

Bryan: (Laughs) Like I said, we never thought anyone would hear this, so we were just having fun. The whole album is about choice and correcting past mistakes, and without the luxury of lyrics, we decided to build that idea into the structure. So one side of the album is about what went wrong, and the other side is a response to that, a correction of those mistakes. Like a do-over. So we looked at certain songs backwards especially, or wrote the notation for one song and re-learned it upside down for the other half. It was so much fun.

But none of that is supposed to be on your mind when you listen to it. All we care about is writing good songs and cool dynamics; that’s the real concept. That mirroring idea was our inspiration, because without inspiration it’s just meaningless. But in the end, it’s a rock album about death, same as every rock album.

This was your first LP—what was it like writing for a full length? Do you approach it differently?

Bryan: Oh yeah, it's a lot to ask of a person to pay attention for 50 minutes, especially with the Internet being what it is. Music lovers are bombarded by so much, so if you're going to stand out, you have to keep it vital and know what you're trying to say. You can't waste a second, or they'll flush you for the next thing on their list. So we tried to bring in as many influences as we could, to make sure every song was totally different and exciting as you move through the album, but still cohesive and satisfying as a whole. We're long-winded dudes anyway, so LPs are much easier than finding brevity for a shorter piece.

You guys have been at it for a few years now; I remember seeing you play at little venues like Tantra Lounge back in the day. What keeps you coming back to Savannah?

Bryan: We're from Georgia, so we've got so many friends there, it's always a homecoming. Just like what I was saying about Europe, Savannah is a constant party. It's why any band gets into thrash, because they want to have fun. There are lots of places where a crowd, even one that absolutely loves you, will barely react. But Savannah is a passionate place, and if you're doing it right, you're gonna get beer on you. That's what this is about, really. We're just trying to get beer on us.

Bryan: Yeah, we're heading overseas again for Roadburn Festival in the Netherlands early next year, which is an honor beyond words. We'll try to hop on a North American tour before that, so we can keep traveling and spreading the word. Build a family, make new friends, get different kinds of beer on us. We're always working on music, that's a habit. Unwritten songs keep me up at night. But right now it's go time. As in, let's go fucking tour and eat weird food.