To register your vehicle for the parade and learn more about the League, visit lwvcga.org.

THIS Saturday, celebrate an important anniversary with a festive car parade.

This year marks the 100th anniversary of the ratification of the 19th Amendment, which gave women the right to vote. In commemoration, the League of Women Voters of Coastal Georgia will host a centennial parade on Sat., Aug. 22.

The cars will start at St. Matthew’s Episcopal Church just before 10 a.m. and will pass Forsyth Park, go through Starland, and finish at Daffin Park. The route was chosen to maximize visibility; on a Saturday, there are already plenty of people along the parade route.

All sitting city politicians have been invited to the parade—but not candidates, as the League is a nonpartisan organization—and Mayor Van Johnson will serve as the grand marshal.

The parade is also open to anyone who’d like to participate, and vehicle registration is still open. 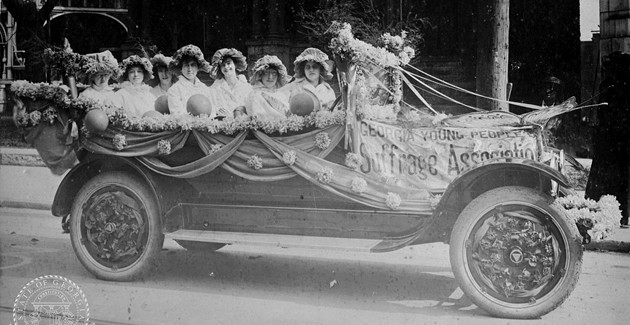 Archival photo, courtesy of the League of Women Voters of Coastal Georgia.

The parade was originally planned around the February vote to pass the 19th Amendment, says LWVCGA President Rebecca Rolfes, but after a few scheduling conflicts and then a global pandemic, the parade was moved to August, which coincides with the ratification date on Aug. 18.

Rolfes says the League had been hesitant to host an event in summer because of the heat, but they were collectively inspired by the graduations via vehicle and car parades that began in the spring.

The parade is a fun, safe way to celebrate a good cause and to reflect on this momentous anniversary.

“I’ve obviously been thinking about this a lot lately,” says Rolfes. “The suffragists worked for 75 years to get the right to vote. No one in power—all of whom were men—wanted it to happen. How did they get that done?”

Rolfes points out that many of the suffragists, including the prominent Susan B. Anthony, died before the amendment was ratified. They weren’t able to see the fruits of their years-long labor.

“But that singleness of purpose that kept their eyes on the prize and said, ‘This is right, this should happen, we will make this happen,’ eventually triumphed,” says Rolfes. “They fought to win this right, but it could be gone tomorrow. It could be taken away from you. This is not a fight that ends.”

Even though it’s been a hundred years, now is not the time to be complacent and take the 19th Amendment, or any of our rights, for granted.

As we prepare for an election season whose integrity and security has already been called into question, it’s important to honor the spirit of the suffragists and fight for our rights.

The League regularly does that work, and they’re ratcheting up their efforts ahead of the election season.

“We have a huge get out the vote effort that has a lot of different moving parts,” says Rolfes.

Part of that effort includes going to precincts with the lowest turnout and distributing information on voting via door hangers. They’ll also send postcards reminding people to vote, putting up yard signs and posters, and assisting people with physical disabilities in their voting efforts.

The League is also working on obtaining more drop boxes for absentee ballots, since Chatham County only has one.

“We have over 200,000 registered voters, and one drop box,” says Rolfes. “But, we are very sensitive to the fact that if there’s money to be spent on election infrastructure, it’s going to go to more scanners and more technicians and more poll workers. We’re trying to work with the Board of Registrars to make sure that it gets done, but that it’s done absolutely legally.”

Rolfes urges that the League could use some volunteers to accomplish this mission, particularly with going door-to-door. If interested, send an email to lwvcga@gmail.com to volunteer.

“We have to remain vigilant and do everything we can to ensure that the right remains in place and that everyone who has the right to vote gets to vote,” says Rolfes.