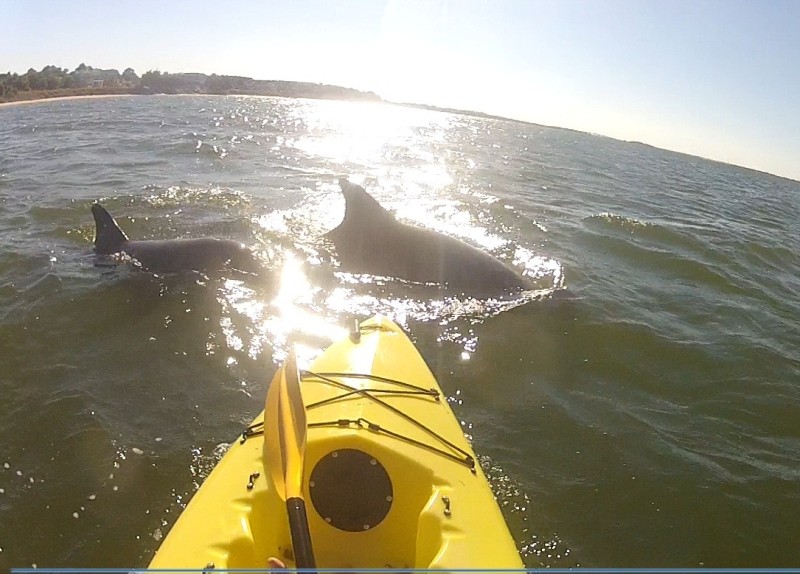 Muriel Lindsay photographs a pod of dolphins across the bow of her kayak 'Buttercup' at the mouth of the Savannah River.

Muriel, who has traveled the world for years gleaning the wisdom of the ages, now serves as a amanuensis for dolphin friends, with whom she has spent hundreds of hours while kayaking in the waters surrounding her island home.

Her wanderlust may have been inherited from her father, Robert Opie Lindsay, one of a handful of American pilots designated as an “ace” in WWI. Still in his early 20s, Lt. Lindsay earned the Distinguished Flying Cross for downing six German planes while flying his Spad fighter over Germany and France.  He likely shot down many more, but in those days pilots only got credit for the ones fellow pilots witnessed.

He was later promoted to the rank of colonel, served as commanding officer at Ft. Sill, OK, and was in his late 40s when Muriel was born.

She took off on her own world adventures after her father’s death. 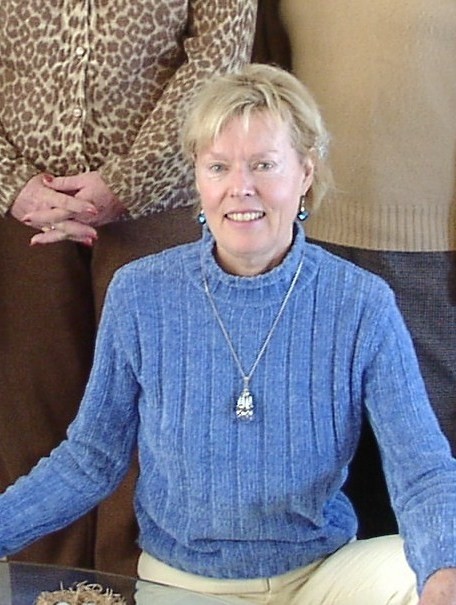 Muriel claims her new book, The Dolphin Letters: Vital Information from Sea to Land (now available through Amazon), is the result of her taking dictation as a kind of secretary to her waterborne buddies while doing what she calls “participatory research” cruising among them in “Buttercup,” her tiny kayak.

Her book includes 33 “letters” containing information she says dolphins want her to pass along to humans because they care about us and want to help us make a transition to the far better life awaiting us.

Their letters are filled with information about how to improve our present and future lives, stressing repeatedly that we are right on the cusp of momentous, world altering change.

While this transition is inexorable, they say they’re trying to help us achieve it sooner than later and because this is such a critical time they have chosen this moment to “speak out” to us through her, according to Muriel.

You might be mistaken if you take her claims regarding the validity of such communications too lightly.

Others, including internationally respected philosophers and scientists, have suggested similar possibilities, though none claim to have taken dictation directly from dolphins.

Dr. John Cunningham Lilly, a physician, scientist and psychoanalyst who studied dolphins for more than 40 years, delved deeply into interspecies communications while working for the federal government and several prestigious universities.

He established the Communication Research Institute to study vocalizations of bottlenose dolphins and his work helped create a global awareness of dolphins and whales that led to the enactment of the Marine Mammal Protection Act in 1972.

Dr. Lilly, who died in 2001 at the age of 86, also established the Human Dolphin Foundation and designed a floating “living room” to serve as a communications laboratory where dolphins and humans could communicate directly.

He was so convinced of the moral superiority of dolphins that he considered them akin to ethereal beings and suggested that they receive not only protection by but representation in the United Nations.

Another authority in the field, philosopher Thomas J. White,  in his book In Defense of Dolphins: The New Moral Frontier, believes dolphins are extraordinarily intelligent, referring to them as “non-human persons: different enough from humans that it’s fair to regard them as something like extraterrestrial intelligences, but no less imbued with dignity or worthy of respect than ourselves.”

Because of their intelligence, self-awareness and complex behavior, White has joined other ethicists in supporting legislation giving dolphins, whales and porpoises protection through a legally enforceable “right to life.”

Caspar Henderson—a journalist, author and acknowledged authority on animals, insects and other non-human life with extraordinary abilities—also suggests that dolphins can communicate with us.

In The Book of Barely Imagined Beings, a 21st Century Bestiary, Henderson says dolphins have been cooperating with humans for eons, and it was they that taught Neanderthal man how to fish.

Henderson says it has long been established that dolphins can distinguish textures and shapes at far greater distances than humans; have the ability to see through our skin to “view” a beating heart, and have determined pregnancy in women before they were aware of their condition.

Dolphins have learned human signals enabling them to construct 2,000 sentences they understand, according to Henderson.

On the subject of dolphin conversations, popular scientist/astronomer Carl Sagan once said:

Given Muriel’s revelations in her current book, this may no longer be the case.

She says she and the dolphins understand and communicate through vocal sounds, body gestures and eye contact.

While floating not long ago in Buttercup, she says she experienced a kind of epiphany, becoming mesmerized while witnessing an unusual, lingering light on the water.

That’s when she was suddenly surrounded by a large pod of dolphins. She felt destined to do something for or with them, and found herself urging them to “Help me to help you!”

“We will,” they responded. Muriel then dedicated herself to taking the information they gave her and recording it in the form of dolphin letters to humans.

Among other things, according to Muriel, their letters tell humans:

Dolphins admire our dedication, hard work and marvelous inventions but we fail to see our true relationship with nature; have failed to develop a proper balance with our emotions and the environment, and mistakenly try to “control” situations and events.

Having considerably more experience in their 30 million years on the planet than humans, dolphins have honed their ability to maintain a balance between themselves, nature and all other elements.

After trying life on land, they decided to make their home in the water, where all living things originated. This environment eliminates the pressure gravity places on land-bound creatures and enhances their ability to “go with the flow” and live in the present.

A dolphin’s life and environment require no exhaustive work building things or producing food. This allows them to develop their capacity to understand the universe while also affording more time for play and indulging in sex for both pleasure and propagation.

Being non-judgmental, they harbor no ill will towards humans who mistreat, enslave or murder them (like the Japanese who round up hundreds each year to kill and eat). Dolphins figure this is just the way things are meant to be.

Because their actions and thoughts are transparent, they can see one another’s true nature and emotions as they occur, hiding nothing.

Keeping secrets through fear of vulnerability, suffering or causing pain, is a major problem for humans, impeding our advance toward life beyond fear, which will be limitless in its creative potential.

Another problem for us is that we waste our time dwelling on the past and worrying about the future, diminishing our ability to live in and savor the joys of the present.

There is no need to accumulate knowledge. Life just happens and we should accept it because each moment holds all that is needed.

Our balance and evolution is circumscribed when we concentrate on our individual rights, needs and desires rather than the good of the whole. While dolphins maintain their individuality, their first concern is the welfare of their group and to survive in the future we must join them in moving toward a global village.

Dolphins have no notion of “good” or “bad”, while humans waste too much time feeling guilty or in self-loathing because of past errors. This is counterproductive, changing nothing and hampering our evolution. We need to deal with life as it is, not as it should be.

One of the most important things humans can do, both as parents and groups, is to give love and protection to our babies.

Newborns are our hope for a better future and despite the chaos in the world, they want to be born, and we are doing them a favor with child birth. Showering them with unconditional love and support will enable them to fulfill their destiny.

We should also know that some babies—including human, dolphin and whale—are actually “from the future” and may help lead us to it.

Death is not to be feared. While some are terrified by the thought of dying, when that moment occurs, we, like all animals, will relax and let it unfold as simply a part of life. Everything that is experienced, including death, is a part of all that will ever be. Though they have needs of their own, our bodies are just containers temporarily holding our spirits and souls.

All lives are based on a soul’s intent to be here for a specific purpose. Dolphins and humans are eternal beings in our sphere called earth.

In order to evolve, humans need to trust in their hearts, have the courage to discard our old ways of thinking and believe they can do whatever they think they can. When enough people change to create a critical mass, there “will be an explosion of creativity like nothing the world has ever seen.”

Intelligence is not a measure of true worth. It is the heart that fills true needs and the mind is in the service of the heart. We are moving from a thought-based to a feeling-based model and will achieve real freedom when the mind follows rather than leading.

Thinking with the heart is the only way to proceed since feelings are more than emotions. They are vast realms of awareness and sensitivities.

What was once a clear recognition of the continuity of all life has been lost for most humans except when molecules from creation’s “big bang” reach us as feelings which we cannot name. That’s when we remember and connect with our initial primordial soup knowing we are part of everything and everything is part of us.

Self love is actually altruism and provides the only way we can take advantage of the opportunities now offered to learn who we really are and why we are here.

Dolphins have seen the near total destruction of life on earth during their  millions of years here but the earth always recovered. Despite the pollution, radiation, hunger, greed and overpopulation which exacerbate our current problems the planet can still be salvaged. To save it, collaboration between the realms of land and the sea is more important now than ever.

Dolphins visit us when our brain waves change while we are asleep, opening doors of perception and portals through which they can pass. In this way, even to those far from the sea, they offer us directions and let us know how they feel about us.

Despite their disbelief, humans are worthy of a joy-filled life and even the most cynical among us will eventually reach the next level in our evolutionary spiral.

The good news is that when we reach this level it will be far better and exponentially more joyous than we could ever have imagined.

Muriel says she’s not concerned about whether you believe how she claims to have obtained the information in her book but you will find this information vital.