WHEN Patrick McHenry, professor at Columbus State University and member of the advocacy group Bicycle Columbus, told a colleague he was attending the Fifth Annual Georgia Bike Summit held in that city Oct. 24-26, he got an earnest question:

“So what do bicyclists talk about when they get together, how to change a tire?”

The topic of flats undoubtedly came up over the weekend in casual conversations, but the conference examined much larger and more complex issues. 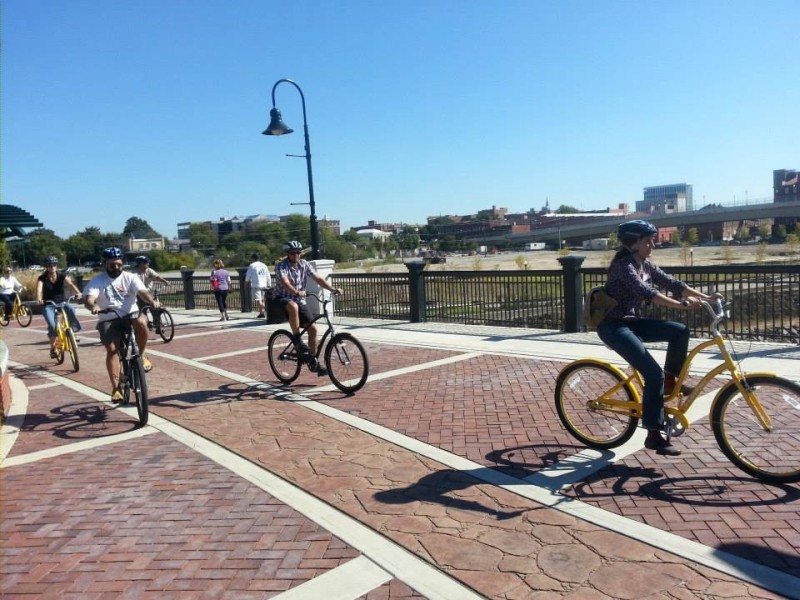 The Frank K. Martin Bridge spans the Chattahoochee River and links Columbus, Ga. to Phenix City, Ala. The bridge that formerly carried cars is now used by people who walk and bicycle. Photo courtesy Georgia Bikes

Columbus Mayor Teresa Tomlinson and Roger Millar, vice president and director of the Leadership Institute at Smart Growth America, a national coalition of organizations that work to make communities more livable, were the summit’s featured speakers and they echoed the theme.

Tomlinson has declared her intention to make Columbus the state’s first silver level Bicycle Friendly Community. Every other city in Georgia — including Savannah — that has earned this designation from the League of American Bicyclists to date is classified as bronze.

“We’re making the changes and adjustments we need to so that people in this community can safely bike to work, bike to school, bike to parks. We want to give people alternatives to just automotive transportation,” Tomlinson told WRBL-TV, Columbus’ CBS affiliate, in an interview.

Columbus has been remarkably successful in creating appealing and useful bicycle and pedestrian spaces. Imagine a walking and biking path leading from the Armstrong State University campus to River Street; that’s pretty much what Columbus has in the Fall Line Trace trail, which connects Columbus State with its downtown, counter intuitively known as “Uptown.”

Comparing riverfront amenities, if you walk from one end of River Street to the other you’ll put about a mile on your pedometer. By contrast, Columbus’ Chattahoochee River Walk stretches 22 miles from Lake Oliver to Fort Benning.

The River Walk is an example of turning a problem into a source of pride. The project had its genesis in a response to federally mandated water system improvements.

Last year Columbus officials held a ribbon cutting to open the Frank K. Martin Pedestrian Bridge, which connects Columbus and Phenix City, Ala. Today bicyclists and pedestrians happily and safely share the bridge and the beautiful views of the Chattahoochee River, thanks to the $6.2 million project that transformed a bridge for cars into a bridge for people.

Riding across on my bike, I couldn’t help but ponder the desirability of a similar bridge across the Savannah River. However, such a structure would be much more expensive and difficult here. Kayaks, not container ships, ply the Chattahoochee.

Still, while Columbus has invested millions in expanding its bicycle infrastructure network, we have managed only to paint some stripes on streets in Savannah.

Columbus’ growing catalog of assets makes our inability to construct the Truman Linear Park Trail, nearly a decade after $1,008,000 of federal funding was allocated to the project, even more embarrassing.

I’m happy to report, however, that Savannah is beating the pants off Columbus when it comes to bicycle parking. The Uptown entertainment and restaurant district has a glaring bike rack deficiency, which was surely noted by Dominic Ross, an analyst with Savannah’s Mobility and Parking Services Dept. who attended the conference.

In her address, Tomlinson said investing in bicycling isn’t just about bicycling, but promoting economic growth, improving health and attracting well-educated young professionals to Columbus (and keeping those who already live there), while audience members nodded vigorously in agreement.

After she completed her remarks, conference organizer Brent Buice said out loud what he suspected every bicycle advocate in the room was thinking: How can we get her to move to our town and be our mayor?

The place erupted in applause.