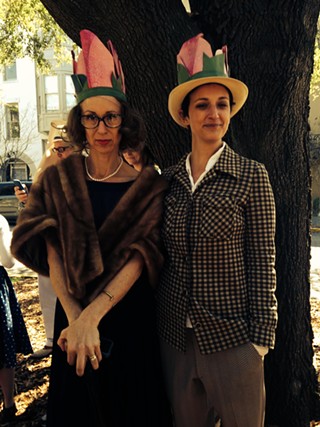 IF YOU weren’t born in the South, or you were but you’ve got dark secrets, or maybe you’re just a general run-of-the-mill weirdo, there is temptation, I think, to believe that you don’t belong.

The key to happiness, then, is to be OK with that. In fact, when a bunch of us non-belongers get together and beat a drum—or many drums—it’s something to celebrate.

The freak flags were flyin’ high at the Flannery O’Connor Homemade Parade and Block Party last Sunday, transforming normally bucolic Lafayette Square into a haven for Savannah’s most delightful misfits and fruitcakes. (I say that out of utmost respect, and humbly offer that it takes one to know one.)

Honoring what would have been the 89th birthday of our own native literary icon and her legacy of gothic, spiritual, disturbing, quintessentially Southern stories, this was an inside joke for the literate outliers: Here was the requisite guy in the gorilla suit, and another in seersucker carrying a prosthetic leg over his shoulder. Chicken costumes and peacock flourishes abounded.

Obviously, no gathering of local eccentrics would be complete without Tom Kohler and his amazing beard. Same goes for beautifully bizarre grande dames Carmela Aliffi and Jane Fishman, the latter resplendent in a vintage fuschia jumpsuit she’s schlepped around since the ‘70s.

“Check this out,” crowed Jane, flashing a wad of cash she’d raised for the Flannery O’Connor Childhood Home from the Chickenshit Bingo booth. (Turns out, chickenshit has another use besides fertilizing the garden. Which reminds me, Jane’s semi-annual Plant Swap is this Saturday, April 5 at her Boundary St. plot.)

Freakdom is a family-friendly affair, and the next generation of odd ducks got plenty of play: Scott “Panhandle Slim” and Tracy Stanton watched their boys hula-hoop for hours, and Dare Dukes did his best to divert his littlest from poking fingers into the bingo chicken’s cage. Vendors Vinson and Jillian Knight-Miner sold massive shark teeth and hand-crafted leather journals while chasing their 5-year-old daughter, Kegan, through the dappled sunlight. Much to the squee of all ages, Rich Copeland brought bunnies to pet (good thing this wasn’t a Steinbeck convention.)

Perhaps it’s O’Connor’s bemused narrative tone or her gimlet eye for hypocrisy, but her stories have come to represent a sense of seditious “otherness,” offering salvation to anyone who’s ever questioned the status quo.

“She was an insider and an outsider at the same time,” considered azalea-wreathed Allison Hersh, a writer and longtime board member of the Flannery O’Connor Childhood Home.

“And she brought that together in a distinctively southern way.”

For sure, the square seemed presided over by a prism of cheerful absurdity, like a giant, rainbow-shaped, wryly-arched eyebrow. But like O’Connor’s discomforting stories, there was a sense of depth in the revelry, as identifying as a weirdo precludes the knowledge that life can be as difficult and stupendously unfair as it is mysteriously glorious.

Tales like A Temple of the Holy Ghost remind us that the sacred and profane exist together at all times, a bittersweet balm against the small-mindedness and violence.

Thus even the most heretical among us bowed their heads as Rev. Michael J. Chaney invoked the novel Wise Blood in his opening proceedings, bemoaning “where’s all my sweetness gone?”

The funereal giddiness was only amplified by Zach Powers’ solemn saxophone, followed by Anna Chandler crooning Nina Simone’s “Sunday in Savannah” with such soulful abandon it’s a wonder the live oaks themselves didn’t start singing along.

There was clapping all around as the unapologetic procession began, led by snare drum maestro Andrew Hartzell and the Sweet Thunder Strolling Band that included mandolin wunderkind Jameson Murphy, Jon Waits, Philip Seymour Price, Joel Varland, Andy Young and some others whose names I didn’t catch because I was holding my crown on tight and running to keep up.

I held my sweetie’s hand as we meandered past The Cathedral of St. John the Baptist, singing terrible but heartfelt harmonies on “I’ll Fly Away,” grateful for the camaraderie.

Our kids conceded to donning peacock feathers for the occasion but hid behind a tree when it was time for the parade itself. No matter; they’re not fooling anyone—they wear their weirdness like a birthmark.

I don’t presume to know how Flannery O’Connor would feel if she knew she’d become the patron saint of Savannah’s freaks and weirdos.

As we scraped the birthday cake sheet clean, I’d like to think she would have approved of any effort to make something beautiful out of the confusion and ugliness of the world and love it anyway.

And maybe she’d also agree to this, merry misfits: You belong because you say you do.