When thinking of your favorite regional seafood, surely shrimp and crab make the list. What about jellyfish?

“Usually, when you ask people if they eat jellyfish, they look at you like a deer in headlights,” laughs Bryan Fluech, associate director of marine extension at the UGA Marine Extension and Georgia Sea Grant.

Don’t cock your head just yet—cannonball jellyfish, also known as jellyballs, are in high demand in Asian cuisine, and they’re found along our coastline in droves.

“We started out with the traditional, more apparent ones like shrimp and crab, shellfish and finfish, but jellyfish is one of our unique fisheries,” says Fluech. 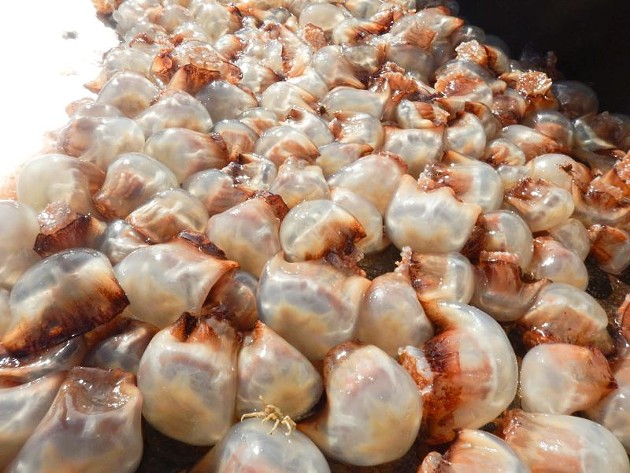 The history of jellyball fisheries in the United States goes back to the early 90s in the Gulf of Mexico. Georgia began harvesting the jellyballs in the late 90s, and in 2013, jellyfish became a legislatively regulated fishery.

The Georgia Department of Natural Resources (DNR) reports that jellyfish are the largest commercial seafood commodity by landings in the state. There’s only one processor in the country, so the actual number of jellyballs exported each year is kept confidential, but there have been estimates of 15 million pounds in one year, which makes it a major asset to our coastal ecosystem.

“It’s not a high-value fishery like shrimp is, but it still employs people, it still contributes to our industry,” says Fluech. “With the university, we’re trying to find alternative methods to help sustain their industry.”

Like shrimp, jellyfish are harvested by trawling, though Fluech notes that the harvesters switch out their nets for a bigger mesh size and trawl for less time.

“I know when we’ve been out, I don’t think we trawled for more than ten minutes at a time, and we can have close to 10,000 pounds of jellyfish in one net,” he explains. “When they bloom, they can be in large groups.”

After jellyballs are harvested, most of them are processed and exported to China and Korea, with some going straight to Asian markets within the country. 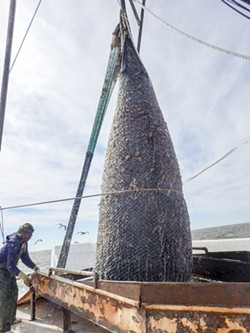 The jellyball fishery is one of the most lucrative in Georgia. UGA Marine Extension and Georgia Sea Grant.

“When it’s exported through the port of Savannah, it’s not even ready to eat,” says Fluech. “They basically salt them here and dehydrate them, and once they get overseas they rehydrate them and then they’re used.”

Fluech points out that jellyfish are shipped overseas, processed, and sent right back, so they’re seeking a way to cut out the middleman in a sense.

“There are huge Asian markets in Atlanta and New York,” he says. “Because it’s a U.S. product and it’s managed and there’s a lot of oversight, there is a demand for it.”

Jellyfish are most often cut in strips and served in salads, but they’re also used in stir-fry, sushi and egg rolls. They’re crunchy in texture, can be served cooked or raw and take on the flavor of what they’re served with. Researchers are also looking into alternative purposes for the jellyballs.

“We have a food scientist at UGA that we’re working with, and he’s been developing a gelatin powder from them to use as a food thickening agent in the hopes they can find alternative uses for the jellyfish,” says Fluech.”I know the pharmaceutical industry has been interested in jellyfish for different purposes over the years.”

At Thursday’s workshop, guests will learn more about the biology of the jellyfish and how the fishery operates, as well as watch a cooking demonstration and sample the jellyfish.

“Usually, what we do is hand out recipes and talk about where you can buy Georgia products. It’s not so easy with jellyfish,” says Fluech. “What they harvest here isn’t automatically ready to eat. We had a chef in Brunswick make an heirloom tomato salad with jellyfish, and sushi chefs in Atlanta have used it. There are possibilities, but I don’t necessarily expect anyone to have big slabs of jellyfish on their plate!”

The joy of discovery at the UGA Aquarium