Let's hear it for the boys!

IF A single person were to embody Savannah, what would they be like?

Timelessly attractive? Well-read with a history knowledge so extensive they could win any trivia night? The life of the party with a steamy gaze that could break the heat index? Maybe a little dangerous? An excellent host with a creative spirit? An adventurer at heart with a bit of a charming drawl?

The Savannah Sweet Tease Burlesque Revue is on the hunt for their very first Mr. Savannah, and nine male-identified 912 residents are in the running for the crown. A fundraiser for the Tease tour fund, the Hostess City has never seen a pageant quite like this one.

“We’ve just been trying to come up with fundraisers that are more fun for us and fun for the people donating,” she explains. “So people don’t really feel like they’re just giving their money to somebody—they’re getting something out of it. I had the idea for a Mr. Savannah pageant at The Jinx and wondered, ‘Why has no one ever thought of this?’ I can’t believe it’s never been done!”

The Teases hit the road this summer, and toting a squad of show-folks up and down the East Coast can get costly. All profits from the pageant will go to gassing up the caravan and feeding and housing the troupe on the road.

The group’s always thinking of clever ways to make some extra cash for the adventures—chili cook-offs, kissing booths—but the response for Mr. Savannah has already shown that the community’s ready for a king of its own. And Savannah’s fellas are ready to reign.

“All the entrants pay an entry fee,” Denney explains. “Then people pay to get into the show, and we’ll take all that money and split it in half. Half goes to the Sweet Tease, the other half goes to the winners.”

Mr. Savannah himself is expected to be a well-rounded individual who excels in each category of the competition. 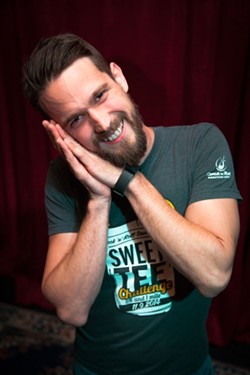 Photo by Jon Waits
Jeffrey Giddens would giddily be your first Mr. Savannah!

The gents will don their summertime finest in the swimsuit/summer wear portion of the pageant. For the interview segment, Teases will ask questions to get to learn more about the hearts and minds of the contestants; for that segment, entrants may wear the outfit of their choice.

Apparel guidelines aren’t strict, and Denney likes it that way.

“The audience is gonna be seeing dudes trounce around in their favorite swimwear,” she smiles. “And who knows what the outfit of choice will be! They could come out in a tux, or a thong!”

“Then there’s a talent portion!” adds Garrett Bunton, a fresh beard, er, face, to the Sweet Tease lineup (Savannah’s seen him strut his stuff as Butt Reynolds with South Florida’s Hurly-Burly Burlesque). With years of experience in manlesque, Bunton is a perfect addition to the panel of judges.

“The talent portion is whatever they want to show off that makes them shine. We’re not requiring them to dance.”

“It isn’t a burlesque show,” Denney chimes in. “It’s dudes doing their thing—whatever they’re comfortable with. The talent ranges from dancing, singing, there’s going to be a guy mixing fancy drinks, he’s a bartender...it’ll be very versatile in that portion.” 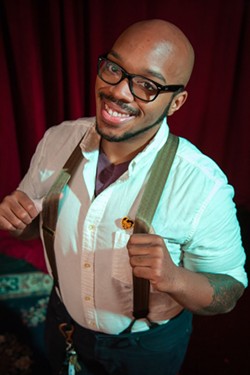 The first place winner will get the largest amount of cash; second place will earn cash as well, with third place fetching season passes to Savannah Sweet Tease shows.

“Each category will have a winner,” Denney elaborates. “Whoever gets the highest score in those categories will win a prize. We’ll also have a Mr. Congeniality, too, that the contestants will vote on.”

In order to best represent their city, Mr. Savannah entrants must have lived in the Savannah metropolitan for at least one year.

“Nobody’s been here for less than two years,” Bunton points out.

According to the judges, Mr. Savannah isn’t about the fit of the Speedo or interview elocution: attitude is the real winner here.

“It’s going to be someone who’s very well-rounded in all three categories,” explains Anita Narcisse (Rita D’LaVayne, who will emcee the evening).

“Mr. Savannah is comfortable in their own skin,” adds Denney.

Photo by Jon Waits
Jack Steelman will steel your heart.

“Part of it is highlighting the diversity of Savannah, too,” says Bunton. “We’re letting them pick their own music and shine. It doesn’t have to be any kind of category; we’re looking at the melting pot of where we live.”

“I think Savannah has so much character,” Denney observes. “In order to be Mr. Savannah, you have to have a lot of that!”