Let’s pedal past the bias against bicyclists

John Bennett is Executive Director of the Savannah Bicycle Campaign. 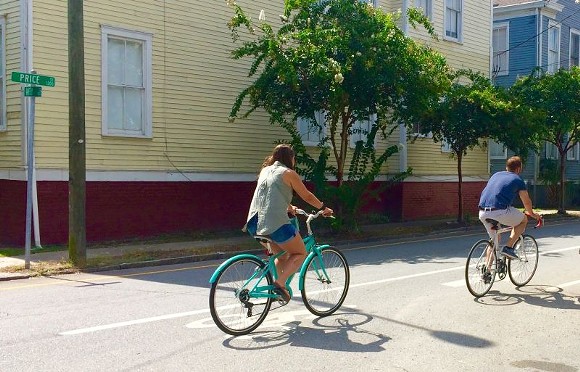 What did drivers get when their ability to travel 20 mph above the speed limit was curtailed by the Price Street bike lane? A safer street.

NO MATTER how many terrible things happen in the world, people still find opportunities to complain about bicycles.

I guess I should take comfort in that, when it seems like the bad news just keeps on coming.

For instance, last week I read a perennial gripe that “the city ruined Price Street” by adding a bike lane and on-street parking in 2012. I lived on the corner of Price and Gaston streets a decade earlier and I don’t have fond memories of what the street was like then: It was like living next to a drag strip. The traffic wasn’t particularly heavy, but it was fast.

This is the predictable result of a street that has excess capacity, or in civilian terms, more lanes than it needs. Wider streets encourage us to speed.

It’s not as easy to go fast on Price Street as it once was. These days, car traffic usually flows at or slightly above the posted speed limit most of the time.

Still, some feel something was taken from them when the street was reduced to one travel lane for cars.

Price Street residents are grateful for the additional parking, I presume, but what about the people who use Price as an escape route from the Historic District? What did they get when their ability to travel 20 mph above the speed limit was curtailed?

I’ll be writing more about this in the future, but my preliminary analysis of data provided by the Traffic Safety Research and Evaluation Group at the University of Georgia’s College of Public Health suggests the street’s redesign has resulted in a 27 percent decrease in motor vehicle crashes.

Similar results have been demonstrated again and again across the country. Making streets safer for people on bikes makes them safer for everyone. As drivers, it turns out, we are often beneficiaries of bicycle infrastructure improvements.

If you’ve read this column over the last five years (Yes, the first News Cycle was published way back in May 2011) you’ll recognize this as a recurring theme. In fact, the headline for the Aug. 16, 2011 column was, “Don’t ride? Cycling is for you!”

In it I wrote, “Even if your feet never, ever touch bicycle pedals, you will benefit from transportation improvements that put more bicyclists on the streets.”

But our streets are in terrible condition, some complain. Shouldn’t we work on fixing the potholes before we start adding extras like bike lanes? The opposite is actually true. We should add more bicycle lanes so we won’t have to fix as many potholes.

The smart folks at Colorado’s Pedal Fort Collins blog recently ran the numbers on how much damage various vehicles inflict on street surfaces. The results are enlightening: “It would take 17,059 trips by bike to equal the damage caused by an average car. It would take 364,520 bike trips to equal the damage caused by just one Hummer H2, they discovered.

What about the tractor trailers that thunder along Bay Street and Martin Luther King Jr. Blvd? It would take 6,995,485 bike trips to equal the damage caused by just one semi-truck.

Cycling not only reduces wear and tear on streets, it decreases wear and tear on us as we age. A study published last week, “Cycling and Diabetes Prevention: Practice-Based Evidence for Public Health Action,” found people who ride bicycles regularly can reduce their risk of Type 2 diabetes by up to 20 percent.

Researchers studied “adults recruited between the ages of 50 and 65” and found “those who reported higher weekly quantities of cycling were less likely to develop diabetes, particularly in respect to cycling to and from work.”

“Perhaps the most interesting and original finding of the study is that those who took up cycling after the study began also had a lower risk of developing diabetes than those who did not,” the authors report. “This suggests that it is not too late to gain the benefits of taking up cycling, even in the years approaching retirement.”

Here again, the benefits of cycling are conveyed to people who don’t ride (and, often, grumble about those who do). A 2014 study calculated the economic burden of diabetes, finding it “exceeded $322 billion in 2012, consisting of $244 billion in excess medical costs and $78 billion in reduced productivity.”

An NPR story on the study, “What Diabetes Costs You, Even If You Don’t Have The Disease,” calculated our individual shares of the $322 billion burden: “$1,000 a year for each American, including those without diabetes.”

When we bellyache about bicycling, we are not complaining about a problem, we’re attacking a solution.