Life, Liberty ships and the pursuit of history

In a city that goes to such length and expense to maintain, celebrate and market its rich history, it comes as a surprise when someone uncovers an event that has gone overlooked for decades.

But in his new book, On the Swing Shift, Savannah-native Tony Cope does just that, re-discovering the World War II era Liberty Ship industry that had been all but lost from the city's collective memory.

"I was a child during the war, living on Gaston Street, and I could see the lights from the shipyard at night from my second story bedroom window," says Cope. "I thought, if I was alive during that time and don't remember any of it, then most people in Savannah probably don't remember that those people worked out there."

The ship building facility, which was located off East President Street and owned by the Southeastern Shipbuilding Corporation, is no small thing to forget either. Although the manufacturing center disappeared shortly after the end of the war, it remains the largest single industry the area has ever seen, employing over 46,000 people during the four years it was in operation.

"I just started thinking about it. You know nobody really remembers that that shipyard was ever really there," says Cope, who used to drive past the former site every day while commuting to work. "There's nothing out there that would tell you anything like that had went on there."

During its existence, the manufacturer produced 88 Liberty Ships, massive 10,000 ton cargo ships used during the second World War to transport supplies to troops across the Atlantic, as well 18 smaller ships, known as the AV-1, which were utilized in the Pacific campaign.

Cope, who played an integral role in establishing the Oatland Island Wildlife Center and served as its director for a time, became enamored with the forgotten Liberty Ship industry while helping to establish another local landmark, the Mighty 8th Air Force Museum.

He had been made chairman of a committee charged with raising local interest in the construction of the Mighty 8th museum, and had put together a presentation of local photographs from the early 1940s, which he showed to civic groups whose support was needed to help advance the project.

While gathering photos, he received a call from a lady named Evelyn Finnegan who told him about a series of photos she had of her mother christening one of the Liberty Ships with a bottle of champagne. Seeing the photos triggered the memory of the plant for Cope, and he began researching beneath one of the few historical stones left unturned in Savannah.

What he discovered was one of the great untold stories of this area, a thread that tied together thousands of people, most of whom had never shared their experiences.

He soon discovered that people he knew, who he'd worked with everyday, or whose kids he taught in high school, had worked at the manufacturing plant, but had never spoken of their past experiences.

His research for the project has been no small endeavor. By the time Cope retired in 1993 and moved to Ireland, where he still resides today, he had done the majority of the interviews necessary for the piece. However, he continued locating people, including merchant seaman and navy security, who had sailed on the ships, and in total completed more than 120 interviews for the project.

The result of his hard work is a detailed account of not just the ship building that went on here, but the journeys of both the ships and their crews, revealing not just a slice of local history, but a complex web of personal stories that carries the reader from the ways where ships launched to various ports of call and the perilous trip across the Atlantic, which at that time was heavily patrolled by hostile German U-Boats.

Although the shipbuilding industry here thrived during wartime, it disappeared almost as suddenly as it arrived, part of the reason it may not have received its proper place on the shelves containing Savannah's better known historical lore.

Having put more than 15 years worth of work into On the Swing Shift, which hit the shelves earlier this month, Cope isn't going to stop and rest on his laurels - he's already trying to find a publisher for his next book, The House on Gaston Street, which documents his childhood.

"It's about what kids did in those days, as opposed to what kids do today. Everything is electronic today, and everything is games and computers. We didn't have any of that," Cope explains. "It's not done to compare the two and make any judgment about which is the better situation, it's just this is what we did."

Cope will make two local appearances in support of On the Swing Shift, including a signing at E. Shaver Booksellers on October 30 from 1:30-3:30 p.m., and a talk at the Ships of the Sea Museum on November 3 at 6 p.m. For more about the book, visit ontheswingshift.wordpress.com. 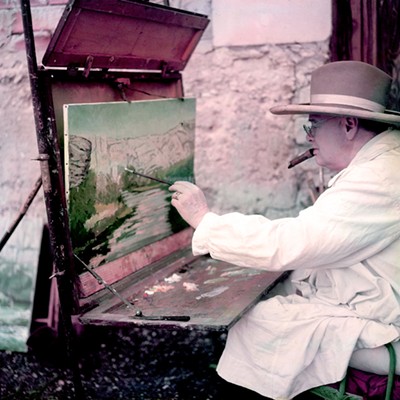