Space is limited to 36 people and reservations are required. Admission to Ossabaw and Pin Point is free, but there is a $30 transportation fee. Visit ossabawisland.net for reservations and more information.

Free and open to the public. Visit internet.savannah.chatham.k12.ga.us/schools/massie for more information.

THIS WEEKEND, a Savannah tradition of sorts continues with Lift Every Voice.

Now in its third year, the initiative started at the Smithsonian Institution’s National Museum of African American History and Culture in 2016 as a way to support African American history and culture. Savannah is one of the only communities that have celebrated every year since.

Begin the weekend with a fee-free boat trip to Ossabaw Island and Pin Point Heritage Museum. Both places are full of rich history.

“After slavery, when people became freed, they were able to buy land and start their own communities,” says Holly Elliott, Director of Marketing and Public Relations at the Coastal Heritage Society.

“At that time, even though we think that waterfront land is really special and such a premium, back in those days, if it wasn’t farming land, people didn’t think of it that way.”

The low importance placed on waterfront land at that time allowed African Americans to purchase the land at an affordable rate and begin their own communities there.

“At the time, it was incredibly isolated, so you could really only access it by footpaths or by boat,” says Elliott. “That’s how this became a Gullah-Geechee community; those traditions over time were passed on, some of the language things were passed down from generation to generation, and they were isolated, so those traditions continued on. Of course, now there’s a bridge, so they’re not completely isolated from everything, but it’s important for them to be able to share this important history.”

Because of that isolation, the traditions of the area have remained rich.

“With a lot of the Pin Point families, people that still live in this community, they were either related to enslaved people or working as freed people on Ossabaw Island,” says Elliott, “so a lot of people who do our guided tours have a strong connection to Ossabaw Island.” 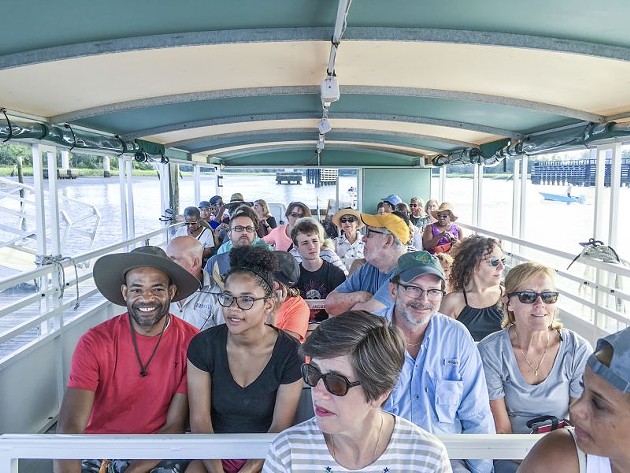 On the boat to Ossabaw Island for Lift Every Voice tour in 2018. Photo by Elizabeth DuBose.

The Coastal Heritage Society has been a participant in the event every year since its inception.

“This is a really great way for us to connect to other African-American cultural sites in Savannah,” says Elliott. “Starting out with Lift Every Voice, we were part of the inaugural year, and it’s really wonderful we’ve been able to continue it on since then.”

The events are centered around “Dave the Potter: Artist, Poet, Slave,” an award-winning book by Laban Carrick Hill. WSAV’s Kim Gusby will read the book and kids will get to make their own clay pots and write pottery.

“Dave the Potter was an enslaved person who was born in South Carolina during the Antebellum period,” explains Steve Smith, curator at Massie Heritage Center. “He lived to see freedom—he died in the 1870s. He made literally thousands of pots, and he would have been obscure, we wouldn’t have known anything about him had it not been for something very important: he was literate.”

“That’s one of our themes we talk about here. Massie was a freedman school after the Civil War, and the Freedman’s Bureau authorized it, and we have an exhibition devoted to the Clandestine School and how enslaved people were not as entitled for how to read and write,” explains Smith. “It’s amazing because he was literate, so he was able to write poetry on his pot sand sign his pots.”

The use of clay in the activities was also a conscious choice on Massie’s part.

“We try and maintain a STEM theme here, and that’s why we incorporated clay into this,” says Smith. “We teach students a lot about the architecture of Savannah and the technologies associated with that, and we also teach them a lot about Savannah Gray brick. That’s an amazing history—those bricks were made by African Americans at the Hermitage plantation, so we do a lot with that. Since clay is so common to our area, and since we’re a port city and we export so much clay, we wanted to focus on clay and how it’s been used by humans throughout time.”

Massie’s participation in Lift Every Voice is a natural fit.

“One of our primary themes of Lift Every Voice is African American history and culture, and we teach a lot of that here,” says Smith. “We focus a lot on civil rights history here, so we thought Lift Every Voice was a good fit for us.” 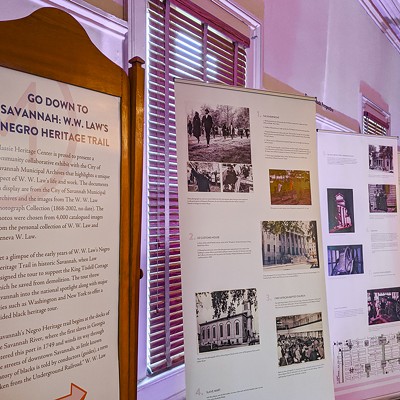