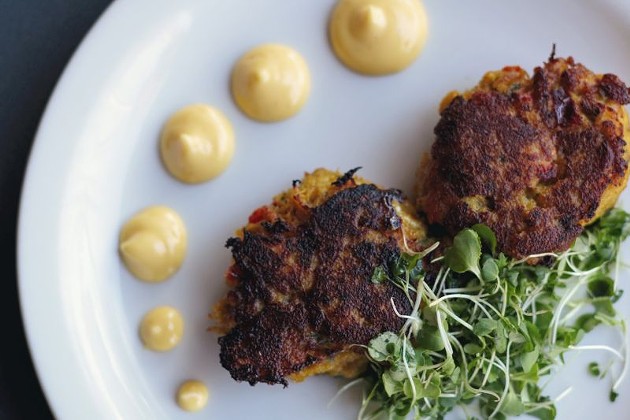 IT’S NOT very often that French, South Asian, and Southern, all of which have very different base flavor profiles, are melded together, and it’s even more rare that it’s done so harmoniously.

However, Chef Mir Ali, the brains behind Lili’s Restaurant and Bar on Wilmington Island, believed that such a combination was possible. Lili’s was brought to Johnny Mercer Boulevard on Wilmington Island in 2014, and, since its inception, Chef Mir has not taken his foot off of the pedal of flavor-forward dining.

According to Chef Mir, the true hero in this story is his wife, Azi, who three years ago “gave me the courage to take the next step.” The restaurant is named after their daughter Lili, who lives in France.

But what makes Lili’s special besides such inspiration? Savannahians are famously difficult to persuade to try new food; it may or may not be the Southern in them. To be fair, it’s hard to beat really good fried chicken with all the fixin’s.

The salad has plump berries, feta, edamame, and a coating of balsamic dressing.

However, Lili’s menu offers something for everyone; those less adventurous can come in for a salad or fried shrimp and leave having experienced something new like tandoori spices or naan bread.

Though some spices and dishes may seem a bit exotic for the meat-and-three eater, Chef’s layers of comfort and warmth through piquancies are familiar to every Southerner’s palate.

Chef Mir shared a good many of his adventurous dishes, and not a single dish disappointed. Let’s start with the salad.

The appearance of the Citrus Berry Salad is awe inspiring. It arrives at your table sprinkled with a rainbow of seasonal berries, edamame, oranges, and feta.In stark contrast, a house-made, deep, dark, and thick reduced balsamic vinegar dressing adornes the side of the plate, adding sweetness as a beautiful foil to the feta.

The salad has everything you could want: plump tangy berries, salty, smooth feta, umami-filled edamame, and a coating of powerful balsamic dressing that finishes with a bit of sweetness to tame it all. Each element works together, but each stands on its own as a delectable accoutrement.

The Crab Cakes are an absolute must and a perfect interlude to marry traditional Southern food with flavors that are a bit more adventurous.  It is at this point that I must confess: I do not like crab cakes, and, in the few short years I have spent on this earth, I have yet to find one that I love. That has changed, and West Indian curry is to thank.

The dish is served as a sandwich at lunch on a brioche bun, and it stands as a perfect appetizer for dinner, both served with a fresh and creamy lemon aioli. The two succulent mounds of flavor are seared on each side giving them a thin but crisp crust.

The addition of curry, red peppers, and onions highlight the buttery crab and shrimp without overpowering their delicate flavor. The center of each cake is not only filled with bits of exquisitely cooked meat but also creamy, contrasting the paste-like texture of some crab cakes.

Chef Mir attributes the addition of eggs, which allows each cake to rise like a souffle, to what I would call the impeccable texture of his crab cakes.

Next were Chef Mir’s lamb chops. The Lamb Chop entree arrives at your table glistening with herbs and garlic, each one sitting atop a heap of wilted spinach. Upon the first bite, your tongue is coated in the luscious flavor of rendered fat, then the full flavor of tender lamb hits your palate.

Like the crab cakes, the chops are seared with love and given a beautiful crust. The lamb is cooked with precision allowing them to be delicate yet juicy in the center.

Chef’s techniques are shown in the impressive “Frenching” of the chops, allowing the diner to pick them up by the bone and eat them with their hands, which is how the dish is intended to be eaten. According to Katherine Alt, lead server, this dish is “Chef’s favorite.”

In addition to bold seasoning and technique, Chef Mir puts sustainability at the top of his list when creating a menu item. Take for example the Seafood Stew, which Katherine told me “showcases [Chef Mir’s] personality” while describing the dish.

Short of the kitchen sink, this fare has everything you could want and more, since one or two types of seafood is apparently not enough for one dish. Shrimp, red crab claws, calamari, and salmon all make an appearance atop a bed of al dente basmati rice, which allows the stew to invade all the nooks and crannies of the rice.

Why red crab in lieu of Savannah’s traditional use of blue crab? Chef Mir explains he uses the Atlantic Red Crab Claws as they “are more sustainable than blue crab...because their claws grow back.”

Coconut milk and cream contribute a sweet and velvety counterpoint to the spicy curry powder and delicate saffron packed into the sauce.  Between the flaky salmon and deep flavored stew, this potion is sure to warm your belly.

Always striving for creativity, Lili’s hosts a unique seated dinner three to four times a year. Most recently the restaurant hosted a “Wild Night in January” with a menu that featured unique proteins with wine pairings.