Listening to the ‘loonies’

IF I TIME IT correctly, I can sit on my front porch in the morning and see Henry riding his bike to work at the coffee shop. Then Robin will pass by on his way to teach his first class of the day at the local art college.

And I see plenty of other people I don’t know on bikes. Like the guy on the electric bike who commutes to a job somewhere to the east, and the woman on the beach cruiser with her lunch in the front basket.

The same thing happens in the early evening when folks return from their day jobs, ride around the neighborhood for exercise, or head to work on the night shift. I see this procession of pedalers every single day from my front steps. 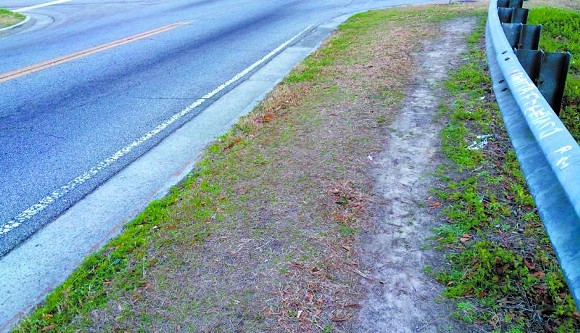 Demand for more sidewalks was clearly expressed at last month’s Savannah Forward meetings. Citizens also vote for sidewalks with their feet every single day, showing us where they are needed like on this stretch of 52nd Street.

You may be wondering why I’m acting like I’m the Georgia Porch Authority. It’s because I keep thinking about a comment posted on the Savannah Bicycle Campaign Facebook page last month, apparently in an attempt to dispute my reporting on the significant demand for sidewalks, bike lanes, and traffic calming expressed at Savannah Forward meetings.

“I see one, maybe two bicycles per week, and only on Saturday mornings. This whole bicycle campaign seems to be a bunch of loonies exaggerating demand when there is none,” he wrote.

To which, someone else replied, “I can sit on my porch for 15 minutes and see about ten cyclists go by.”

I know what she means.

But he wasn’t done.

I totally believe him.

Depending on where your porch is located, seeing a person on a bike may indeed be a rare sight. That’s because in many parts of our city, streets are designed to maximize the speed and throughput of motor vehicles.

When streets are configured in this way they are unwelcoming at best and deadly at worst to people who walk or ride. Folks who have a choice often seek out safer routes.

When people claim that bicycle and pedestrian infrastructure projects are unnecessary because they have not personally observed people walking or riding bikes, they are making one of the most common and most easily deflated arguments against safer streets.

As we loonies in the bicycle and pedestrian advocacy community like to suggest, that’s like saying, “We don’t need a railroad. Trains never come through here.”

What we know from decades of research is that when you build sidewalks and bike lanes, people use them. This is indisputable.

Yet it’s also true that people will walk and ride bikes on streets that are dangerous to them. That’s because they have no choice.

While we may not see them from our front porches, they are walking to work or the bus stop early in the morning, and heading to work or riding home late at night. In this way, they are often invisible to us until tragedy happens.

We notice them then. And we blame them when they are injured or killed.

If a person is hit while trying to cross Abercorn Street on the Southside and the police report mentions that she was not using a crosswalk and was wearing dark clothing, that’s case closed as far as many people are concerned.

They don’t consider that using the nearest crosswalk might add a half mile to her walk home from a long night of waiting tables at a restaurant where she is required to wear dark clothing. Or that the driver may have been speeding and staring at his phone at the time of the collision.

If a person on a bicycle is struck on West Bay Street in the early morning darkness, he’ll be called a fool for riding among the big rigs. They don’t consider that his workplace was located on this busy street and he had no choice but to be out there before dawn if he wanted to make it to his job on time.

These folks are placed in harm’s way every day because we’ve prioritized the convenience of motorists over safety.

Still, those of us who enjoy the privilege of driving have the gall to complain about parking, traffic congestion, and potholes.

(I promise you, you’ve not truly experienced a pothole until you’ve encountered one on a bicycle).

The Savannah City Council has included a “commitment to construct sidewalks on all high-traffic roadways and school routes” in its strategic plan, which will be finalized later this summer. That’s good news for people of all ages and abilities, no matter how they get around.

As new sidewalks are constructed and neighborhood connectivity is improved by trails, more people will choose to walk and ride, and safety will be improved for people who have no choice.

I’m looking forward to seeing the results from my front porch. cs

Prioritizing our priorities about transportation and quality of life