Little bit of soul: Luella and the Sun 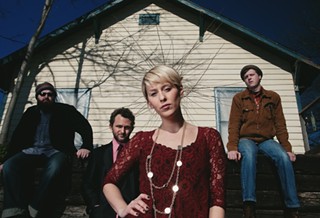 There was a time, not so long ago, when Luella — the powerhouse vocalist for Nashville's gutbucket gospel/blues quartet Luella and The Sun — was a mousy singer/songwriter from Wisconsin named Melissa Mathes.

She made a fine (if a bit shiny) pop/rock album, Play Along, and seemed to be headed in that general direction.

It was her budding relationship with a guitarist named Joe McMahan that triggered what she calls her "organic reinvention."

Says Luella (as she prefers to be called): "I grew up listening to a lot of divas, and old R&B, soul and jazz. And rock 'n' roll too. But Joe has a wider palette of stuff that he introduced me to. Before we were dating and all, we were friends for a long time."

They were, to be sure, looking for some common ground on which to meet musically.

"One day," she recalls, "he and I were digging around and listening to some old gospel, Blind Willie McTell, and found this song 'We Got to Meet Death One Day' that we thought it would be great to just jam on. To put our own twist on."

McMahan had been in an instrumental band (read: no singer) with bassist Adam Bednarik and drummer John Radford. "He called John and Adam," Luella says, "and he said 'Let's see what happens when we put all of us different people in a room together.'

"They came over and we played 'We Got to Meet Death One Day,' and there was just an immediate chemistry. We realized that as a unit, we were bigger than who we are ... what's that saying, the sum is greater than the parts? And that's exactly what it is."

Visceral and spooky, "We Got to Meet Death One Day" is still a key component of Luella and the Sun's mesmerizing live show:

Luella and the Sun is one of the roots bands on the bill at Savannah's first-ever Revival Fest, Sept. 14 on the Railroad Museum grounds. We'll have lots more on the event in next week's issue.

According to Mountain Xpress, "Luella and the Sun deconstructs gospel, distills its soulful essence and uses that to infuse raw, gritty garage rock with an unholy wildness that feels as righteous as it is dangerous."

You don't get much higher praise than that.

And it almost didn't happen. "I always had a part of me that had this big voice," Luella says, "but I never wanted to do it just to show that side for any kind of technically cool reason." To be sure, you don't hear a lot of it in the grooves of Play Along.

Onstage, she is deeply soulful, a dervish, a devil in a blue dress. For a petite little white girl, that voice certainly comes from someplace unpredictable.

She is, she believes, more comfortable, more "herself," in front of a microphone. "When I'm onstage, it's like being possessed," she explains. "This thing comes through you, and it's making fire from the spark that's inside of you. The most essential core part of yourself. And from wherever, it's coming through you, and you can't stop it. There's no time to think about it. It just is.

"The way I sing is a reaction to Joe's electric, raw guitar playing. That rawness and that real primal sense, it stirs that out of me. And with the way Adam plays bass, and the way John plays drums, we stir each other up. Like something is coming through us. We're channeling something."

The band is represented by a 10-inch, self-titled slab of vinyl; for the live experience, the hot fever pitch, root out their live videos of songs like "I Got Soul," "Ditch Rider" and "Soul of a Man." Yow.

"While I'm still proud of the stuff that's a part of my past, musically, it never quite hit the magic spot," Luella continues. "When I was 11 or 12, I would just sing however I sang, nobody could stop me, I just had this pure part of me. I feel like I never touched that spot again until this band came along.

"The magic spot happens, I think, when it becomes really primal. And with this mixture of songs, with these players, it's bringing out emotions that are primal. And guttural. Your immediate reaction to what you feel, it just comes out. And it's not thought out."

On June 8, the house that Luella and McMahan share in Nashville was ravaged by an electrical fire — it started in the home studio, touched off by either a dysfunctional power strip or the rotten wires inside a decaying vintage organ (nobody is entirely sure which).

The band was supposed to start recording its debut full-length there in August; plans have changed, they're working in another studio.

"I feel like it's really meant to be, in some way, as tragic as it is to see so much stuff go," says Luella. "The house is now gutted out, and there's so many memories in there for me and a lot of people ... so many little things in there had soul. And it's still going to be there, it's just going to be there in a new era of it all. Joe saved some of the wood in the house and is going to try to re-use it.

"Everybody involved has been really trying to turn it around and make it into a positive thing. Last year, I planted 48 tomato plants in the back yard. So at least there's some tomatoes back there, even now."