Live through this: A conversation with Legs McNeil 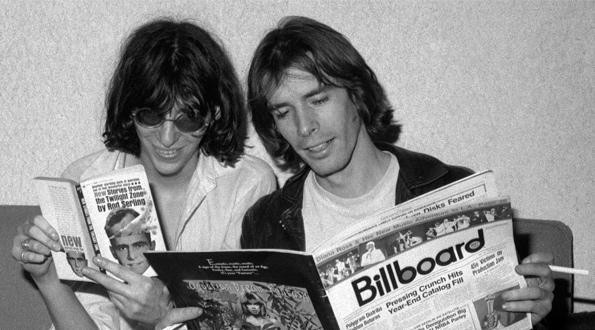 As a co–founder of New York’s Punk Magazine (with John Holmstrom), Legs McNeil was an integral part of the burgeoning punk music scene in the 1970s. He practically lived at CBGB, the low–rent Bowery bar where the Ramones, Television, Blondie and so many others cut their fierce yellow teeth.

Those decadent, drug–addled days — courtesy of McNeil’s wit, creative talent and powers of observation — were immortalized in the 1997 best–seller Please Kill Me: The Uncensored Oral History of Punk. Written with Gillian McCain, Please Kill Me has become both a bible and an atlas for those interested in navigating the black backroads of punk.
McNeil, with McCain, will be in Savannah Jan. 29 to read from their work, take questions and basically yap and yammer about punk, CBGB and whatever else comes up.

He contributed to Dee Dee Ramone’s autobiography Lobotomy, and wrote the forward to Cheetah Chrome’s A Dead Boy’s Tale.

At the Savannah event, he’ll also debut his work–in–progress, Live Through This (original title: Girl With the Most Cake).

I’ve been a music journalist for 30 years, and even now I think of the phrase as an oxymoron sometimes.

Legs McNeil: I just considered myself a journalist. I hated music journalists. The problem with most music writers is that they get assignments that they don’t want to write. And in order to make some money, you gotta write about shitty bands. If they just let all the music writers write about what they liked, I’m sure it’d be really interesting. Holmstrom liked Lester Bangs because he’d turned him on to the first Dictators album.

Is it weird, talking about those long–ago days all the time?

Tell me the story about Live Through This, the book you’re working on.

Legs McNeil: On the last night of a short book tour, in Seattle, I met this girl and I fell madly in love with her. Her name was Shannon McNamera. The book is about my five–month affair with her. She told me that she’d been a heroin addict.

You know, everyone I meet has been something, a former porn star, a former prostitute, a former stripper. Everybody’s got some shit in their life. She actually lied to me and said she had stopped using heroin, when she was using it all the time. She shot up black tar heroin infected with necrotizing fasciitis, which is flesh–eating bacteria. And they amputated her leg. And she didn’t survive the operation. Even now, it’s hard for me to think of her as a junkie. Because the dope gave her energy; she was full of life, and she was always laughing. She was just so much fun and just so sexy. We were just madly in love.

She died within 48 hours, from the time she said “My leg hurts ... I have to go to the hospital.” She died on my birthday. Because the way she died was so brutal, and so fast, I had an amazing amount of anxiety. Which I never dealt with. Because I was born lopsided, with two inches of my right leg longer than my left. They cut two inches off the femur and put my leg back together, and I couldn’t walk for a year. And once I became Legs McNeil at 19, I kind of never dealt with my shitty childhood.

With Shannon dying, not only was I devastated, it brought up all this other crap for me. And I didn’t deal with it. In November of 2011, I went into this trauma rehab called Sierra Tucson, and my trauma therapist said “What is therapy but putting your life in a narrative? And that’s what you do — so you should fucking write it, idiot.”

So is it a therapeutic process?

Legs McNeil: Very! And I never thought any of this stuff was valid. It always just seemed like crapola. Even though I got sober in 1988, I didn’t really go for the therapy stuff, you know? I always preferred the easy way out, if anything. Usually, I’d get angry if I had really intense feelings — which is a way of drowning out the feelings — so sitting here 10, 12 hours a day writing this, and just feeling stuff, was really .... I realized that all you have to do is just feel it. And acknowledge it.

Are you aware of the CBGB movie they filmed here in Savannah?

Legs McNeil: I haven’t really paid attention to it. The guy that’s playing me is cuter than I ever was. People are gonna meet me and go “Hey, you’re not that guy! Fuck you, get outta here!” But Holmstrom was a consultant on the movie, so they’ll probably get it all wrong.

What’s your feeling on somebody making a film about those days?

Legs McNeil: I think they’re gonna make lots of films. They’ve already made the Runaways film, cost $10 million to make and made $2 million because it was so bad. I think that they’ll keep making bad movies until one comes along and captures it, and then they’ll make tons of ripoffs. That’s basically what Hollywood does, just keep imitating whatever sells.

Do you think your book was a reference point for the script?

Legs McNeil: If it was, if there’s information in the book that is not available elsewhere, and they used it in the movie, boy, they’re in for a big fuckin’ lawsuit!

So what will you do when you’re here? How does the evening play out?

Legs McNeil: I just kinda tell the story and read and talk. It’s kinda fun, actually. When I first did it, in the fall, I was really kinda nervous ‘cause I thought “No one cares about me and my dead girlfriend. They just want to hear about Iggy and the Ramones and shit.”

But they really, really liked it. It kind of shocked me how much they liked it. So it’ll be interesting to see if that was an anomaly, or if people really do like it.

A Knocked Out Loaded event