ACTOR Patrick Roper came to Savannah years ago when the film industry started coming south. He’d been acting professionally for a long time by that point, landing roles in all sorts of TV shows, movies, and short films.

Early on in his adult life, a battle with cancer put his career on the backburner. A couple of years ago, he faced another cancer fight. That one stands out because it came just as he was working his way through the audition process for a small role in the upcoming Bruce Dern period piece Emperor, which was filmed right here in Savannah.

Let’s rewind a bit and start all the way back when Roper was a child.

“I’ve always wanted to be an actor, and was just always in love with movies,” Roper tells Connect. “My mother grew up near Ashland, Oregon, where they have a Shakespeare festival. So I spent my summers coming up around Shakesperian theater. That was a cool education.”

Roper grew up in Seattle, in a suburb called Auburn. His high school theater department was regarded as one of the best in the state. After school, he started a theater company and produced shows for a couple of years. That is, until a cancer diagnosis put things on pause.

“It was adenocarcinoma, which luckily they caught very early because that one can be particularly deadly. I went through surgery and chemo, and that kind of derailed my acting career for a couple of years,” he says.

When he went into remission from the cancer, he revamped his career and focused mainly on theater before he finally got an agent and started going on auditions.

“Seattle being not a huge film market, I wasn’t working much and I didn’t have the desire to move to L.A. or New York, so I transitioned out for a while and focused on my side job which was kilt making,” he says. “I ran that business until 2010, and then I retired and traveled around a bit. I ended up settling here in Savannah.”

At the time, the film industry was already making its way from major cities like New York and Los Angeles to Savannah and Atlanta. Roper saw it as a chance to get back into auditioning.

“I started taking classes again and refreshing that muscle, and within a couple of years I was making 48-hour films and winning awards, and all of that kind of stuff,” he says. He ultimately got a role in the Liam Hemsworth film Killerman, which was unfortunately cut from the end product.

Around the same time, he was diagnosed with kidney cancer.

“I had no idea what was going to go on with life at that point, so I told my agent to just keep auditioning me,” he recalls. “I had a surgery scheduled for April, and two days before that surgery I got the audition for Emperor.”

Roper got the surgery and was in the hospital for a week, and got notified for a callback shortly after he returned home.

“I still had staples in, and a drain. So I had to take a back belt so nothing split, and I went in for the callback,” he says. 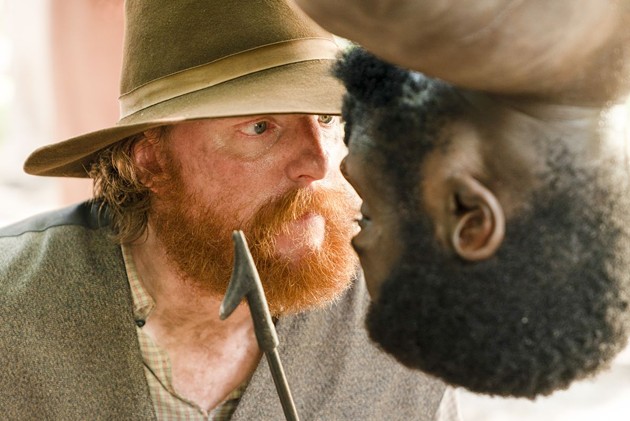 Ultimately, Roper survived his second bout with cancer and has continued working as an actor since wrapping his filming on the upcoming film. These days, he says his health challenges have made him all the more appreciative of his craft and the work he’s been able to do for decades.

“You need to find things that uplift your spirit and give you any sense of joy. Things that take you out of the immediacy of what’s going on. I love watching movies, and so that was always the perfect escape. It takes so much energy and effort and focus to do this for a living, so when I was going through [cancer] and recovering, it gave me something to do that wasn’t it. I just threw myself into research for Emperor while I was recovering,” he says.

“I was able to take what would have been a miserable convalescence for six weeks, and focus all of that energy into researching this role. And that just saved it for me.”