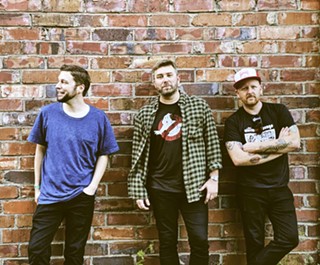 LOCAL ROCK BANDS are getting live music back on the rails Thursday at The Rail Pub at 405 W. Congress St. in Savannah.

The local trio ‘Whaleboat’ along with local band ‘Ember City’ are excited to make another return to The Rail Pub after their last show in September proved to be a major success.

Safety has been paramount for The Rail Pub owners Melissa Swanson and Trina Brown. Sean Moloney, who is the drummer for Whaleboat and also runs booking for The Rail Pub, has been scheduling solo and duo acts while working hard to get things back to normal.

Following state and local health guidelines, while challenging, has not been impossible. Reduced capacity and social-distancing in combination with having the benefit of being an outdoor venue, has provided the owners with means to slowly and safely return to larger acts playing full sets.

Having an earlier-than-usual show scheduled on a Thursday means keeping the audiences smaller and music fans safer.

While the pandemic has posed particularly challenging for local musicians, members of Whaleboat – Brent Collins, Sean Moloney and Blake Yokeley – have used this as an opportunity to focus on writing new material, rehearsing and recording.

Thursday’s show will mark the debut of two new singles, “Sunburst” and “Darkside” from their newly released 3-song EP titled “Lost at Sea.” Their sound is reminiscent of the alternative bands which dominated radio-waves in the late ‘80s and early ‘90s.

The three-piece alternative rock/grunge band, Ember City has been a local fixture of the Savannah music scene since their formation in 2016. The band consists of vocalist/bassist Sarah Poole, guitarist Ryan Taito, and drummer David Richard. Their debut album, ‘Invisible Ruler’ was met with glowing reviews and the trio quickly established themselves as one of Savannah’s best local live musical rock groups.