AT ITS core, A Fragile Tomorrow is all about family.

After the Kellys’ mother passed away, the band took their first break since its inception, only to come back with a new image and sound. Friday, they’ll test it all out with their first show in two years. 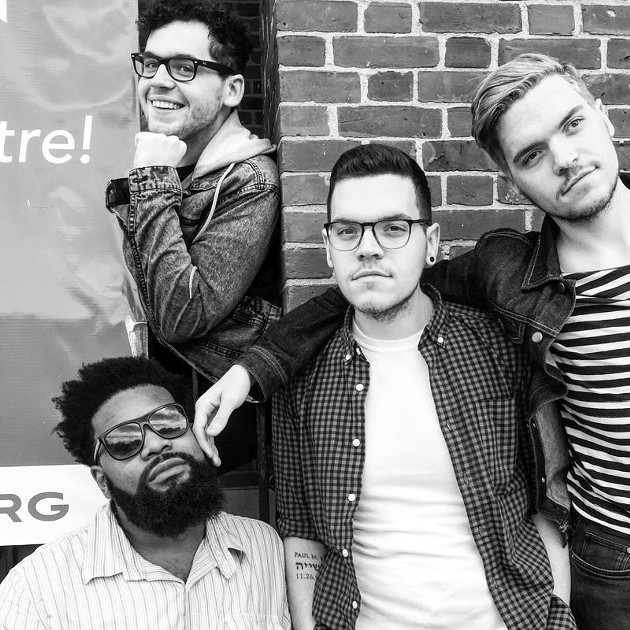 We caught up with Sean and Brendan in Low Watt Recording Studio last week.

How long has A Fragile Tomorrow been together?

SK: I guess it’s been almost 15 years. We started in our parents’ basement in New York and we made our first record in 2006. The first three records were basically glorified demos.

BK: We were actual kids.

SK: I was 11 when we made the first record; I was even younger when we started the band. Then we moved to Charleston.

BK: We somehow convinced our parents to move [laughs].

SK: They ended up loving it! They just took a chance on it. Our dad used to tour with us—he just drove the van. His famous line is that he can’t even play a radio. They were super supportive, but at some point phased themselves out of the whole thing.

BK: Touring with a bunch of teenagers is probably not super fun.

SK: I get it now—we’ve scaled back quite a lot from what we did when we were younger. The El-Rocko show is our first show in almost two years.

Why did you decide to start playing shows again?

SK: Our last record came out in 2015 and we toured a lot around that record. When we came home we were pretty spent on the whole thing. The West Coast tour we did was mostly opening for someone at smaller club shows, a bit more labor intensive.

BK: We had a couple 20-plus hour drives. It’s draining.

SK: Also, our mom had just passed away. At the time, things were dicey and we got home from the tour and we were like, “We’ve got to stop a while and stay home.” We did that, and I made a solo record, and Dominic made a solo record. We hadn’t taken any breaks from the band in our history—since day one it was constant.

BK: We never felt like there was a reason to stop, but it hit a point where we needed a break.

SK: It was the best thing for us. The solo record I made was very 80s-influenced with synths and a drum machine and we realized we could take the band in that direction, too. The thing that got everything really back together was when we were writing for the record. I had primarily written everything, but when I made the solo record we started writing together. The drummer on my solo record, Josh Kean, came from a hip-hop background and was similar to what we were demoing at the time, so we asked him to join. It was a real crap shoot because we were all of a sudden tasked with figuring out what synths and keyboards could play in an upfront way instead of putting an organ on as a filler.

BK: For what we were doing we wanted to try slightly non-traditional sounds and zero in on a sound for the whole record.

SK: It was kind of scary, but it ended up being really easy to figure out what the sound was. The whole thing with our band is we’re not in it for any sort of commerciality, we literally love it and it’s all we do. The only thing it’s ever been about is evolving. This is probably the most radical change we’ve ever made stylistically in the band—it used to be power-pop, but this is not that at all.

What are you planning for the El-Rocko show? Have you ever been there?

SK: We're playing mostly new songs—everything will probably be new to most people who will come. Dominic isn't playing these shows, so that'll be totally different. It'll be our first show with a new drummer.

What was it like bringing a new drummer in?

BK: We were intimidated at first but at the first rehearsal, we were shocked, like, "Oh, this works!" I think going into it, we were nervous about how it might go.

SK: It feels weird because the whole thing is we’re trying to reinvent ourselves, so it feels weird in that way. We’re changing everything and that’s the whole intention. The purpose of these shows is establishing that and getting our feet wet playing live. Before we try to go on some big support tour, we want to be able to play the songs.

How did you hone in on the new direction for the band?

BK: Since we finished touring from the last record, we just tossed around ideas. We basically spent a good year or more talking about things and we'd go with an idea for a while and then abandon it.

SK: It’s a lot of trial and error, taking one piece of one idea and putting it somewhere else. Image-wise, that took a while. A big part of this whole process was our mom’s passing. After she died we probably could have stopped for a good six months but I immediately thought, “Okay, I need to get back to work.” After I got back from Charleston I came [to the studio] and wrote a bunch of lyrics. It just reinformed everything—everything else kind of fell into place image-wise. In the days after mom died, we wanted to make sure we didn’t let go of this record. That was the driving force. If we had let it slide, she would have been the first one to be like, “Get your shit together.”

BK: She heard some demos in their early stages—she was into it.

SK: The biggest thing was she always joked, “When are you going to write a song about me?” I never did until after she died—I write lyrics last, so they come way later. I did start working on something about her, but I never showed it to her. I kind of regret that but it would have been a little too heavy for her at the time. Now half the record is about her. I didn’t want it to be the record about our mom dying, if that makes sense. I didn’t want it to be sappy or “feel bad for us” kind of songs .She was an advocate and activist; she was very outspoken politically, so half the record is political. I think also her passing made me say fuck it. I’m done with the whole thing about being careful about who you’re offending. If people are going to like us, they’re going to like us. If they’re not, they’re not. The more you realize it’s art, the less you care about that.

BK: You have to make the things you want to make.

Were you nervous about being so outspoken?

SK: It's a little scary at first. Some of the themes I explored, I could picture members of my family being like, "What the hell is this song about? Why are you talking about police brutality and racial injustice?" I knew that would ruffle some feathers being the son of a police officer, but he's cool with it. Those were the issues that were pressing to us because we have the right to say what we want through this medium.

Our bass player is black and I’ve had so many conversations with him about his interactions with police and his experience with racism. Dominic’s soon-to-be wife is black. Why wouldn’t I write about this? These people mean everything to me.

The song I keep referring to specifically, the first line is, “White man, look in the mirror.” I was just like, “Okay, I’m going there.” I couldn’t stop it from there. I was so frustrated. Why can’t we look at ourselves in the mirror and realize that we are privileged? White cisgender men are the most privileged people in this country. Why can’t we just acknowledge that and recognize the need for change so there’s not this vast inequality? It makes you examine, “Well, how is my behavior? Have I always been the most perfect ally or advocate? Are there things I can work on?” It makes you examine all of it. Now that I’ve gone down that road I just want to explore it even more. I think in the future I can go further with those ideas.

Speaking of the future, what are your plans going forward?

SK: We were just talking the other day, and I think we just want to keep making records. We want to be one of those bands that's always working and trying to be better. I think the idea is that our band is going to be a constant thing.