The Old Cabbage Garden road had split, and I’d picked what seemed like the most traveled direction, Robert Frost be damned. 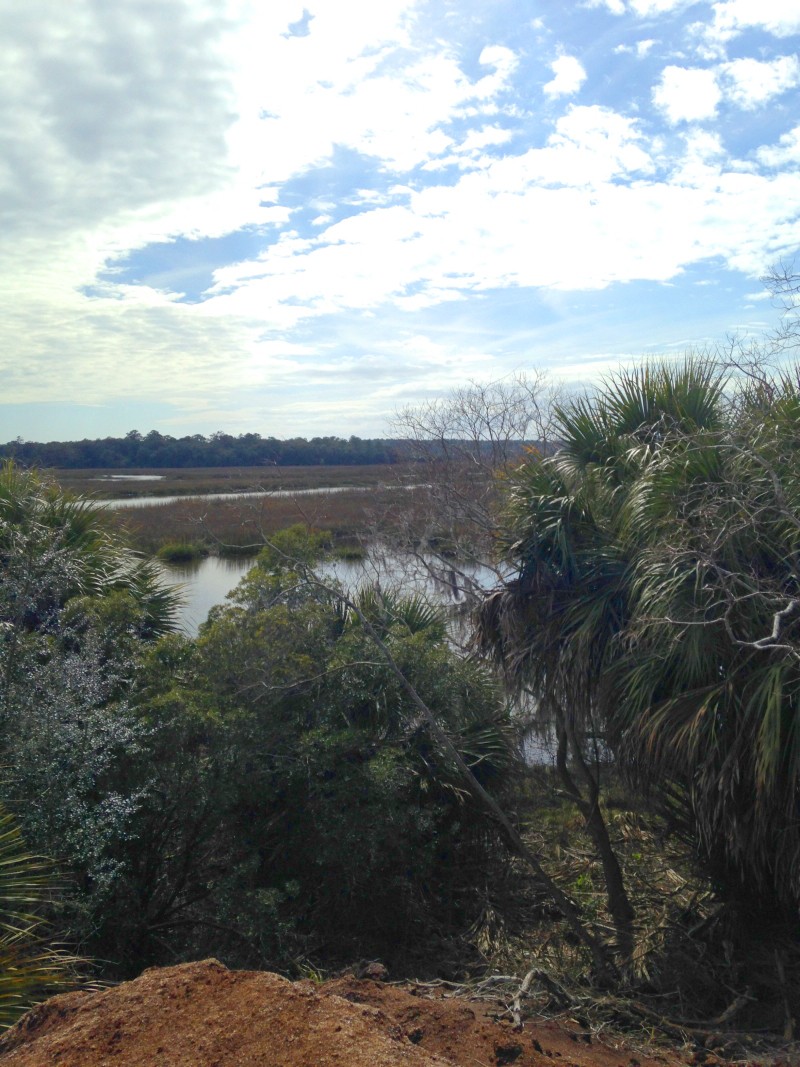 The majestic marshes and maritime forests of Ossabaw Island remain some of Georgia’s last wild places.

I WAS definitely lost by the time I saw the little brown pig.

The laminated map had shown a single loop trail, so simple that I’d left it on the coffee table of the Clubhouse so my hands would be free.

I’d set off into the wilderness of Ossabaw Island at a brisk pace, rolling the bottoms of my boots silently along the pine needles so I wouldn’t scare off the wildlife.

I’d been rewarded almost immediately when a pileated woodpecker as big as a chicken swooped down from the moss canopy and landed on the trunk of a loblolly pine about ten feet away.

It twitched its red mohawk and began to hammer out a frantic rhythm as I slid by. The quiet settled again like a cloak, the branches of the live oaks reaching up and out in their slow motion dance with the sky.

Then the Old Cabbage Garden road had split, and I’d picked what seemed like the most traveled direction, Robert Frost be damned. The tamped grass trail had diverged again, and now I’d been traipsing in the forest for hours, second guessing not only my scouting skills but my decision to come to the Ossabaw Island Writer’s Retreat at all.

Who do you think you are, leaving civilization for five days to fiddle with a novel? asked the sneering voice in my head, the same one that criticizes my housekeeping and wonders nastily whether skinny jeans belong on anyone over 40. You’re a newspaper blogger woman. Stick to what you know.

In my college creative writing workshops, I would sit at the back doodling on photocopies of my terrible short stories while my peers picked over the plot flaws. I never gave a thought to graduate school, dogged by the feeling that I didn’t belong in a classroom discussing craft and character development.

All I wanted was to be on the road like Jack Kerouac, scribbling out observations and adventures on a single scroll of toilet paper.

Moleskine notebooks and a laptop proved more durable, but that’s mostly what I’ve done, churning out true stories and contentious commentary for the last couple of decades. But lately my heart has tugged with a book to call my own, even if it means actually having to learn how to write one.

I figured this barely inhabited island would be a good place to concentrate. I did a little dance when my sample chapters passed the retreat’s application process.

But after my first workshop, I realized my plot had all the sense of a whiskey drunk and that my main character was an irredeemable asshole.

To process the practical wisdom I’d received from my instructors Lenore Hart and David Poyer (bestselling novelists both), I’d decided to take a walk in the woods. Now I was not only adrift in my fictional world, I was completely disoriented in the real one.

You are one sorry specimen, said the sneer.

As cold and nervous as Little Red Riding Hood without her cape, I was about to turn around again when I came upon the small brown pig nosing around under a yaupon holly tree, its cloven hooves planted delicately in the loamy ground.

With its beady-eyed stare, it seemed to mark me as an imposter. I froze.

My mind went to Sandy West, the brave heroine who saved Ossabaw island and its wild things. At 102, she still lives in her family mansion on the marsh, part of the deal struck when she sold the island to the state in the 1970s.

Understandably reclusive these days, she remains a fierce character in the nail-biting drama about the preservation of Georgia’s last wild places. What will happen in the chapters after she passes is anyone’s guess.

Sandy West would never be scared of a pig, scoffed the voice. She could probably outrun it.

Truth be told, it wasn’t that I was afraid of being gored by a wild hog or swallowed up by an alligator or even being chased by the ghost of a bloodthirsty Creek Indian.

My biggest fear was that I would be that visitor to Ossabaw, the one who leaves the Clubhouse without a map or a phone at four o’clock in the afternoon and gets everyone all worried when she doesn’t come back by dark and then Ossabaw Island Foundation fix-it guy Mark Frissell has to drive around in the green pick-up with the bad transmission until he finds Idiot Guest next to a magnolia, chewing on a piece of bark.

I imagined myself humiliated in front of my writing peers, ostracized from the dinner conversation about the specificities of emdashes and semi-colons. Worse, I might be deemed unworthy of Ossabaw’s magic, banished forever by Sandy herself.

“This island has a certain kindness, a generosity,” he had counseled as two of Ossabaw’s resident donkeys ambled over to the Clubhouse porch for extra apples. “There’s something here you can trust.”

A poet of precision and integrity, Tony is not one to throw around careless metaphors. If he spoke of the island’s benevolence as real, it must be.

So I took a small scout step forward. And cracked a stick.

The pig scuttled back through the saw palmettos with the confidence of a creature that knew exactly where it was going. I hoped it wasn’t to round up its bigger friends and mount an attack on the pale, two-legged animal walking around in circles.

Later that night, while I was nursing my blisters on the back porch with a cup of tea, a pair of headlights would cut the darkness and a cotton tuft of white hair would lean out the passenger side of the cranky green pick-up.

I’d squint disbelievingly over the railing. “Is that Miz West?”

“It sure is,” would come a good-natured holler.

Hopping down the stairs to meet the island’s elusive icon, I’d see longtime Ossabaw friend and artist Betsy Cain at the wheel.

“We’re going out to the field at Middle Place to gaze at the stars,” Betsy would offer, as if it was perfectly normal to be driving around late at night in the inky black wilderness with a centenarian.

The others writers would come outside to pay their respects, and though hard of hearing, Sandy would ask us all what we were working on and whether the island was treating us right.

Before Betsy drove off, Sandy would catch my hand in a surprisingly strong grip, her nails painted coral.

But none of that had transpired yet. After the pig disappeared, I wandered for another hour before finally stepping onto the well-worn track of the island’s main road. The Clubhouse was still miles away, and my literary notions far from fruition.

I arrived just in time for dinner, ready to get back to work.