IN July 2012, newlywed Matthew Kohler was killed at the age of 22 when a car ran him down from behind while he was riding his bike on Highway 80 near Bloomingdale.

He was the only child of Debbie and Andy Kohler.

“I guess we’re different from a lot of grieving parents who’ve lost a child. We talk about Matthew all the time, about how much we love him and how much we miss him,” says Matthew’s mother Debbie.

“We don’t talk about him as if he’s still here—he’s not and we know he’s not. But we talk all the time about things we can do in his memory, to try and alleviate the tragedy of other parents, other wives, other loved ones.”

Matthew is remembered by everyone who knew him with words like, “energetic,” “bright,” and “joyful.” His loss wasn’t just the loss of his family and new wife Kori—it was a communitywide blow.

“It wasn’t just us who was hurt,” says his mother. “One of his friends couldn’t even talk about it for three years. The grief is so deep.” 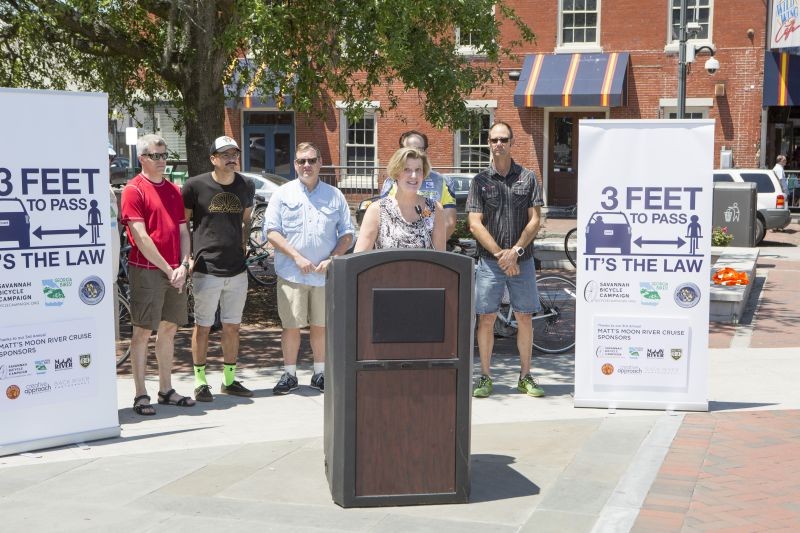 Debbie Kohler, Matt's mother, at a previous edition of the Cruise

You can enjoy brews, eats, bicycling, and great company, all for a great cause: Promoting better bicycle safety and infrastructure so that death’s like Matt Kohler’s won’t happen again—and especially hammering home the state law that says a motorist must give at least three feet of space between themselves and any bicyclist on the road.

Initially Kori Kohler’s idea, the family’s close relationship with Moon River has made the Moon River Cruise an annual spring staple and an important vector for meaningful advocacy and change.

“A lot of people, especially in larger metro areas, really don’t understand how important it is to change infrastructure to allow for more and safer bicycle use and to have structured lanes,” says Debbie, who especially likes the idea of a physical curb between car lanes and bike lanes.

“If that was in place, Matthew might have had a chance to live,” she says.

Brent Buice is executive director of Georgia Bikes!, a statewide organization which recently relocated its headquarters to Savannah.

Why Savannah? We stand out for two reasons, Buice says.

“Number one, we absolutely have the highest number of people in the state riding bikes on a day-to-day basis, including far and away the most bicycle tourism,” he says.

“Number two, and most distressingly, Savannah also has the highest number of bicycle fatalities in Georgia—including metro Atlanta.”

No, that’s not fatalities per capita. Savannah literally sees more people dying in car vs. bike accidents than Atlanta itself.

While our high casualty rate is related to our higher local rate of bicycle use, “We can also look around at the infrastructure here, or the lack thereof, and see all kinds of ways to improve it,” Buice says.

The fun happens in the Moon River Beer Garden.

The motorist who struck Matthew, Debbie says, had recently ingested the powerful—and often abused—sleeping aid Ambien, according to toxicology reports. He apparently tried to keep on driving after hitting Matthew, but the car was disabled and he had to stop.

“From what I’ve heard and read since then, that’s what happens way too much of the time—people hit someone on a bike and just keep driving, a hit-and-run,” she says. “It happens all the time.”

Debbie felt compelled to nearly full-time political activism for road safety for a while after her son’s death.

“I have been to the state capitol several times and sat by legislators’ offices and waited for hours to see them when I couldn’t get an appointment,” she says.

For one legislator who refused to call her back or return her emails, she literally waited all day outside his office for a chance to speak to him about bicycle safety measures.

Her activism extends to sales tax measures such as SPLOST.

“I won’t vote to approve any funding measure that doesn’t involve bicycle safety or devote more funding to bicycle safety. I just won’t do it,” she says flatly.

“To just make more lanes is to add more cars. Adding bike lanes is what we need to be doing.”

Buice says that measures such as protected bike lanes are valuable for the majority of bicyclists “who aren’t middle-aged men wearing Lycra. For most of us bicycling is a convenient and fun way to go a few blocks.”

He says the issue in Savannah is mostly one of political will.