The Savannah native and multitalented creative force honed his craft as a musician and performer here in The Hostess City. Now, he’s ready to take what he’s learned to the next level.

After being accepted into American Musical and Dramatic Academy in New York City, Hodges is finding unique ways to use his talents toward his tuition.

“My financial aid didn’t pay for all of the tuition, so I wasn’t able to leave in October like I expected,” he explains. “I waited until January and began picking up jobs, doing concerts to raise money, and also looking at alternative schools like Columbia College Hollywood as a backup plan.”

“I did some extra work and signed to Halo Modeling,” he says. “That gave me the opportunity to go to New York and audition in front of some agents. It opened me mind up to art as a whole. It used to be all about music and hip-hop...but at the end of the day, I want to try to use every avenue I can to impact people in a positive way.”

He did just that with the release of his 2016 EP ‘B.U.F.U.,’ which featured the smooth single “Savannah Weather.” People connected with its positive message and deep groove, and Hodges received an outpouring of support.

Breaking into the scene early on was a challenge for Hodges.

“It was difficult, because I was putting my music out there, and my peers weren’t too receptive to it,” he remembers. “It was different. I went to Johnson [High School], and a lot of the people I was surrounded by were used to trap music and gangster rap, but I wasn’t about that because it wasn’t my life. They weren’t receptive to the idea of me as a rapper. I was discouraged, but it fueled me, and I kept getting better.”

When he felt ready to perform, Hodges was still too young to be admitted into the clubs where his fellow rappers were performing and battling.

“I ended up having to start my own shows,” he says. “Then, doing my own shows opened me up to finding the right shows. I connected with the people who supported me, connected with different artists, and made all these connections and we collaborated together. I just had to make my own road, in a sense.”

Hodges’ next musical endeavor is a project called ‘My Greatest Contribution.’

“The whole point of that project is that every person born on this planet has a purpose, and it’s important to figure out your passion and contribute to the planet for the betterment of mankind,” he says.

One track from the unreleased project already has folks talking: “Talmadge Bridge.” With a hook that borrows its melody from “London Bridge” to chant “Talmadge Bridge is falling down,” the song directly addresses recent efforts to rename Savannah’s bridge, which currently honors Eugene Talmadge, a former Georgia governor with a legacy of racism and social injustice.

“My personal take on the song is pretty much talking about destroying the old ways of thinking and making something new,” Hodges explains. “It’s really relevant, and my take on the whole bridge thing, doing my research...no one’s perfect at the end of the day, but it’s really quite offensive, and for that to be the way we welcome people to Savannah...I don’t feel like it’s a great representation of the city, because of how far we’ve come from the era in which they gave it that name. We should call it something that’s a reflection of us today.”

When Sulfur Studios’ AJ Perez heard the song, he told Hodges about local group Span the Gap, an organization working to rename the bridge. Hodges reached out, offering his song as a way to spread awareness.

“I was just recently introduced to Span the Gap, but so far, everyone’s cool, professional, and open, especially for something like this,” he says. “It’s big for them to be open to using hip-hop. It means a lot to me. A lot of people close themselves off to hip-hop because of the stereotype—it’s cool that they get it.”

Hodges looks forward to performing the song at the first installment of his Going Away Concert Series. The lineup of shows is a prime example of how Hodges blazes his own trail. The first event, held at 1308 West: An Upscale Rental Facility, is an accessible celebration that will accept donations at the door (orofits will support Hodges’ move). Hodges himself will perform, and has invited friends The Indigos, Jacob Evans, Bak, Jah Jr., Smooth, Reese, Ajaye, C-Nell, Nephew, Split Soul, and more to join him.

“When I create my concerts, I make sure the presentation is on point,” Hodges says. “The sound is on point, the lights are on point. I reach out to my friends—I have a lot of friends who do music, and I appreciate their work. They come perform with me, and we have a concert for our supporters.”

Right now, Hodges plans to host one show a month until he makes his big move in January. From there, the passionate artist looks forward to taking any creative challenges that he encounters.

“Whatever I can do to learn, I want to try and give it my best and tell a story the best way I can,” he says. “I see myself being like some of the people I look up to, like Will Smith and Ice Cube. They did music and acting, and also wrote and directed. I see myself doing all that, writing commercials, soundtracks. I just want to be involved and use my time in as many ways as possible.” 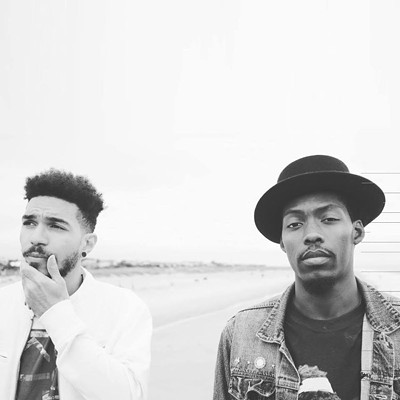