Exhibit offers differing perspectives on the nature of decay

THOUGH SUMMER is traditionally the slow season for art in Savannah, the city’s Department of Cultural affairs has decided to offer up one of its most unique exhibitions in recent memory during the month of August.

The exhibition of paintings and assemblages will open at the Cultural Arts Gallery on Friday, August 5 with an opening reception from 5–9pm. Furlow will deliver a short talk at 7pm. The show will remain up until August 26.

Prior to their selection by the city, Furlow and Jossim had never met before. They were paired up by the Department of Cultural Affairs, created all of their works separately, and only came together to discuss the title for the show.

I’ve said before that I tend to favor group exhibitions where the artists have chosen to exhibit together for reasons outside the bonds of friendship. I still stand by that.

When artists have a previous relationship (friendship or otherwise) and choose to show together it can become difficult for them to apply a sharp critical eye. Editing your friends can be a touchy topic and sometimes shows suffer so that friendships don’t have to.

In this case, the unexpected pairing has allowed for an interesting dynamic: one in which both artists have chosen to allow their large bodies of work to breathe separately. Furlow will show 24 oil paintings and Jossim will show 20 assemblages from his body of work titled “Preservations.” While the works inform the same theme, each benefits from having been sequestered from the other.

Life: Rooted trusts that its audience is smart enough to get the point without being hit over the head with it.

“What’s happening between Jeremiah’s work and my work in this exhibition is a look at life, the gritty part of life,” Furlow told me when we spoke on the phone last week. “We’re living this life, all of us, on this spinning planet and a lot of it is wonderful and beautiful but there’s also a lot of decay.”

For her part, Furlow certainly doesn’t flinch away from dealing with the more visceral aspects of decay. When I ask her to tell me about her painting process, she begins like this:

“If I’m driving down the road and I see 20 vultures sitting there interested in an object on the highway, that’s a cue for me to get my camera ready.”

Furlow’s paintings are borne out of a body of work she’s been creating for the last 15 years. Fascinated with excavating the beautiful from within the depths of the decidedly un-beautiful, Furlow photographs roadkill and translates it from grisly eyesore to delicate finery.

“When you zoom in on an image of meat or the animal body, what you come across are these lovely nuances of color and shape,” she explains. “There’s also an appreciation for how wondrously made we human beings—and animals and insects and all forms of life—are.”

Furlow’s paintings are abstract, far from what anyone might read as gory, but still rooted in the reality of mammalian anatomy. Pieces like “Battenburg Nursery” emphasize both the fecundity and fragility of living tissue.

For Furlow, fragility is a major theme. Disintegration and decay, she says, are happening constantly all around us and inside of us.

Jeremiah Jossim’s “Preservations” works are a testament to that as well.

For the last two years, Jossim has been collecting dirt, sand, water, rocks and other small bits of natural ephemera from places like Bonaventure Bluff, Hutchinson Island, and Triplett Swamp. Life: Rooted will feature 20 of these works; 10 locations around the Chatham County area are represented by two of Jossim’s pieces each.

The artworks are small wooden cabinets (which Jossim builds by hand) filled with twelve mason jars, each containing those natural elements which represent the area. Essentially, they are simulacrum, designed to preserve and tell the story of a place.

“[The artwork] creates a portrait of the place though the earth,” he explains. “The dirt is the bottommost tier of the earth so it evokes groundedness. When it’s paired with the botanical side—the collections of leaves and brushes and sticks—it becomes a more complex portrait of the place through very basic elements. When we look at the forest it’s so big and scary, but if it’s organized and put in a box people think it’s beautiful and inviting.”

Though the body of work is titled “Preservations,” many of the materials used in Jossim’s earliest pieces are going through the inevitable process of decay. Paired with Furlow’s paintings, the exhibition offers a sort of micro/macro look at the process of natural disintegration.

Set in the Cultural Arts Gallery, where these depictions of nature will be examined in an urban setting, the juxtaposition feels even more poignant. 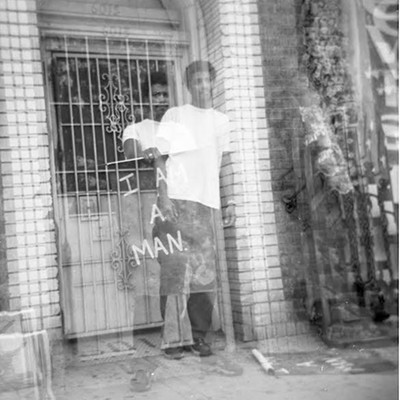