"I love Savannah. It’s kind of my home away from home," says mandolin legend Tony Williamson. The virtuoso player has been having Randy Wood work on his instruments for many years, and he’s coming back once again—except this time to play Wood’s Pickin’ Parlor.

The North Carolina native has made the mandolin his bread and butter for decades now, not just as a player but also as a dealer. He operates Mandolin Central, a website and company that hosts numerous vintage mandolins including coveted Loar and Gibson models. He’s also the recent recipient of the North Carolina Heritage Award for his contributions to music history.

Williamson, known for his genre-hopping musical sensibilities, is set for a Pickin’ Parlor show alongside the Onyx Club Boys, a fellow North Carolina group that performs the music of Django Reinhardt. The night of gypsy jazz is taking place on Sat., Dec. 14 at 8 P.M., and we caught up with Williamson before his arrival in town. 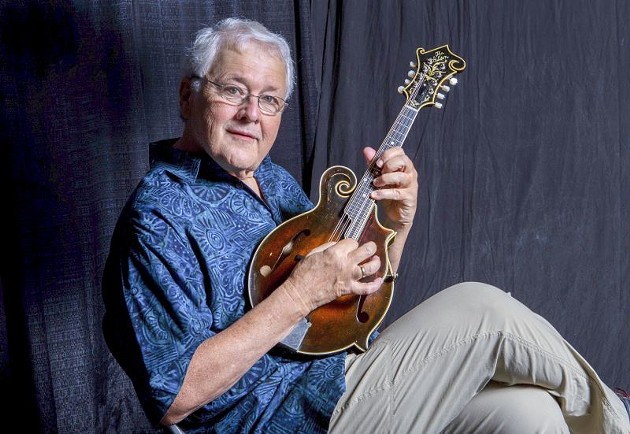 I’m really interested in how diverse you are in terms of the genres you live in. Do you feel like you’re always searching the instrument and discovering things as time goes on?

Absolutely. First of all, I love to travel. Travel exposes you to a lot of different cultures, and really gives you insight into different ways to completely different ways of approaching music. I grew up in a very rural area, exposed to what we called country music back then. I’ve played music in Brazil, Japan, Taiwan, France, Italy, and just came back from Spain, in fact.

A collaboration with a young man from Senegal led me into West African music, which interestingly led me to discover this gypsy jazz band that I’m bringing to Savannah. Their bass player also plays with my friend from Senegal. They knew that I played the music of Django Reinhardt. Do you know who told me about Stephane Grappelli? Kenny Baker, the famous fiddle stalwart and creator of Bill Monroe’s sound of the 60s and 70s.

When I first met him in 1969, he was playing Django Reinhardt on the guitar. I went straight out and bought the record, and it was a whole other world. So I’ve been really interested in that music for a long time.

What attracted you to the mandolin?

My family was musical. Going back, my family settled in central North Carolina around 1740. My parents were the first generation of millworkers. In those days, I grew up on a farm that did 19th century-style farming. We didn’t have television, so our entertainment for the weekend was people coming by and playing music. My dad and grandfather played. I think it was my brother’s 5th birthday, and I was 4, and my dad bought him a mandolin. My brother told me not to touch it, but I literally could play that sucker in no time.

My brother just kind of gave up on fighting me on it so he took up guitar, and we were soon playing with the grownups in their weekend sessions in our house and in my dad’s shop. The songs we were doing were stuff like “Sweet Bunch of Daisies.” You know, real tradition and fun stuff that aren’t really complicated.

But I’d never really thought about a time when I didn’t want to play music. It’s always been my passion, my job, my hobby, my career.

Something I’m really curious about is your website, where you sell vintage mandolins. I know there are coveted eras for certain brands like Loar and Gibson, and I imagine you’ve played countless of them. Is there one that you’ve played or owned over the years that holds a particular amount of importance?

Well, without a doubt it’s a 1923 or 1924 Gibson F5 signed by Lloyd Loar. I will have that when I come to Savannah. I fell in love with this sound—when I was a kid, Bill Monroe let me play his mandolin, and from that moment on I wanted one just like it.

I don’t come from a wealthy family, so how in the world was I able to get one? These instruments have always been fabulously expensive.

The way I approached it was through trading. I started out with a really cheap mandolin, and then traded it for a better one. Then I traded that, and then I traded again and got my first Gibson.

Slowly, I learned the skill of smart trading. When I got my first Loar, I didn’t stop trading.

My goal in my business, Mandolin Central, is to find good homes for really great instruments, and I have that in common with Randy Wood as well. cs