Maple Street Biscuit Company: A true taste of the South 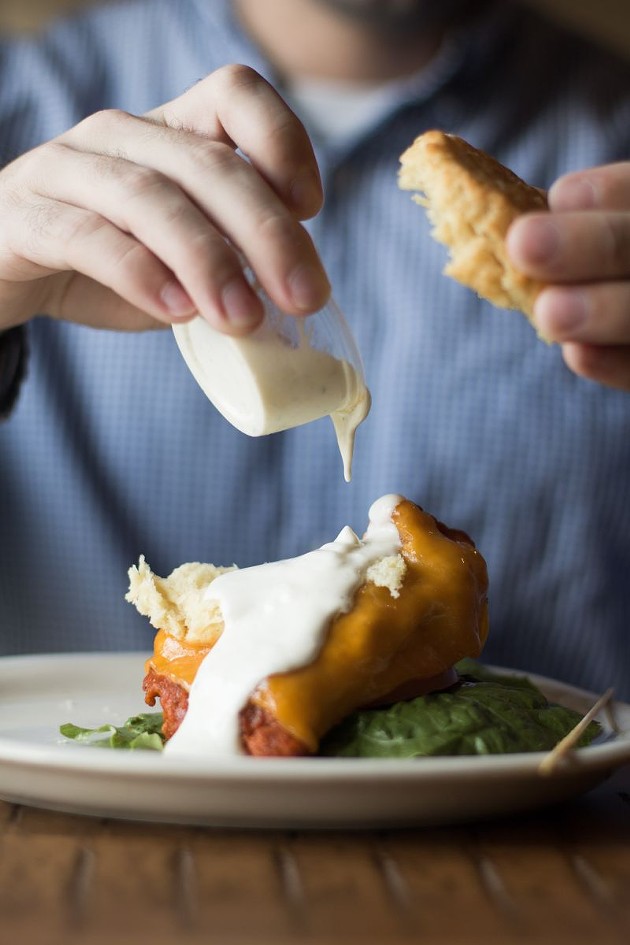 A TRUE Southerner knows what it means when a restaurant offers a catfish head biscuit. But a word does not exist to fully describe the gigantic-sized biscuits offered at Maple Street Biscuit Company.

The staff does not stop with serving biscuits so large your plan of attack has to include a fork and knife, but they are also cranking out “400-600 biscuits a day,” Christina Cocita, Community Leader of the Savannah store, tells me.

With 21 different locations, Savannah’s Maple Street Biscuit Company is not the restaurant’s first storefront. Maple Street opened in the Port City this March because they wanted “to be a part of the beautiful Savannah community and graciously serve as many people as we can,” Christina explains.

Our neighbors to the south were lucky when the franchise opened its first location just a short six years ago in San Marco, Florida.

When it comes to Maple Street’s food, I have to warn you, you are going to have a very difficult time deciding which biscuit to devour. But if need be, you can come back the next day to try a completely different Southern pastry.

Regardless of your decision, you will be pleased with the flavor of the biscuit alone, even without trying anything else. Why, you ask?

All you have to do is take a gander at the color of the flaky delicate bread to see that there is so much butter jammed in that the biscuit has a slight yellow tint, and every good Southerner knows that butter makes everything better.

According to Christina, “the Five and Dime is one of our most popular items.”

For good reason, because this plate-full even comes with the kitchen sink. Balancing on top of a thick biscuit bottom sits a well-endowed filet of chicken that is generously seasoned, breaded, and fried. Piled high atop that is a warm melted slice of sharp cheddar cheese, and thick slices of pecanwood smoked bacon.

Before placing the top of the biscuit on, the chef adds a rich and tender fried egg, then a ladle-sized scoop of sinful homemade sausage gravy that tastes just like the kind every Southern grandmother make. 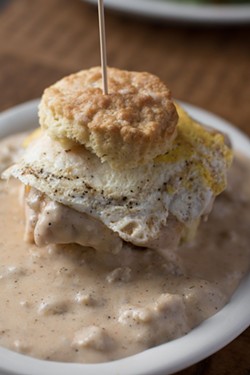 The chicken is juicy, delicate, and so well seasoned that it stands up to everything else on the dish. As for the white gravy, it has a slight pink hue from all of the herbs and spices which adds quite a kick to your tongue.

Lastly, your tastebuds will detect a slight hint of maple, you can thank the bacon for that. Although the pecanwood smoked bacon costs a bit more than the average stuff, the restaurants opts for it because it tastes so much better.

The Squawking Goat was “featured on Food Network’s Food Paradise,” says Christina. This creation is like nothing I, or you, have ever tasted.

Sandwiched between the extra buttery biscuit is that out-of-this-world fried chicken (that’s right more fried chicken), seasoned, battered, and fried goat cheese, and an extra large dose of pepper jelly. The goat cheese has a thin tender crust with an oozing center that is tangy, the perfect juxtaposition to the sweetness of the pepper jelly. The pepper jelly has a flavor reminiscent of an Asian sweet and sour sauce, but instead it is fully Southern.

Let’s not forget The Firebird, a recent addition to the expansive menu. As you may have guessed by the name, this work of art comes with fiery red buffalo chicken.

Just like almost everything on the menu, the buffalo sauce coating the elephantine breast is made in house and is sweeter than many hot wing sauces. Paired with the spicy chicken is lettuce and tomato, which is a refreshing touch to the bold buffaloed flavor.

Since the biscuit is just about too large to eat with two hands, I recommend removing the top bun and pouring over the thick luxurious ranch dressing that comes on the side (or their delicious bleu cheese if that’s more your style).

If biscuits are not really your thing, Maple Street offers their own take on chicken and waffles: The BAM! Yo Yo.

Setting their waffles apart is the addition of nutty asiago cheese and salty bacon into the batter — subtle but unique components to the dish. Texturally, the waffle is chewy yet tender which permits the syrup to soak in without destroying the integrity of the bread. 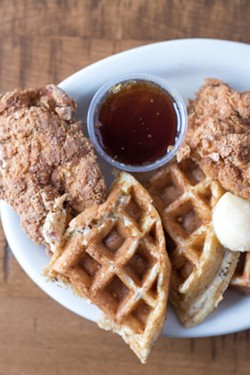 Many chicken and waffle servers skimp on the amount of chicken allotted, leaving the customer with more waffle than necessary. At Maple Street, the sizable chicken fingers gives each patron a bite of chicken for every bite of waffle.

To wake you up and cool you off on a hot Savannah summer day, the Maple Vanilla Latte is different than any other brew in town, which is what I think makes a true signature drink. Jacksonville’s Redleaf Coffee’s espresso is the base and, true to latte form, steam milk is added.

The twist? Maple Street’s very own house-made maple vanilla syrup. Whether you drink it hot or cold, the maple and vanilla melody is light, and touches your tongue with the slightest hint of floral vanilla to complement the wisp of deep sappy notes of maple.

As for the rest of their coffee, it is available in three different roasts, maple tat, a medium roast, dark bark, a dark roast, and light amber, their light roast. Just like the coffee, the restaurant sources their hot sauce, available to try on each table, from a local producer in Jacksonville, Florida.

Christina tells me that, Maple Street’s aim is to “help people, serve others, and be a part of their community.” So no matter the next location, you can be sure that the store will bring delicious food and a positive outlook in improving the community.

As a Savannahian, I’d say bringing in fried chicken and biscuits is a great way to break into ours.