Marché de Macarons: ‘We are local. We are homemade.’

Check out their new location at 5002 Paulsen Street or order online at marchedemacarons.com 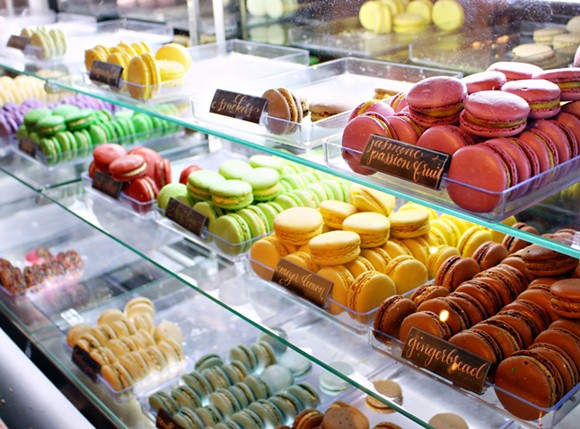 Five years ago this month, best friends Amy Shippy and Laura Hale decided to partake in the holiday spirit by hosting a ladies night cookie exchange. What they didn’t realize was the cookies that Shippy made would be an instant success, leading the friends to become the owners and executive pastry chefs of Marché de Macarons.

Shippy and Hale have a few charming local shops, one on Hilton Head Island and another on Abercorn Street, next to the Lucas Theatre. Additionally, as of November 28, the two business partners closed their Eisenhower location and relocated to Paulsen Street in the former Savannah Squeeze space. 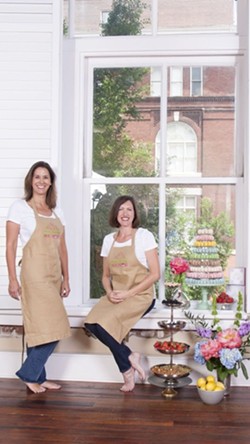 From that first day of making French macarons for the cookie swap to finding their newest location, Shippy professes that every part of their journey has been “fortuitous.”

“We have been blessed.”

Shippy, a mother and wife who simply enjoyed cooking for her family, found herself excited about that Christmas cookie swap five years ago. After much deliberation, she chose a French macaron recipe from her favorite blog solely because they “were very pretty.” She did not know that these sweet treats were extremely finicky and required skill to perfect.

“They all came out right the first time, feet and everything. I had no idea they were hard to make, I just used the recipe.”

Given that her cookies were the talk of the party, Hale begged Shippy for the recipe.

“Come on over, we’ll make some together,” Shippy cheerfully beckoned.

While their first batch failed, Shippy and Hale’s efforts were eventually rewarded as they made batch after batch of perfect flavorful French macarons.

The entrepreneur in Shippy said, “I think we can sell these!” So the twosome passed out the cookies at their kids’ travel soccer game, leaving there with 18 dozen pre-orders.

“We have a business!” Shippy declared.

Shippy and Hale used the money from their soccer sales to lease a kitchen on Skidaway Road, sharing it with a couple that owned a catering business. Using their personal kitchen equipment in this space, the two bakers struggled to turn over profits during the first 11 months.

“People got excited and unbeknownst to us, we had a cookie business that started as a hobby.”

After spending six months in the modest space on Skidaway, Shippy and Hale were told that they could no longer co-lease that kitchen. Incidentally, while Shippy was dropping off her sons at Taekwondo, she noticed that One Love Jamaican Restaurant on Eisenhower had closed.

“We ended up moving our space there and the Department of Agriculture was able to certify our kitchen.”

One year later, Shippy and Hale decided to take their business downtown, renting a small display case in a cupcake shop. In an effort to find a downtown location of their own, Shippy and Hale stumbled upon Tier Luxury Cakes’ “for lease” sign in the window on New Year’s Eve in 2012.

The macaron bakers signed the lease the next day and opened their current Abercorn location on New Year’s Day in 2013. 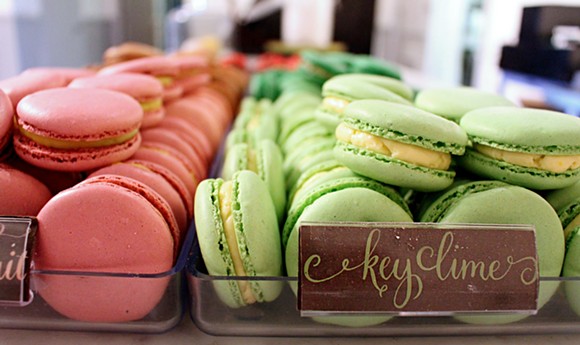 Homemade creams, jellies, chocolates and caramel are sandwiched between two circular shells that are airy with a delicate crunch.

In November of this year, the two best friends found themselves looking, yet again, for a new location. After a full day of searching for available rental spaces, Shippy stopped by Savannah Squeeze for a smoothie.

The juice bar owner mentioned that they would be relocating to the Bikram Yoga Studio at Habersham Village and rebranding their business to more than just healthy drinks.

The French Macaron, not to be confused with the macaroon, which is a coconut haystack, has a shell that is made from stiff egg whites and almond flour. At Marché de Macarons, everything, including the almond flour, is made from scratch.

In fact, the two Savannah locations have bakeries where macarons are made daily. Homemade creams, jellies, chocolates and caramel are sandwiched between two circular shells that are airy with a delicate crunch.

“Nothing comes from a jar.” The caramel is simply sugar, butter, cream and salt. The jelly filling is purely strawberries, pectin and sugar.

At Marché de Macarons, customers can find a collection of macarons stained in vibrant colors with playful flavors. Some daily flavors like bananas foster, salted caramel, Tybee turtle and blackberry lavender, remain constant. while seasonal flavors like gingerbread, bourbon eggnog and candy cane can be found during the holidays.

To Shippy, getting to work with her family and best friend, while making cookies everyday, is sheer “fun.” Even after all these years, she is still humbled each and every time someone compliments her cookies. “That doesn’t ever get old.”

When Shippy found out that a French macaron franchise is coming to Downtown Savannah, she confidently stated, “I do what I do, which means I do the best that I can. I use the best ingredients and the best quality. (French macarons) are the only thing that I do, so they better be pretty good because if not, then I need to figure out another product.”

“We are local. We are homemade.”