Mark your calendar: KidSyc and others ready new music 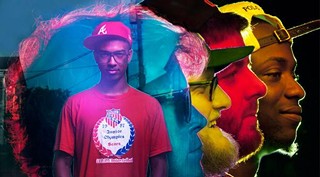 Capitol issue: KidSyc@Brandywine have a record coming out

The first month of 2012 will see the release of new material by several of Savannah's most compelling musical artists.

Last March, the hip hop experimenters known as KidSyc@Brandywine went to Los Angeles to claim their prize after winning the Georgia Lottery's All Access Music Search.

They cut five tracks in the legendary recording studios at Capitol Records, where everyone from Sinatra to the Beach Boys to Merle Haggard made some of their most enduring records. Savannah legend Johnny Mercer recorded there, too (he was, in fact, one of the founders of the Capitol label).

On Jan. 7, KidSyc@Brandywine will unleash these five tracks on a CD - and iTunes download - called The Capitol Records Sessions.

That evening, the band will celebrate the release with a performance bash at Congress Street Social Club.

Congratulations to Lloyd Harold (a.k.a. KidSyc), who's an art facilitator with AWOL, a writer and poet and a heck of a nice guy.

Cusses' self-titled full-length album (the band's first) is coming at the end of January; the band will throw a CD (and vinyl) release party Jan. 27 at the Jinx.

We've already reported the mid-January release of the second Dare Dukes album, Thugs and China Dolls, and the fact that Dare & the Blackstocks have a couple of celebratory shows in the works (Jan. 19 at the Sentient Bean, Jan. 20 at the Jinx to put the focus on the record's Jan. 17 drop date.

Here's something new, though: Thugs and China Dolls has been picked up by Athens' Mazarine Records, which is exciting news, marketing-wise.

See daredukes.com for a sneak preview of the new record.

The American Traditions Competition continues Jan. 26-28 with a series of performances from some of the best vocalists in America, at the Lutheran Church of the Ascension on Bull Street.