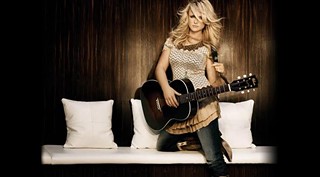 When Miranda Lambert was born, in 1983, the country charts were dominated by the likes of Kenny Rogers and the Oak Ridge Boys. Those guys are still around, of course, but several generations of country stars have come and gone in between.

In the wake of contemporary, down–home, sassily pretty gals Gretchen Wilson and Taylor Swift, Lambert has emerged as country’s “it” girl. She’s had three No. 1 country albums (Kerosene, Crazy Ex–Girlfriend and Revolution) and has topped the singles chart once (“The House That Built Me”) and come darn close with “White Liar,” “Gunpowder & Lead” and “Heart Like Mine.”

Tickets will be available shortly through etix.com.

In other Civic Center news, tickets are on sale now for a June 17 comedy show starring the massively talented Cedric the Entertainer. Cedric “and Friends” will be in the Johnny Mercer Theatre; tickets are $35–$55 at etix.

Coming in the clubs

Club dates to watch for: My Life With the Thrill Kill Cult plays the Wormhole May 4; Austin’s astonishing Bright Light Social Hour returns to Hang Fire May 20; Hammond B3 organ wizard Ike Stubblefield, who knocked everyone dead at the recent Savannah Music Festival, will be at Live Wire Music Hall May 21; the Jinx has American Aquarium onstage May 21, and Quintron & Miss Pussycat back May 23.

Savannah’s elusive acoustic wunderkind Dare Dukes makes two local appearances in May, both at the Sentient Bean: May 7 with Brandon Nelson McCoy and Hope for Agoldensummer, and May 26 with Rebecca Pronsky.

• Here’s one final reminder that the astonishing acoustic duo Montana Skies (Jonathan and Jennifer Adams, guitar and cello) are playing a benefit inside the in-progress Tybee Post Theater April 29. Tickets for the 7:30 p.m. show are $20.

• Decemberists on tour: Colin Meloy and the gang share the bill with Justin Townes Earle May 2 at the Cobb Center in Atlanta; the band plays Raleigh’s Amphitheatre June 11 (post–Bonnaroo) with Best Coast. You’re welcome.

• Michael Wainstein directs SCAD’s ambitious spring production, the timeless hippie musical Hair, May 12–22 at the Lucas Theatre. I saw it in Central Park a couple of years ago, and the music still resonates incredibly.