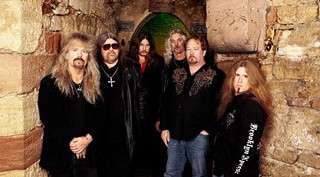 Hatchet job: The band today. Bobby Ingram is at far left, and next to him is Dave Hlubeck.

Another big name in rock ‘n’ roll from the late ’70s/early ’80s is coming to town It’ll probably be a great show.

But before we get to Molly Hatchet’s April 9 gig at Coach’s Corner, let’s review a few facts.

Musicians get old and die. They retire. They go off on their own. They have, for one reason or another (usually money), a falling out with other people in the band.

Band names, especially the successful ones, are trademarked.

But is Styx the same without principal singer/songwriter Dennis DeYoung? If Steve Perry’s not singing, is it still Journey? Can Foreigner be Foreigner without the distinctive wail of Lou Gramm?

Those guys are all out, but the bands carry on. Someone else owns the name.

The toughest case here is that of Lynyrd Skynyrd, which lost frontman and chief visionary Ronnie Van Zandt in that terrible 1977 Mississippi plane crash.

After a brave but financially unsuccessful period of trying to work using other names, the other guys opted to soldier on under the Skynyrd banner.

But today, who are they? The only holdover from the original unit is guitarist Gary Rossington, who survived the accident and, let’s be honest here, is the only member of Lynyrd Skynyrd who was actually in Lynyrd Skynyrd.

Hang on, you say. It’s not about the guys. It’s about the music. In the case of Skynyrd, it’s about celebrating an attitude, a rebel–flag waving, whisky–downing, good–old–boy way of life.

By the same token, if you want to mix up margaritas, wear Hawaiian shirts and do the “fins to the left” dance, what do you need Jimmy Buffett for?

Molly Hatchet was one of the most successful Florida–based boogie bands to come along in Skynyrd’s wake; darker, harder and less overtly Southern than their contemporaries, they struck an FM radio nerve and scored a few big hits — several of which still hold up incredibly well today.

When Molly Hatchet plays Coach’s April 9, it’ll be a six–piece band that will sound just as good — no doubt — as the hard–rockin’ Hatchet you remember. But lead guitarist Dave Hlubeck — incidentally one of the nicest guys you’ll ever meet — is the only one left from the glory days of Flirtin’ With Disaster.

Guitarist Bobby Ingram, who joined the band in 1984, several years after their last big success, is the “sole and legal owner of the name, likeness, and has full rights, title, goodwill and interest in the trademarked name” (that’s how it reads).

You ought to know what you’re paying for. That’s all I’m saying.

Tickets are $20 advance at Coach’s, and at Sunset Novelties on Abercorn.