THE TERM Cosmic American Music is inextricably tied to the late Gram Parsons and refers to a musical crossroads where country, folk and rock collide in a glorious psychedelia-kissed pileup.

So it goes on Way Out West, Marty Stuart’s latest studio effort that was produced by Heartbreakers guitarist Mike Campbell. The deep and rich mystique of California culture provided a font of inspiration for these 15 songs that found the Mississippi native taking his cracker-jack backing band, the Fabulous Superlatives, to the storied Capitol Records recording studio in Los Angeles to record a good chunk of the record. 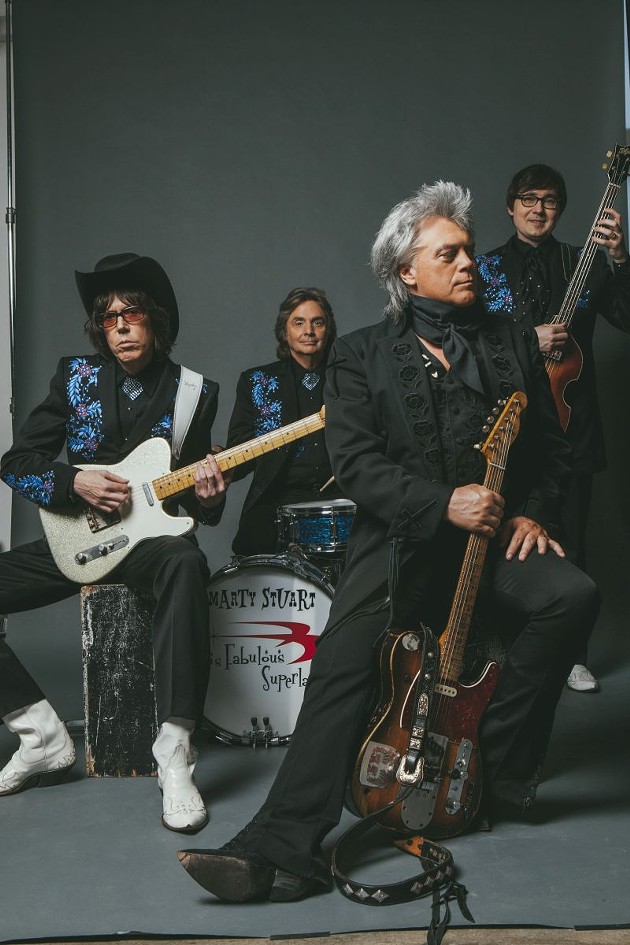 Marty Stuart and His Fabulous Superlatives are a highlight of Savannah Music Festival.

It’s a project that Stuart knew he needed to create on the left coast.

“Everything that came out of California captivated my kid mind in Mississippi,” Stuart tells us.

“[Way Out West] started with a song called ‘Mexico’ and the idea was that I wanted to capture a mood that was cinematic and reflected the space you experience out in the Mojave Desert. It would reflect that kind of openness with a little bit of a psychedelic touch to it. I also knew that I’d have a better shot of getting that kind of cinematic sound that I was looking for in California that I wouldn’t be able to get in Nashville.”

Marty and company play this week at the Ships of the Sea North Garden. It will be Stuart’s third appearance at the Savannah Music Festival.

With this kind of talent, Stuart and his compadres are firing on all cylinders, starting with the instrumental “Mojave,” which uses a combination of airy twang and dive-bombing chords to scale some of the soaring aural terrain traversed by surf rock god Dick Dale.

This menacing vibe continues on the vocal-free “Quicksand,” which uses a militaristic cadence and boatloads of echo to form a spiritual connection with Link Wray’s “Rumble.”

Elsewhere, Stuart does yeoman’s work tapping into his country music influences, be it Bakersfield (the trucker’s ode “Whole Lotta Highway [With a Million Miles to Go]”) or Marty Robbins (the twangy waltz “Lost On the Desert”).

One of Stuart’s best originals on this project, “Time Don’t Wait,” has Campbell joining the Fabulous Superlatives. It’s an infectious number that sounds like a recently discovered 1966-era Byrds outtake.

Equally impressive are a pair of obscure covers—a rollicking take on Benny Goodman’s “Air Mail Special” and the Johnny Cash-flavored title cut, which uses spoken vocals, an atmospheric production touch and meandering arrangements to paint a picture of one person going on a fever dream-soaked spiritual quest. It’s a collaboration that Campbell, who first played with Stuart on Cash’s 1996 album Unchained, enjoyed immensely.

“Working with Marty and the Superlatives was a blast and it was fast. My role was easy, just set up the sound and let them play,” Campbell explains. “Great guitars, great grooves, great vocals—they just have it all. This record is one of my favorite things that I have ever been involved with.”

With Way Out West out, Stuart and the Fabulous Superlatives are out on the road. And while many casual music fans may not know about Stuart’s deep ties to country music that found him cutting his teeth playing with bluegrass legend Lester Flatt as a mandolin-playing teen prodigy or later getting hired to help anchor Cash’s band, Stuart is eager to spread the gospel of American roots music.

With the high level at which he and his Fabulous Superlatives are playing, the 59-year-old singer-songwriter welcomes the challenge of bringing fellow believers into the fold by way of a well-placed live music experience.

“I think there’s a time in every band’s life, whether it’s the Rolling Stones or anyone else, where they end up in a [creative] place where they end up with what I call a blue halo or blue aura around them, where they’re at their peak if you go see them play live,” Stuart says.

“As a music fan, it’s the kind of experience that you wind up having where 20 years from now, you’ll look back and say that you saw that group at that particular time.

“I think that time is happening right now for the Fabulous Superlatives, and it’s certainly giving us motivation to live up to the band’s name,” he says.

“Right now, we’re winding across America, playing a lot of rock and roll rooms and finding a new audience. We’re introducing ourselves and our music to a new audience as well as inviting our old friends to come along, so that’s the mission at hand.”

I'm With Her: Watkins, Jarosz and O’Donovan combine for rich harmonies