PULSE's Rafaël Rozendaal is master of his domain

Artist uses the Internet as his canvas

The marriage of art and technology, which our annual PULSE Festival celebrates, is relatively new. "That's the beauty of it," says Rafaël Rozendaal. "So little has been done, you don't need to be a genius to invent something."

Rozendaal is a Dutch-Brazilian artist whose work is computer-generated; it's both clever and colorful, and his video installations—both large and small-scale—are among the most admired in the world today.

But this PULSE guest artist has also carved out a unique niche for himself: He creates works of video art that he sells as domain names. In short, his one-of-a-kind pieces are sold to collectors and aficionados, while still remaining public. You can see dozens of them at his complex but endlessly entertaining website, newrafael.com.

He's also bringing to Savannah what he calls BYOB (Bring Your Own Beamer). Video artists refer to their projectors as beamers, and numerous area artists have been invited, through the Telfair Museum, to come along and fill one of Rozendaal's rooms with whatever projections they choose. This should result in a dizzying cornucopia of sights and sounds, anarchic but somewhat organized.

Rozendaal, who lives in Berlin and New York City (and, he says, just about everywhere else the art world takes him), spoke to us this week.

Take me through the process: How did you get to establishing domain names as art?

Rafaël Rozendaal: At the time, a lot of people were making things online. A lot of people would put files somewhere on a website; artists would have a section called "Experiments," but they were just files. I thought that if I put each work in a domain name, it's not just a file or something that I have on my hard drive, it's really a work. It's really done. And it's easy to find. That was the initial idea, sort of like having a frame for a painting. But then also it's the title, and also it's the location, and it makes it easier to share and to remember. A Greek artist friend of mine came up with this idea that it should also be a sell-able thing. That it's an art object that can be bought and sold.

So the piece is in the hands of a private collector, but it's also public art. Anyone can call up the URL.

Rafaël Rozendaal: When the work is sold, the domain name is transferred to the owner. If you buy a work of mine, we transfer the domain name to you after you pay, and we together sign a contract saying that the work remains public. You're not going to change it into a private website.

Does the buyer have any input into the art? Is it like a commission?

Rafaël Rozendaal: They choose one of my works that are available. So they would talk to the gallery, and then we discuss it. I create freely on my own, completely autonomous and completely without questioning. I don't think too much; I just let it happen. I publish regularly, maybe once a month, and I do exhibitions. And usually the collector will speak to the gallery and say "Oh, that's interesting —is this one available?" And we go from there.

Devil's advocate. I like this one, I paid for it—how, exactly, does it belong to me?

Rafaël Rozendaal: Just like Google owns the domain google.com, and no one can take it from them, you own that domain. Your name is mentioned on the top of the website. To me, it's a combination of vanity and generosity. From the vanity aspect you can be proud, you've supported this artist and you're sharing it with the world. So it's an act of generosity as well, but you're also getting something back in the sense that people think "This guy is cool. He supports the arts" and "He has a vision to collect things that are not normal, but he's looking at the way things are moving instead of the way things are." People will appreciate that.

CS: Was this concept a hard sell?

Rafaël Rozendaal: It's a hard sell in the sense that you don't really need it. Everybody can live without an art website, and you can watch it for free. It's a tiny percentage of the viewers that actually buy it. Forty million viewers a year, not every one of them is buying a domain. It's not like something you see in an art fair and think "That would look great above my couch." There's a whole market for moving images, for video installations. The thing that I do different is, I want it to be public as well.

If the Rolling Stones had recorded songs and said "We're going to make it an edition of three," and you have to go to that museum to listen to the song, it would be kind of strange.

Tell me about Looking at Something, the Savannah installation.

Rafaël Rozendaal: It's a website and we made an installation version. A website kind of looks like a window, so you're looking out that window through your screen. And the installation will be two projections next to each other. A bit like two windows in a home. And you can decide what kind of weather you want. You use a track pad, like an Apple track pad like you have on your laptop, or with iMac.

Where did BYOB come from?

Rafaël Rozendaal: In 2010, I made the first edition with a friend in Berlin. Because all our friends were making moving images, usually those kinds of exhibitions are complicated, because you need a lot of equipment and blah blah blah. I though OK, if everybody takes care of their own gear, then we can set up an exhibition in five minutes. That was the idea, just a one-night exhibition, and it turned out to be so easy and so fun, with such good energy, immediately people were like "We should do this again, somewhere else." We open-sourced it. I put the idea online. There's a manual, and the manual reads "Find a space, invite many artists, and ask them to bring their projectors." That's all you need.

It's simple and easy and fun. Fun is something you don't normally associate with art. It's usually something serious and tedious. We noticed that people felt really empowered, and that was the goal for me. Because the Internet enabled anyone to share an idea, to anyone in the world, and I wanted to bring that spirit to the exhibition space. I don't curate every BYOB. It's very open.

This one in Savannah is not curated by me. I want people from the area to curate it, because then it's a little different every time. It's much more interesting that you get surprises. CS 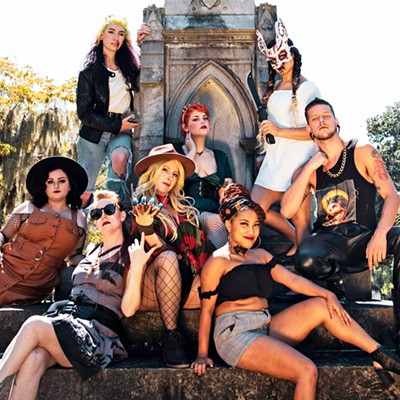