Matt Collett is best known for his work with The Garage, the studio he co-owned in Savannah until recently. He’s also hopped around in tons of bands over the years, primarily as a drummer but on other instruments as well. He’s a veteran musician, but in all of the time he’s been working he’s never properly released anything under his own name.

“I’ve always been filling in for other people, producing, and doing all that stuff, but during that time I never really found a project that I felt fully represented what I wanted to do,” Collett tells Connect. “These songs on the album are all the ones that I played on acoustic when I’d get home from working on other people’s music.”

Some of the music on Flood, Collett’s solo debut, was written a decade ago. Some of it was written very recently. But it’s all music that Collett feels best represents where he is musically.

“I grew up here in Savannah, and I played in church first but at soon as I found the DIY heavy scene, I was stuck,” he says.

“That was where I found a home and a community that I loved. It really was the home base for everything, not necessarily just musically. As I got older, I started taking gigs that were fun and an opportunity to learn. I wound up getting exposed to a lot of music that I wouldn’t necessarily have listened to, but because I played it I learned to appreciate things that I wouldn’t have otherwise.”

Collett, who notably spent several years as guitarist and singer for the band Bear Fight, said it took a while to figure out what musical direction to take the project—especially in an age where music can be molded and diverted in almost any direction from a production standpoint.

“I had to learn to just let it be whatever it was, and be able to appreciate that and let it work,” he says of the process of writing and producing the songs.

With his musical taste being varied, ranging from Americana to heavier rock and punk, Collett says he was able to find an overarching thread that would ultimately pull the songs together.

“The music that I find myself listening to and wanting to play the most is music that has emotional content as well as an aesthetic or sound that’s representative of that. Epic, full, pretty, ambient but still heavy,” he says. 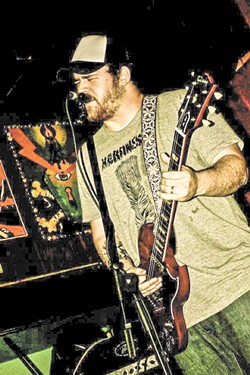 “Flood,” the title track, is a song that Collett says is the most recently-written one on the album.

“There has been a lot of loss in the community over the last few years, and there’s a shared feeling of loss. And in this time, too, everything is uncertain. We’re in a situation now where we’re being forced to think about that,” he says.

“‘Flood’ is about being present and holding on to the people that you’ve got while you have them. There’s a friend of mine who was in every band I’d been in—we toured all over together. He had a 10-year battle with drugs, and was in and out of jail. He was an amazing person, and me saying that he passed away is a loss isn’t something I own. Everyone that knew him feels that. I wrote that song after he passed away.”

Collett is prepping the album—which was recorded at both The Garage and Low Watt Recording—at a time when people need music more than ever, and it’s appropriate for him as an artist who used these songs to help him get through his own struggles.

“These are the songs that I wrote to get through all the shit that has gone on in my life and the community,” he says. “If I can share them, that’s the goal.”