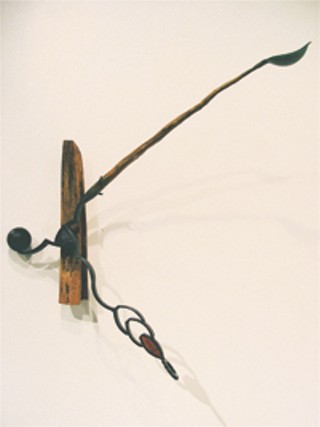 The alchemist is a Master of Fire. It is with fire that he

controls the passage of matter from one state to another.

In ancient cultures, before the spiritual and the practical were forever separated, before Descartes told us that matter is only mass and extension in space, matter was also an aspect and function of God, not something divorced from spirit, but its necessary complement. By itself, matter had the mysterious potential for taking on form.

And when it did so, those perceptible objects retained the stamp of its active counterpart, the Spirit. But now we have a science based totally on quantitative analysis which is blind to the many-sided essence of things.

This is the reason, Titus Burkhardt (Alchemy), tells us that science and art, which at one time were almost synonymous, are now completely at odds, and why beauty, for modern science, offers not the smallest avenue towards knowledge.

Kinetic sculpture has always been marginal to the mainstream contemporary art world. The word “kinetic” does not even appear in the index of “Art in Theory 1900-1990” an overall coverage of 20th century art movements and ideas. When mention is made of kinetic art it is usually to Jean Tinguely’s machine sculptures but in the 1960s there were many practitioners of this art the majority of whom came from South America and Asia.

One of the most important kinetic artists I knew was the Filipino, David Medalla, who created Bubble Machines, sculptures from soap bubbles, and “Mud Machine”1967 in which sponges on revolving discs created paintings with mud. Museums exist to display the static work of art and obviously, these kinds of “ephemeral” works are awkward if not impossible for museums and galleries to handle – thus making them very attractive projects for those who desire an avant-garde presence outside of such cloistered and rigid environments.

And, importantly, a kinetic work is a collaboration between art and science with its processes of material transformation and the use of the elements of fire, electricity and magnetism. In this interdisciplinary approach, it undermines the rigid separation and specialization of several centuries of European thought. In proposing a unification of art and science, this show takes us back to previous global practices of alchemy and shamanism.

Matt Toole’s exhibition is divided into three parts: his own kinetic sculptures, the sculptures of his young students in the summer art camp, and the photo and video documentation of his performances in Scotland, Illinois, Georgia and Minnesota. His kinetic sculptures are beautifully constructed, very elegant, polished assemblages of found objects – bones, roots, driftwood, brass fittings, steel cogs, wheels and gears – all assembled and welded seamlessly into new forms that are both familiar and mysterious.

The wall sculptures resemble propellers with two or three blades on a central axis, and the works on pedestals have the qualities of pendulums or balances. Although the viewer is constantly admonished “Do Not Touch,” there’s a real desire to see how the sculptures look in flight.

“Dipper,” one of the wall works, is a three-bladed form radiating from a small metal triangle fixed to a vertical piece of found wood. In alchemy, the triangle that points down is a chalice, representing water and the one that points upward is the blade, representing fire. In “Dipper,” the triangle is in the fire position. The protrusion from the top point of the triangle ends in a leaf that becomes the dipper; the one from the bottom right ends in a cogged wheel; and the one at the bottom left ends in a solid metal ball. Surely this work is meant to reference the ancient triskelion symbol often associated with the Greek God of fire and metallurgy, Hephaestus.

Looking at the works of his students, it seems that teaching is, for Toole, of equal value to art making. “To be a teacher,” said the artist, Joseph Beuys in 1969, “is my greatest work of art.” And, like Beuys, Toole teaches, performs and makes sculptures from found objects.

Toole’s students represented here range in ages from 6 to 14, and from a supply of such disparate objects as pine cones, ceiling fan pulls, computer keyboard letters, clothes pegs, etc., they have assembled works that recall the Surrealist object-poems with their surprising titles charged with wit and meaning. Toole probably finds working with them an inspiration.

It is possible that Toole regards his teaching, sculpture and performing as of equal importance, but I cannot help but feel that his greatest passion must be his performances with fire and iron. The photos and the video show the performance site after dark, with the artist pouring molten iron from a tower into a receptacle, creating a kind of Mephistophelean fireworks against the black sky. We are reminded how mining and metallurgy has altered our existence, and with what trepidation man must have first approached the sacred earth to extract the ores he needed.

Which brings us round to recognizing reference in the kinetic sculptures to the position of sexuality in ancient thought. Two thoughts occur in looking at these sculptures. First, that everything IS nature - vegetable species were divided into male and female, as were the metals and stones, including the objects made by man - and that because of that, all is sexually charged. The second thought is that if everything is living, then everything is in constant motion. (kinetic, whether actually “moving” or not).

The sexual classification was based on the resemblance to human genitalia. In the pedestal sculpture, “Root Bobber,” with its penis shaped root, the resemblance to male genitalia is unmistakable. Here we see an object made “living” by its relationship to human generation. The mine, itself, was often denoted as the “womb” which explains the fear of man’s transgression into the body of the Great Mother, Earth. All of these metaphors enrich and deepen the experience of the viewer, whether they are all seen at the moment consciously or not.

And we have an opportunity to view/participate in a Matt Toole performance on Friday, July 26, at the area outside the Roundhouse on MLK Boulevard. He has given it the working title, “Stairway to Hephaestus – or – the Heart of Vulcan’s Furnace” and there will be all-day events leading up to the 7:00 performance.

It is not often Savannah gets performance of this complexity and discipline. And the sculptures alone, beautiful as they are, require the performance to set their context. For it is within the ancient human gestures of forging and smelting that the archaic memory of the mythic and spiritual meanings embedded in the act of transformation is experienced. This may be your one chance at alchemy. 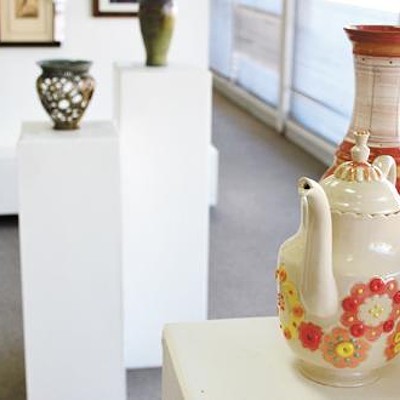 'From India with Ink'