Matthew and a man without a plan 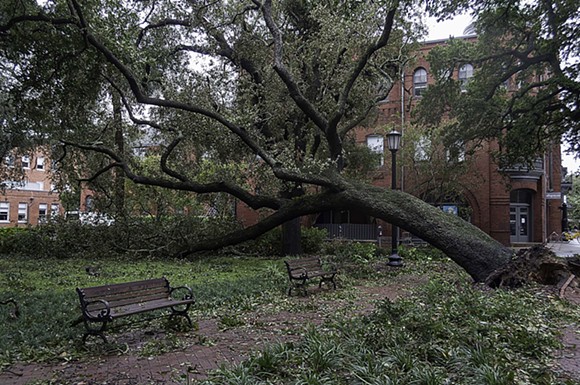 AS THE warnings built, and the storm approached last week, my expectation was that the storm would somehow pass us by, as every other hurricane had since I moved here 10 years ago, from Washington, DC.

The people on the Weather Channel talked doom and gloom, but they always do. They always find a way to get Jim Cantore out in high winds and stinging rain, showing us not only how bad it is “out there” but, of course, how tough he is. With my condo on the third floor of my building, flooding was not a concern.

First Matthew went through Haiti, leaving tremendous destruction and loss of life behind. That was not unexpected, except for the scale of the loss of life due to the abject poverty and substandard living conditions there. The pictures came in, and they were not dissimilar to what always occurs when a hurricane hits an impoverished area of the developing world. Homes destroyed, massive flooding, and widespread loss of life, requiring a massive response in aid from other countries.

Matthew continued on through the Bahamas, and on the Wednesday when that was occurring, I went to my local Kroger, on Abercorn across from Savannah Mall, and found it busier than I had ever seen it in all my years shopping there. Staples like bread, water, milk, and eggs were in short supply or already gone. People shopped with looks of concern and worry on their faces.

S.C. Gov. Nikki Haley had already announced a mandatory evacuation from all coastal areas, and a similar order was expected here. Having no family in the area, and with most of my friends already planning to leave, I had no plan of my own.

If I left, how far inland would I have to drive to be safe? How hard would it be to find a motel that would take in my cat and I? How would my cat act all that time in the car? She gets very unhappy in just the five-mile drive to the vet.

All of these concerns ultimately led me to decide to stay and ride it out.

Looking around the parking lot of my condo development Thursday morning, I was a bit surprised to see how many cars were still here. It looked like I would have plenty of company if I stayed, and that proved to be the case.

Watching the Weather Channel constantly, they kept showing the storm track, and talking about all the destruction coming to Florida.

Some of my Facebook friends who live on the East coast of Florida had been posting regularly about their preparations, and most of them were staying put as well. Fortunately they all survived without any major damage to their homes and selves.

As the day wore on, I kept considering leaving, and kept talking myself out of it. I had a reasonable amount of food that did not require refrigeration or preparation, like cookies, chips, and donuts, and plenty of ice to keep the beer cold if/when the power went out, fresh batteries in my flashlights and radio, candles and matches.

My bathtub was full of water, as was every other available container I had, so I considered myself as ready as I could be. I wondered if I should tape my windows, so I googled that, and found out it was not recommended.

Friday morning arrived, and Matthew was heading to Daytona Beach and Jacksonville, having already passed Palm Beach and other areas of SE Florida.

The Weather Channel got a Coast Guard officer on the phone, and when he said, “No, we haven’t had to rescue anyone. We haven’t even gotten any calls,” they immediately cut him off and went looking for some destruction and high winds.

They quickly found some in Daytona, with a classic hurricane cliché. A gas station pump canopy torn off and flapping in the breeze, with an excited reporter giving the account.

Looking forward to watching the Nationals-Dodgers playoff game kept me focused through the afternoon, and I was grateful to still have power when the game started. Unfortunately, our power went out in the 4th inning

I then put some beers in a cooler, made sure all my windows were closed, and went down to the ground floor to see if any of my neighbors were around. I found two from the second floor and two from the first floor, on the edge of the breezeway, watching the trees and bushes blow around.

I offered everyone a beer, but they all had plenty of their own, so we sat there, watched, drank, and talked until about 11 p.m., when the wind and rain got so strong we all went back to our units to hunker down.

Getting a small signal on my phone, I was able to find out that the Nationals had lost to the Dodgers, 4-3. I sat on my bed for a while, with candles lit, watching the trees and bushes whip around, and listen to the wind howl.

Sleep finally came around 1 a.m., but it was fitful. Waking up every couple of hours, gratefully looking outside to see that my car had not been crushed, and that all the trees were still standing.

When the sun creeped over the horizon Saturday morning, the rain was still coming down, but not sideways, and the wind was abating. I went downstairs to find my neighbors clustered around a first floor unit where two of my neighbors had stayed. They had a small generator, with sufficient power to run a coffee maker, and recharge all our phones.

Assessing the damage, we fully realized how lucky we had been, with all the buildings intact, no windows blown out in our building, and none of our cars or trucks damaged. Finding a local radio station on, I listened to stories of the night before from around the area, and learned even more how fortunate we had been, with reports of numerous large trees uprooted and blocking roads all over the area and the Windsor Forest neighborhood, something I saw firsthand in a drive around the neighborhood on Sunday.

Water and donuts for breakfast tasted great, and I was able to text my siblings, in St. Louis, Buffalo, and DC that I was OK.

My neighbors and I hung out and swapped stories most of the day Saturday, and one of them had a box of MRE’s that he shared with all of us, though I chose to pass, for no special reason, except that I had eaten a ham, turkey, and cheese sandwich earlier that afternoon, keeping that in a cooler as well.

One of the neighbors gave me a couple of candles she didn’t like, as mine were just about gone. I went to bed Saturday night with some windows open and sirens howling in the distance, a post-storm lullaby.

Sunday morning I felt the need for a shower, so I let the water out of the tub, and showered by candlelight, which proved not to be as romantic as it sounds. My neighbors were gathered around the generator, and we talked some more about our good fortune. One of them had driven around and said that there were downed trees all over the neighborhood, but she had not seen any down on the property.

I drove around a little myself, out to Abercorn, around the mall, where a staging area for utility trucks had been set up, around to Rio Rd., and back home, where I found several utility trucks working on getting our power back on. I came back to my unit, and let my neighbors know that a crew was working just outside our gate. A bit before noon on Sunday, the power came back on, just in time for me to set my lineups on my fantasy football teams.

Living through a hurricane was never on my bucket list, and I’m still not entirely sure that staying was the right thing to do, considering the scope of the damage and destruction in the area, something I have never seen before in my life, anyplace I have lived, but it was quite an adventure.