The third Matt's Moon River Cruise will begin with a press conference at 12:30 p.m. in Ellis Square, followed by a recreational ride through Savannah's Historic neighborhoods. The ride will arrive at the Moon River beer Garden at 2 p.m., for refreshments, a silent auction, a raffle, and music from Waits & Co. Tickets available online at bicyclecampaign.org/shop/matts-moon-river-cruise-2015/ and at the door, and include T-shirt (while supplies last) and refreshments. 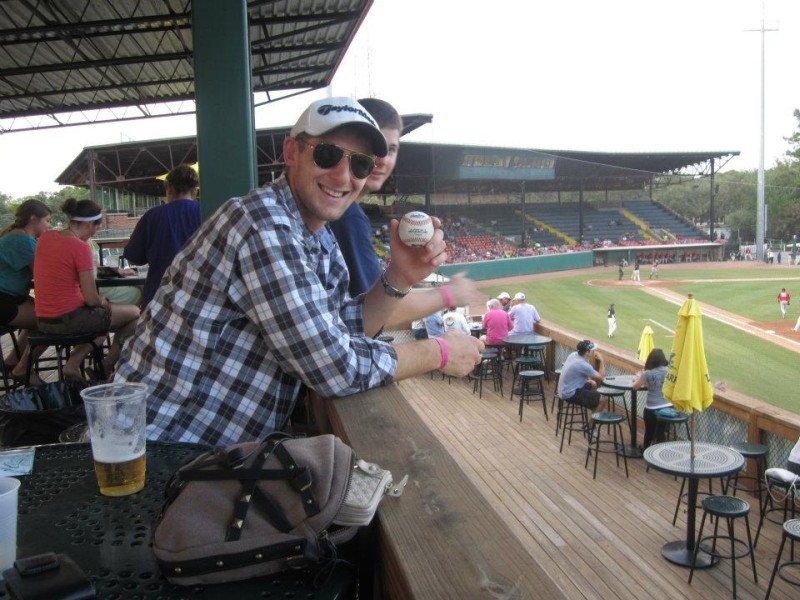 The late Matt Kohler in an archive shot of him enjoying one of his favorite pasttimes, a Sand Gnats baseball game.

A VIDEO demonstrating "how to properly and respectfully pass a cyclist" has been circulating via social media recently. It's been met with praise from people who ride bikes.

Raising awareness of how to safely share the road is also the goal behind the Third Annual Matt's Moon River Cruise event, scheduled for May 2 at Moon River Brewing Company. It's named for Matt Kohler, who was hit from behind and killed by a driver in Bloomingdale in 2012.

Debbie Kohler, Matt's mother, has become an advocate for safer streets in Georgia. In March she was among a group of speakers, which included Gov. Nathan Deal and other elected officials, who addressed the 10th Annual Georgia Rides to the Capitol event.

"When I talk to people and tell my story about how Matthew was riding his bicycle and was doing all the right things, but was rear ended and killed, I have yet to run into a single person who has not been appalled," Kohler said.

"The most common response is 'I'm sorry for your loss,' which is truly expected. Yet others come to me and express true gratitude that I will tell Matthew's story in hopes of getting the word out that bicyclists have a right to ride on the right side of the road, and that a car must yield to the bicyclist and give him or her three feet in order to ensure safety for all involved."

In his job as executive director of Georgia Bikes!, a statewide advocacy organization, Brent Buice provides training to law enforcement agencies on bicyclists' rights and responsibilities.

"I have definitely found that most traffic officers are aware of the three feet safe passing law," he said.

"Awareness among the general driving public could always be better. The vast majority of motorists understand that people on bikes are vulnerable and they exercise caution when passing them, but I still receive a regular stream of emails and calls from people across the state about terrifying near misses with impatient drivers."

"The other amazing thing that I hear from people is the number that have been in hit and run accidents with cars, in which cars graze them, knock them off their bikes and keep going," she said. "Some injuries are minor and others are more severe."

She urged people to ask themselves, "How would I feel if that was my son, daughter, wife, husband, etc.?"

Plenty of people, from across the cycling spectrum from competitive road cyclists to commuters, have had negative encounters with motorists. That's why Caila Brown, vice chair of the Savannah Bicycle Campaign, hopes local cycling organizations and individual bicyclists will participate in the event.

"It would be fantastic to see a diverse group of local cyclists come out to support this event," she said. "The conversations started here affect a wide range of cyclists including transportational, long distance riders and recreational cyclists."

One conversation other communities are having is about more vigorous enforcement of laws intended to protect people on bikes.

"It only takes a moment's inattention or recklessness to turn a motor vehicle into a deadly weapon," Buice said. "I'd like to see cities in Georgia follow the lead of Austin and Chattanooga, whose police departments engage in consistent, targeted educational and enforcement campaigns to increase adherence to safe passing laws."

While education and enforcement are important, Kohler said Georgia also needs to invest in bicycling facilities.

"An old saying in college was 'work expands to fill the time allowed.' The same can be said for streets and cars. Cars will just expand to fill the street lanes that we add. Why are we not adding bicycle lanes and help avoid congestion?"

Until bicycle infrastructure catches up with demand, Kohler has a simple message for drivers who become impatient or angry while waiting to pass people who ride bikes:

"If you foolishly cause danger to that bicyclist and cause an accident, your life and the bicyclist's will be ruined forever," she said. "And you certainly will not make it to your destination on time." cs