IT MAY FEEL like years ago now, but in March, Savannah was in an anxious holding pattern.

As COVID-19 ravaged the rest of the world, we donned our masks and watched the numbers for our area rise each day.

Jennifer Smith Green was one of us, watching the virus and wondering what she could do to help. On Facebook, she came across a photo of New York ER workers eating lunch. The caption excitedly thanked whoever had brought the food to them that day.

“It just stirred something in my head,” said Green.

A former PA, Green reached out to her nurse friends to ask about the possibility of starting something similar for Savannah’s nurses. If she collected donations and sent food, would that be a welcome idea?

The answer was a resounding yes, and Green headed to Facebook to start asking for donations. Before she knew it, her post started gaining so much attention that she created her group, Meals for Medical. 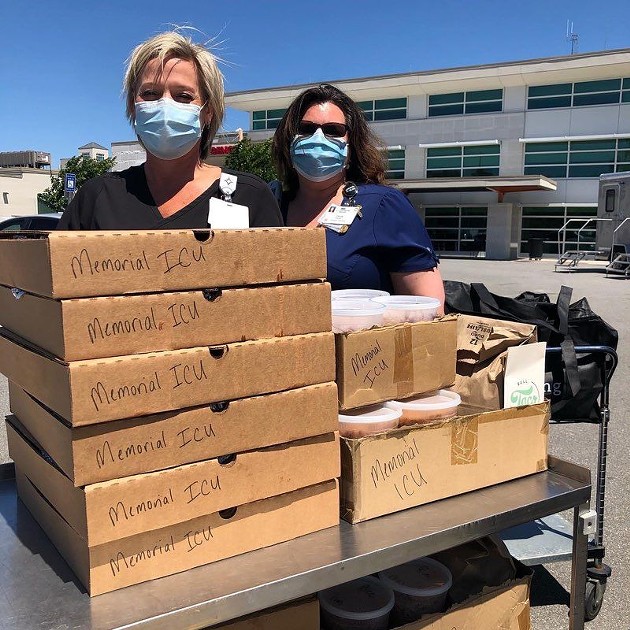 Nurses with their delivered lunches.

“It went from having the idea, thinking I would maybe send a meal or two and I was going to try to hit each ER, to turning into this huge success where, before I knew it, I had money coming to where I was able to expand to add the ICUs, and then the isolation units, and then the Chatham EMS, and then we started doing day shift and night shift for a couple weeks,” remembers Green. “Once the momentum got going, it just kept going and going. It turned into a really big thing.”

Armed with a legal pad and an Excel spreadsheet, Green worked tirelessly—and mostly alone—to coordinate with restaurants and nurses to get meals made and delivered.

“It was almost overwhelming at the amount of support and phone calls and people wanting to donate, businesses wanting to donate, restaurants saying, ‘Hey, how can we get in on this—literally, the phone was ringing off the hook,” says Green. “I’d be on the phone and have another phone call or two come in. I’ve never been that busy. I was working more hours than I did as a full-time PA, but I didn’t want to lose the momentum. I was like, ‘I’m just going to do as much as I can, because clearly, people want to donate. Everyone wants to help support medical workers.’”

Green was onto something. For those first few weeks, as we waited for the other shoe to drop, it was easy to feel helpless. Meals for Medical was an easy way for people to help, and it benefitted both medical workers and local businesses, two groups who’d be hit hardest by the pandemic.

While she’d originally planned on filing for nonprofit status, Green realized that Meals for Medical was more of a short-term need.

As such, she informed each donor that their donation was not tax-deductible, but the warning fell on deaf ears.

“People just left and right said, ‘We don’t care about the tax exemption. We are just happy we can do something to help,’” says Green. “It was very much that feeling that this was their little part they could do to help.”

Part of Green’s planning hinged on which restaurants could keep up with the demand. Some restaurants were able to make the required 360 meals a day, but others just couldn’t keep up.’ So, some days Green supplied meals from just one provider, and some days she used multiple meal providers. 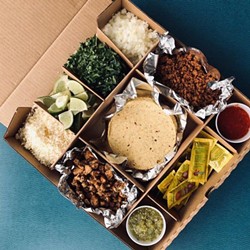 “Some days were more logistically challenging than others,” she admits. “It literally is just me; I don’t have a team. Of course, I called on my cousins and my friends—‘Hey, can you please get this delivery and take it for me?’

“Ultimately, most of the restaurants did their own delivery, but there there were definitely—especially in the beginning—a lot that I had to personally deliver to make it happen.”

“One of my friends one day texted me and said, ‘Is there anything coming today? We’ve already coded so many patients this morning—it’s been the worst day ever,’” says Green. “They look forward to some brightness. They might be going to get a pack of crackers out of the vending machine for lunch, but instead they had something in the break room that was good. We were providing this little bit of peace, or this little brightness with having something exciting and different for lunch.”

Green says that ultimately, there were over 12,000 meals delivered, but that doesn’t include donated items that didn’t make it onto her books.

“It’s a great feeling to know that even though this hasn’t necessarily changed the course of coronavirus or made any huge impact in those kinds of ways, it makes me feel like I accomplished some type of community spirits, that we provided something that was a need during this crazy, unexpected time that no one really knew to plan or prepare for.”

What’s next? Green isn’t sure. She certainly plans to continue supporting local business and has run a few ideas by business owners.

She also hasn’t ruled out forming a nonprofit in the future if there’s a continued need.

But above all, Green wants people to continue to appreciate and thank their medical workers.

“It doesn’t always have to be a meal or something, but just remembering to say thanks is huge,” she says. “It’s such a rewarding feeling to have a patient or someone you cared for tell you, ‘Thank you for what you did for me.’ That means more than many of the other things that come along with medicine.”

Speaking of Meals For Medical , Pandemic

Wine Fairies and Beer Bastards: Common ground during the pandemic