Meet me at the Maté Factor

A different kind of beverage brewing at Habersham and Hall 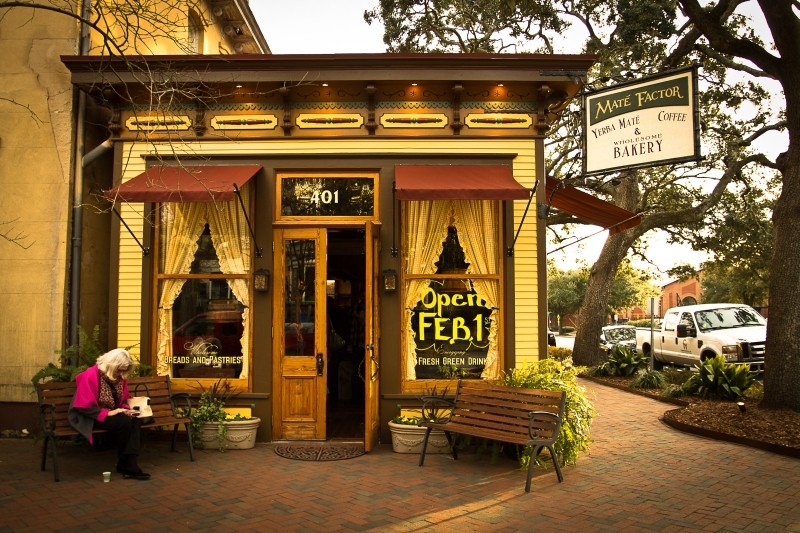 Jon Waits/@jwaitsphoto
Brian and Shelevah Fenster welcome guests to the new café owned and operated by the Twelve Tribes community.

WITH its roasty, toasty flavor and funny name, yerba maté hasn't hit the Starbucks drive-thru menu quite yet.

But like Indian chai tea and Italian espresso lattes before that, the exotic herbal drink is fast finding its way into American hot-cuppa-culture.

Celebrated for millennia by the indigenous peoples of South America, yerba maté is a tea brewed with leaves from a type of holly tree and still plays a part in social and cultural rituals in Argentina and Brazil. Hipsters and health freaks dig it because it’s a caffeine-like fix with benefits, brimming with antioxidants and delivering a buzz far gentler on the stomach and nerves than coffee.

Plus, it’s traditionally served in a cured gourd and sipped through a silver straw called a bombilla, which is way cooler than a paper cup with a plastic lid.

Progressive palates can give it a try at Savananh’s new maté-dedicated café, the Maté Factor, which opened its doors this week at the corner of Habersham and Hall.

Cozy as a mountain cabin with exquisite wooden flourishes and flowery wrought iron details, the café’s ambience guarantees that you won’t want to take your beverage to go. The narrow historic building looks like has been taken over by industrious elves, the interior transformed into a two-level seating area with a sunny loft and a sunken alcove overseen by a two-toned timber sunburst. Colorful murals abound. Benches are covered with tooled leather and hammered rivets, the artisanal efforts of the proprietors’ loving hands. 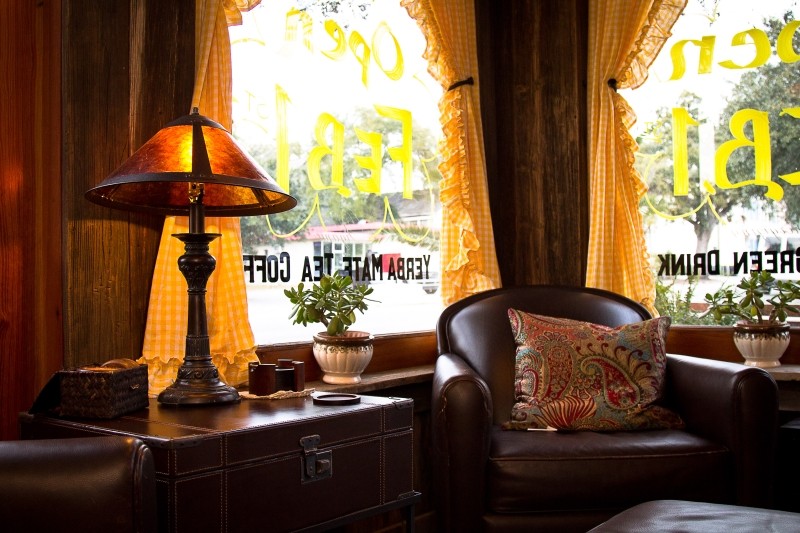 A stone’s throw from the downtown Kroger, the Maté Factor is owned and operated by the Twelve Tribes Community, a spiritual group that has lived communally in the neighborhood for over a decade. Renowned for their carpentry skills, the men are recognizable by their ponytails and beards; the women dress in bloomers and can often be seen herding small children in Forsyth Park with beatific smiles.

Part of a network of around 50 communities around the world, the local Twelve Tribes circle is comprised of several families and a handful of singles who live, work and share their resources as interpreted from the Bible in Acts 2:44, “All who believed were together and shared all things in common.”

Founded in the 1970s, the communes evolved out of the Jesus Movement and have had their share of controversy surrounding the group’s ascetic philosophies. While members do eschew many aspects of modern culture, the locals welcome questions about their lifestyle and consider themselves a part of Savannah’s larger community.

“We want people to get to know us,” says Brian Fenster, 41, who has lived in Twelve Tribes communities around the country for 20 years and relocated to Savannah last year to help open the Maté Factor, the latest in a chain owned by the group. 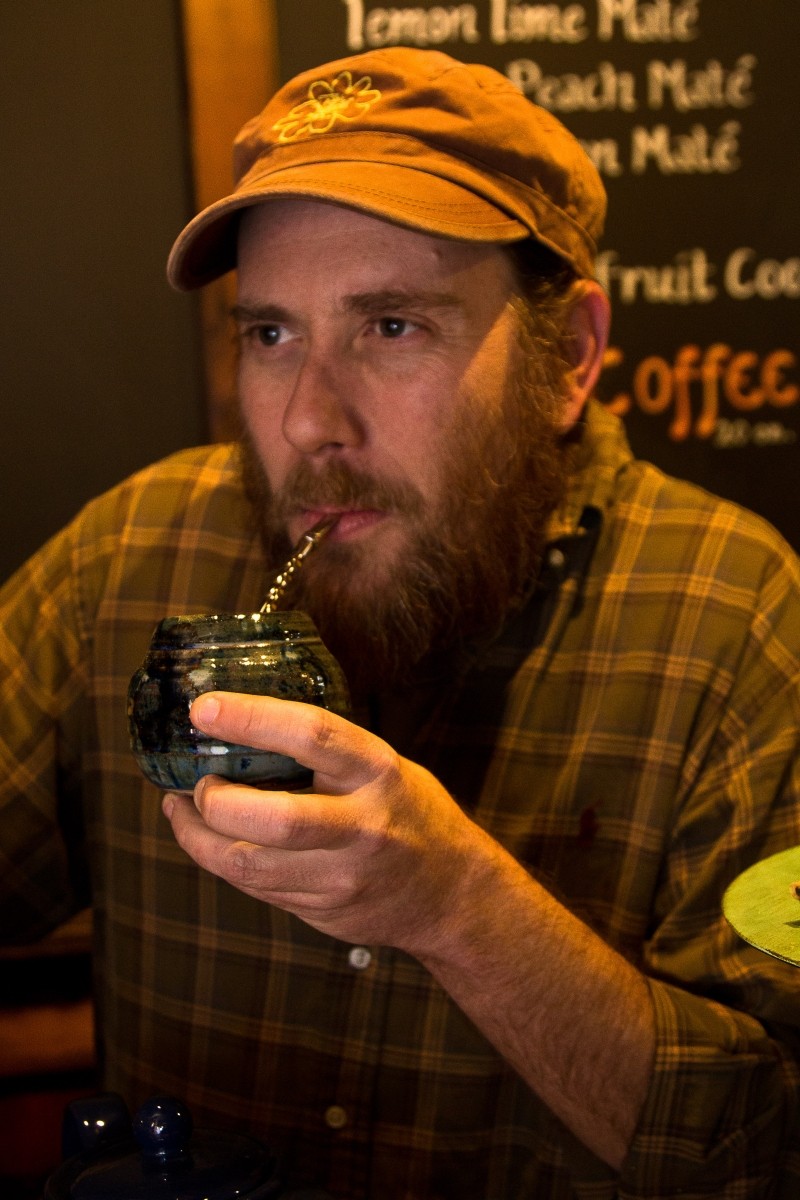 Fenster explains that organization supports itself by creating industries that allow members to stay close to their families during the workday. The local community has supported itself through its Commonwealth Construction company since the early 2000s and also owns a tall ship that was docked on River Street until recently.

The original Twelve Tribes communes of the 1970s sustained themselves with a series of 24-hour sandwich shops called the Yellow Deli, but the new café is the Savannah tribe’s first foray into food and drink.

“Our Southern communities were based on a construction economy, and when the economy went south a few years ago, we had to find new footing,” explains Fenster, adding that Twelve Tribes communities do not claim non-profit church status and pay property and income taxes.

In the years it took to get the café up to code, Commonwealth Construction has recovered its workload and continues to thrive, but the new café and bakery is a welcome return to what Fenster calls the “original pattern” of the founding members.

“When you live in community, you’re basically running a catering service anyway,” laughs Fenster as his wife, Shelevah, readies the bakery case and his one-year old daughter, Amidah, naps in a baby carrier nearby.

“We don’t do white sugar here, ever,” assures Fenster.

Fresh loaves of sourdough and whole wheat bread are baked on site or delivered from the Twelve Tribes bakery in Brunswick, and milk and cheese come fresh from nearby Southern Swiss Dairy.

Open every day except Saturday when members observe the Sabbath, The Maté Factor begins service at 6 a.m. weekdays and 8 a.m. on Sunday and closes at 8 p.m. except for Fridays, when the doors shut at 4 p.m. The wi-fi connection is free and runs strong.

“This is delicious!” exclaimed Heidi Berkeley, who owns the nearby gift shop Folkorico with her husband, Joe.

Seasoned global travelers, they marveled at the level of craftsmanship put into the café, not often seen in U.S. cities anymore.

“It’s really unique,” said Joe. “This is such a wonderful addition to the neighborhood.”

Judging from the happy faces, Twelve Tribes’ return to the food and drink business will be a righteous success, and there are murmurs of a three-story Yellow Deli on Forsyth Park in the works.

Fenster doesn’t discount the possibility of growing the Twelve Tribes presence in Savannah’s foodie scene, pointing out that there’s nothing unholy about prosperity.

“It’s what you do when you get it that really maps out where your values are,” he says with a smile.