LET'S FACE it, ladies: No amount of Pilates, Prozac or Botox can mask the fact not a one of us can escape the biological reality of menopause.

Yet even in 2015, when TV news anchors can discuss Kim Kardashian’s Brazilian wax job without batting an eyelash extension, hardly anyone talks about the hot flashes, sluggish metabolism and hell-hath-no-fury rage that accompany what’s still mostly referred to in whispers as “The Change.”

For those who received their reproductive education from Twitter, menopause is the time in a women’s life when her body no longer produces viable baby-making eggs after 35 or so years of kicking one out every month.

Usually taking place between age 45-55 and lasting 1-2 years, menopause is characterized by fluctuating hormones that may or may not cause women in the throes of it to experience sweating, sleeplessness and the uncontrollable urge to slap your sassy face.

While some cultures honor this transition by acknowledging the special wisdom afforded to females of a certain age, American society’s obsession with youth has left most women with perfunctory euphemisms that are clinical at best.

At worst, they’re sexist and disenfranchising, referring to older women as “dried up” (as if value resides solely in the ovaries) and perpetuating a shameful silence around menopause.

But one play is changing the way we talk about “the Change,” one giggle at a time.

When it debuted in 2001 in a tiny theater in Orlando, Menopause the Musical caused an immediate stir among the country’s long-ignored crones. It quickly grew a cult following, packing big houses in Los Angeles, Chicago and Boston and enjoying a run off-Broadway. It’s been performed all over the world from Israel to New Zealand, and currently has year-round booking at Harrah’s in Las Vegas.

Savannahians have the chance to find out what the hysteria is about when the show comes to the Civic Center for one night only this Tuesday, May 5.

Set at a lingerie sale in Bloomingdale’s department store, the plot revolves around four female archetypes dealing with middle age and expanding mid-sections. The Professional, the Aging Soap Star, Earth Mother and Housewife find familiarity in other’s experiences, which is exactly what playwright Jeanie Linders hopes will happen for audience members.

“When it was my time, I thought I was the only one. I thought there was something wrong with me,” recalls Linders in a video interview posted on the play’s website.

To cope with her symptoms, she came up with lyrical parodies to some of her favorite songs, resulting in sing-a-long favorites like “Stayin’ Awake” and “Puff, My God, I’m Dragging.”

While theater critics rolled their eyes, the lukewarm reviews couldn’t deny that the show resonates far and wide.

“Let’s face it, it’s not Macbeth. But women get it,” says Linders with a shrug. “It offers women a point of relationship so they know they’re not alone.”

While the musical first found traction with Baby Boomers, younger generations have begun filling the seats and humming the golden oldies. And the audiences aren’t only made up of women.

“Men love the show. They’re the ones who come up to us afterward and tell us their wives and sisters are going through it,” says Atlanta-based actress Ingrid Cole, who has been touring with the show as the sleepless Earth Mother since 2005.

“The reason why it’s such a huge hit is because it’s so universal. It doesn’t matter what continent you’re on or what language you speak or even who you voted for—everyone is going to go through menopause.”

“My grandmother couldn’t even say the word ‘menopause,’” she exclaims. “Don’t underestimate what an effect this has. Just the laughing takes it to a different level.”

At 45, Cole actually hasn’t entered menopause yet, but her longstanding role has prepared her well.

“After ten years of singing about it, I fully know what to expect when it happens,” she laughs. 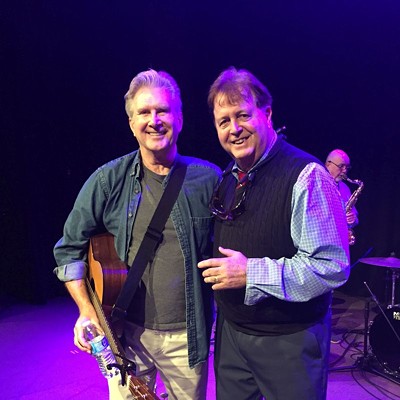